By 1872, many of the area tribes in Wyoming were living on reservations and Governor John Campbell reported that those who were not would hopefully be removed to reservations in South Dakota soon, freeing up some 20,000 square miles for stockmen, farmers, and miners of Wyoming Territory. The next year, a Government Commission met with the Sioux, Northern Arapaho, and Northern Cheyenne at the Red Cloud Agency in Nebraska, but failed in their efforts to persuade them to relinquish their treaty rights in the Big Horn Mountains.

In 1874, in direct violation of the Fort Laramie Treaty of 1868, General George Custer led a military party into the Black Hills, ostensibly to make a rough survey. Lack of open hostilities from the Indians during this an early Big Horn expedition led to the premature conclusion that the Indians’ dependence on food and supplies from the Indian agencies had broken their will to resist.

They were wrong. Though the number of isolated depredations would never be as high as it was during the bloody years of 1865-1870, they would continue, culminating in the Great Sioux War of 1876-77.

From September 10-13, 1872 a number of Indians skirmished with a group of soldiers from the Second Cavalry between Beaver Creek and Sweet Water, Wyoming. Though the fighting continued for several days, only one Indian was wounded. 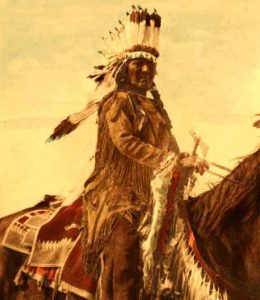 On October 9, 1872, Michael Henan was killed in the Popo Agie Valley. Putting the area residents on edge, the murder was blamed on the Arapaho. Later, historians reported that it very much could have been the work of white horse thieves. The next day, a group of men went looking for the Indian killers and two hunters disappeared — their horses later identified in Indian hands. This “proved” to the settlers that the Indians were guilty, and began to fire upon them; but, the warriors escaped. Two independent parties set out in pursuit and in their confusion, one party mistook the other for the hostile Indians and the two parties fired on each other for a time. Terrorized South Pass residents who heard the firing sent word to nearby Fort Stambaugh of 300 rampaging Arapaho and Cheyenne warriors, requesting all available troops and a howitzer to repel them. In the meantime, the two “murdered” hunters rode safely into town on their own horses, having seen no Indians. Miraculously, no one was killed or wounded.

On July 24, 1873, Mrs. Hattie Hall and Mrs. L.S. Richardson were killed and their bodies mutilated at their homes on the Big Popo Agie River. As a band of Indians watched their homes from the nearby hills, they waited until the men had left the valley, moving into the mountains after timber. When they were gone, the warriors rushed down upon the women and killed them. Their homes were then plundered, with money and jewelry taken, and several heads of cattle were shot and killed.

Nearly 100 miles away at Rawlins Springs, four young Arapaho braves lost their lives in a brush with a Sheriff’s Posse. The Indians, who were allegedly out to raid the Ute Indians, were charged with shooting a white boy and stealing his horse. Capturing the four Indians, the Sheriff’s posse brought them in and the Arapaho denied the accusations. An investigating committee headed by Territorial Governor Campbell, after hearing both sides, declared the Indians guilty and they were executed. Later, the Board of Indian Commissioners wrote tersely of the “unjustifiable murder” of the four peaceable braves. It was never proven that the braves had committed any crime against the settlers.