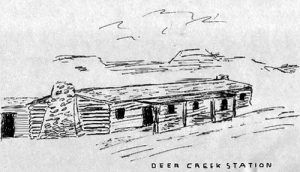 Deer Creek Station, Wyoming began as a Overland Mail and Pony Express station along the Oregon Trail that served as a vital supply point for thousands of emigrants as they traveled westward.

In May 1865 two companies of the Kansas Cavalry were garrisoned at Deer Creek Station, located just east of present-day Glenrock, Wyoming, to protect travelers from Indian attacks.

Two battles were fought in this vicinity on May 20, 1865. In the first battle, some 25 warriors came into conflict with Lieutenant W.B. Godfrey of Company D and three soldiers about three miles above the Deer Creek Station. After a brisk two-hour fight the men succeeded in repulsing their attackers, due to their superior weapons, without suffering casualties. However, two of the warriors were killed and another four wounded.

On the same day, another band of 50  warriors besieged the camp of a Seargent Smythe and six of his men. After two and a half hours the soldiers prevailed, once again due to their superior weapons. However, the warriors made off with about 26 cavalry horses. The Indians lost three warriors and five were wounded. One soldier was killed.

After the attacks, Lieutenant Colonel Preston B. Plumb, in command of the 11th Kansas Cavalry, directed Lieutenant Jacob Van Antwerp to take 24 men in pursuit of the Indian raiders. Though the troops were able to track them to about seven miles east of Deer Creek Station, where they found 100 warriors, the Indians were on the other side of the river, which was running too high to ford.

In August 1866, Indians burned the Deer Creek Station to the ground and it was never rebuilt.