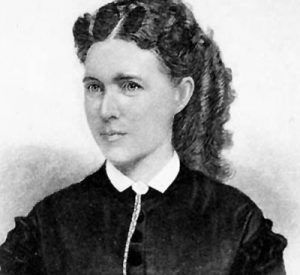 In May 1864 the Kelly family from eastern Kansas began the long trek to Montana. In this group were Josiah and Fanny Kelly, their niece, and adopted a 5-year old daughter, Mary Hurley; two black employees of the Kelly’s, one known only as Franklin and their hired driver, Andrew Sullivan; and a single man named Gardner Wakefield. Along the way, another Kansas couple, William and Sarah Larimer, with their 8-year old son, Frank joined them.

The small wagon train arrived at Fort Laramie, Wyoming in early July. After a short rest, the Kellys and the Larimers were ready to continue on to Montana and were assured by people at the fort that the road ahead was safe and that the Indians were friendly. A few more wagons joined them when they left the fort, which included the Reverend Sharp and a man named Noah Taylor.

Late on the afternoon of July 12, 1864, after the five wagons crossed Little Box Elder Creek, about four miles west of LaPrele Station, more than 200 Oglala Sioux swept in. Professing friendship, the Indians asked for food and supplies, and the emigrants fed them. They also expressed interest in Josiah’s best horse, which was given to them. However, after the meal, the warriors attacked with guns and arrows. Josiah Kelly, William Larimer, and Andrew Sullivan were wounded but escaped. The four other men, Noah Taylor, Reverend Sharp, Gardner Wakefield, and Kelly’s employee Franklin were killed. Fanny Kelly, Sarah Larimer, and the two children were captured, and the Indians looted the wagons and took the horses. 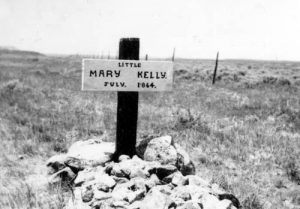 That night, Fanny Kelly encouraged her ward, Mary Hurley to escape, hoping that she might be rescued. Instead, Josiah would later find her body filled with arrows and scalped. The next night, Sarah Larimer and her son managed to steal away and made it to safety. Fanny Kelly would be forced to remain with the Indians until she was finally surrendered at Fort Sully, South Dakota in December. She was soon reunited with her husband and the pair returned to Kansas. The Larimers settled in Wyoming. Mary Hurley was buried where she was found. The other men who were killed were buried in a common grave some distance away. However, when that grave was threatened by a reservoir in 1954, the four other victims were moved to a new gravesite next to Mary’s. Mary’s grave and the massacre site are located about 14 miles west of Douglas, Wyoming.