Fort Laramie Skirmish (June 15, 1853) – During a gathering of Lakota Sioux and Cheyenne near Fort Laramie, Wyoming, who were waiting to receive their annual treaty goods, an argument occurred in which a Sioux warrior fired a shot at a soldier who was operating a ferry on the Platte River. Lieutenant Richard B. Garnett, who was in command at Fort Laramie responded by sending 23 men under Lieutenant to arrest the shooter.

In spite of the approximately 600 Sioux and Cheyenne lodges with over 1,000 warriors nearby, Fleming boldly demanded his prisoner. The discussion grew heated and the soldiers fired, killing three Indians, wounding three others, and taking two prisoners. Fleming was extremely lucky to retreat with no losses. Only great exertion on the part of the chiefs prevented a massive retaliation, as they correctly proclaimed that the soldiers had been “the first to make the ground bloody.”

Pass Creek Skirmish (February 20, 1863) – Ute Indians attacked a stage station, near the junction of Pass Creek and the North Platte River, driving off the stock and destroying equipment. In response, Lieutenant Henry Brandley, along with 20 soldiers rode out from Fort H.W. Halleck to find the raiders. Picking up their trail, the troops overtook the warriors, killing several of them. However, Lieutenant Brandly was wounded by a ball through the left arm. The skirmish site is near Walcott, Wyoming.

Sage Creek Station (June 8, 1865) – Just a few days after Lieutenant James A. Brown detached five men of the Ohio Cavalry to guard the Sage Creek Station on the Overland Road west of Fort Halleck, Wyoming, they were attacked by about 100 Lakota Sioux and Cheyenne warriors. After just about one hour of fighting, the troops found their ammunition low and were forced to evacuate with two civilians. Desperately outnumbered, the men faced an eight-mile run west to reach Pine Grove Station, with the Indians in pursuit. During the running battle, two soldiers and one of the civilians were killed, two soldiers were wounded, and another, who was wounded was captured. Only two of the soldiers made it to Pine Grove Station. The wounded and captured soldier and the second civilian were never found. The battle took place near Saratoga, Wyoming.

In the winter of 1876, five men from Lander were hunting and trapping on the Big Wind River and were attacked by Indians. Their bodies were not found until the following spring. Two of them — Thomas Cook and a man named Spencer, were killed near the mouth of Bridger Creek and their camp plundered. Three more men — James Lisight, B. C. Anderson and a man named Davis were killed on Lisight Creek about two miles from Bridger Creek and one of its tributaries. Their camp was also plundered. On January 13, 1877, a party of 14 hostile Indians ambushed a five-man detachment of the U.S. 3rd Cavalry in the vicinity of Elkhorn Creek, in Wyoming.

From January 20-22, 1877 the 3rd U.S. Cavalry clashed with hostile Indians in and around Bluff Station, Wyoming. Sergeant William B. Lewis was awarded the Congressional Medal of Honor for his bravery in the skirmish.

In the spring of 1877, a party of miners from Fort McKinney was attacked on the Dry Fork of the Bad Water River and two of them were killed. Barney Hill, of the party, was shot through five times and left for dead, but came to and by crawling most of the way, reached the Sweetwater River where he was found several days later by prospectors and was brought to J. M. Bied’s place on Willow Creek and from there, taken to the Post hospital where he fully recovered. He afterward committed suicide in Montana.

In April 1877, a band of about a dozen Arapaho braves stole 13 head of horses and mules from Lander and were followed by nine men some 70 miles to Muskrat, where they were overtaken and a sharp fight ensued. In the skirmish, John McCullom and Pap Conant were wounded and several horses were killed. It was thought two or three Indians were killed or several wounded. At one time, the Lander settlers got possession of all the horses, but during the fight, the Indians re-took them and then hard pressed the whites halfway back to Lander

In the Fall of 1877, a Northern Arapaho delegation visited Washington D.C. to request that the President of the United State not send them to the Indian Territory in Oklahoma. In 1878 the Arapaho were settled on the Wind River Reservation permanently. Their Southern Arapaho relatives were moved with the Southern Cheyenne to western Oklahoma, where their descendants remain today.

On September 1878, Northern Cheyenne, attempting to leave their prison reservation in Oklahoma to return to their lands in Montana, are pursued by U.S. troops and armed American civilians. The Indians would be hit by constant strikes during their return journey through Kansas, Nebraska, Dakota, and Wyoming until they were almost all lost. Very few who started the journey survive this tragic event of 1878-79. 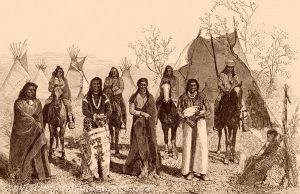 On September 12, 1878, fugitive Bannock Indians who had escaped from their reservation on September 4th, were caught by Lieutenant Hoel S. Bishop and a 30-man detachment of Company G, 5th Cavalry, and some Shoshone scouts. Finding them on a tributary of the Snake River near Jackson Hole, a fight broke out. One of the Indians was killed and the remaining seven were captured.

On April 29, 1882, at Fort Washakie, an Indian called “Ute Jack”, a White River Ute at the Shoshone Agency, was allegedly stirring up trouble. Lieutenant George H. Morgan took six men of Company K, 3rd Cavalry, to investigate. When Morgan went to arrest Ute Jack, he resisted, wielding a knife, and attempted to escape. The soldiers shot him in the arm, but, he ducked into a tipi and grabbed a carbine, then killed a sergeant of the detachment. When Major Julius W. Mason, of the 3rd Cavalry, arrived with more soldiers, Jack was finally captured and killed.

In the summer of 1882, some Northern Indians robbed the camps of A. S. Bruce and Andy Larson on Beaver Creek. They were followed by Bruce and others and over-taken on Big Popo Agie River below Lander. A sharp engagement followed in which two Indians were fatally wounded. This same party of warriors also came upon a Mexican by the name of Artecinario and a white man by the name of Lew Blanchard on the Bighorn River and killed them both.

This was the last known killing in this area.