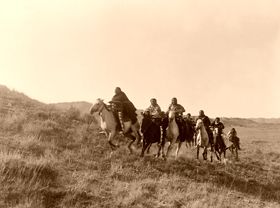 Early in the year 1868, the Indians showed a determination to keep up hostilities on the Wyoming plains.

The desire of the government to hold a big peace conference at Fort Laramie in April had been communicated to all the Indian tribes during the winter. The hostile bands had signified their willingness to come to the conference; however, they were in no hurry to do so, and events proved that they were not acting in good faith. A condensation of the records of the War Department for the month of March that year showed the real condition up to the time the peace commissioners arrived at Fort Laramie.

On March 12, 1868, a mail party from Fort Reno was attacked on the Dry Fork of the Cheyenne River. The next day, warriors captured a wagon train between Fort Fetterman and the Laramie Peak sawmill. On the 18th, the warriors captured 29 mules of the sawmill train and killed one man. The same day they also attacked the camp of a man named Brace near Box Elder and ran off 60 head of cattle. On the 24th of March, several ranches were burned and men were killed between Forts Laramie and Fetterman.

Yet another attack was made against four men who were herding stock on Lone Tree Creek, some 25 miles from Cheyenne. The men, including W.E. Talbott, George Spurr, a man named Morse, and a Mexican called Joe all survived but, Morse was hit and had an arm broken. Though word was quickly sent to Fort Russell and a detachment of soldiers sent after the Indians, they could not be found. 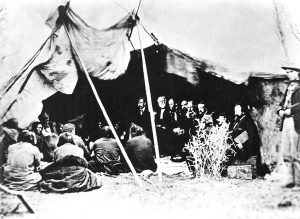 By all appearances, the Indians were not anxious to conclude a treaty of peace. However, the peace commission arrived at Fort Laramie on April 7, 1868, and proceeded at once to invite the Indians. The commissioners waited at Fort Laramie three months while a number of bands came in, signed the treaty, and received a supply of provisions, clothing, blankets, firearms, and ammunition. However, several chiefs including Red Cloud and Man-Afraid-of-His-Horses, while promising to come in, did not. Red Cloud waited for the withdrawal of the troops from the Bozeman Trail and did not sign the treaty until November 6, 1868. As soon as it was known among the Indians that Chief Red Cloud had agreed to make peace, 600 warriors withdrew from his camp in the Powder River country.

In the summer of 1869, those warriors who had withdrawn from Red Cloud’s group made several attacks. On August 22, 1869, a man named Edmond M. Pratt was killed about a mile and a half east of Cheyenne and 34 head of stock was stolen. B. J. Evert, Pratt’s companion, escaped and reached Cheyenne. Though a detachment of soldiers was sent out from Fort D.A. Russell to pursue the Indians, they were not found. 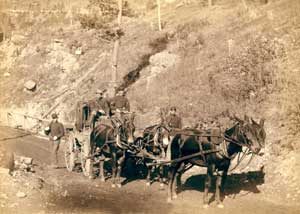 U.S. Paymaster and Guards on the Deadwood-Fort Meade Road in South Dakota by John C.H. Grabill, 1888

On July 28th, the warriors attacked a paymaster wagon traveling between Forts Reno and Fetterman. There were 60 soldiers in the escort, and in the first attack, two of them were killed. A sharp battle took place and the Indians were finally repulsed after a number of them had been killed. The paymaster and his escort passed on without further molestation.

Exactly one month later, on August 28, 1869, the warriors attacked a detachment from the band attacked Laycock’s camp of woodchoppers. The men fell back and opened fire on the Indians, killing one of them, before they fled. None of the woodchoppers were injured. On the same day, it was reported at Fort Sanders that three white men were killed on the Big Thompson River.

On September 15th, a band of Indians made an attack on a group encamped at Cooper Lake, killed one man, and captured two men and a woman. The hostiles went in the direction of Laramie Peak. The commanders at Forts Laramie and Fetterman were notified and detachments were sent out from both places to head them off, but, the Indians slipped through and went into the Sweetwater Country and escaped.

On the same day as the attack at Cooper Lake, Lieutenant J.H. Spencer, leading Company B, Fourth Infantry, was attacked by 300 Indians near Whiskey Gap, Wyoming. One soldier was captured and presumed dead.

On September 17th, a stagecoach is attacked and the driver killed at Point of Rocks, Wyoming.

On December 1, 1869, about two miles south present-day Glendo, Wyoming at Horseshoe Creek, about 150 Lakota Sioux attacked a mail stage heading from Fort Fetterman to Fort Laramie. Riding escort were ten soldiers under Sergeant Conrad Bahr. Though the warriors tried to overwhelm the escort, the soldiers fought back, hitting several attackers. Three soldiers were wounded, but the mail got through.

In 1869, the steel rails of the Union Pacific Railroad united the nation from the east coast to the west. Within no time, thousands of settlers flooded into Wyoming and the rest of the American West. With them, came hundreds of buffalo hunters, many drawn solely for the thrill of the kill. During a single summer, one party of 16 men killed 28,000 buffalo. This unregulated slaughter rapidly forced the Indians to depend on government rations, which was often slow in coming, if it came at all. With the railroad, also came more and more prospectors and others interested in the natural resources of the region, once again squeezing the Indian’s few remaining resources.

For many, these conditions were unacceptable and attacks continued, leading the military to build several new outposts of Fort Bridger. The first, Camp Auger, later called Camp Brown was established in June 1869 in present-day Lander, Wyoming. The following year, Fort Stambaugh would be established near South Pass City.