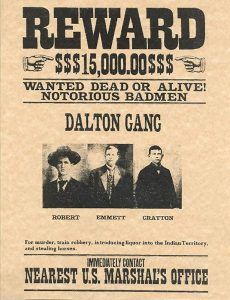 The Dalton Gang was a group of outlaws who robbed banks and trains in the Old West between 1890-1892.  They were also known as The Dalton Brothers because three of its members were brothers. The gang was crushed during an attempted bank robbery in Coffeyville, Kansas in 1892, when two of the brothers and two other gang members were killed. Only Emmett Dalton survived after he was captured. He was then tried, convicted, and spent 14 years in prison.

Though the Dalton brothers are best known for making their livings robbing trains and banks in Kansas and Oklahoma, this was not always the case, as one of them — Frank Dalton lived and died a heroic death as a lawman. During Frank’s tenure as a U.S. Deputy Marshal, he would often work with his brothers, aggressively pursuing outlaws in Kansas and in Indian Territory (Oklahoma). Unfortunately, Frank’s younger brothers would later become notorious outlaws, best known for their numerous robberies and being killed in the Coffeyville, Kansas raid.

The Dalton brothers were part of a large family headed by parents Adaline Younger Dalton and James Lewis Dalton. Lewis Dalton came west from Kentucky to Missouri during the late 1840s and in the 1850’s he was trading horses and running a saloon in Westport, Missouri (now Kansas City) when he married Adeline. Adeline’s brother was the father of Bob, Cole and James Younger.

Most of their 15 children were born in Missouri before the family migrated to Indian Territory in 1882.

In 1886, the family moved again to a place near Coffeyville, Kansas. In this rough and wild area, the Dalton brothers inherited a tradition of violence on the bloody ground of the Missouri-Kansas border, where Quantrill’s Raiders and other guerilla bands operated during and after the Civil War.

When the Oklahoma Territory opened for settlement in 1889, the family headed south again. However, Lewis died along the way leaving Adaline to raise the younger children alone. Adaline continued on, placing a claim on the banks of Kingfisher Creek in Indian Territory, where initially she and the family lived in a dugout. By this time the older Dalton brothers were on their own. 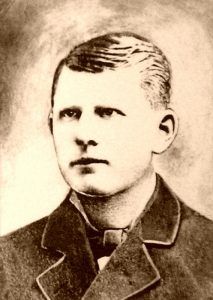 Frank Dalton (1859-1887) – The older brother of the infamous Daltons who would later form the Dalton Gang, Frank was always an upstanding citizen. Born in Missouri on June 8, 1859, he was commissioned as a U.S. Deputy Marshal at Fort Smith, Arkansas in 1882. During his short tenure as a Deputy Marshal, he was involved in a number of dangerous episodes and was described as “one of the most brave and efficient officers on the force.”  Frank even enlisted his brothers, Bob and Graton Dalton, who would later become the leading members of the Dalton Gang, to also become lawmen and work for him on several posses as he rounded up outlaws. His career and his life would end on November 27, 1887, when he and Deputy Marshal James R. Cole, went to the Cherokee Nation to arrest a man named Dave Smith on charges of horse theft and whiskey running.

Dalton made a fatal mistake when he expected no trouble from Smith and approached the camp where Dave Smith, his brother-in-law, Lee Dixon, Dixon’s wife, and a man named William Towerly were camped near the Arkansas River. The outlaws were not to be taken easily and as the two deputies approached the camp,  Smith immediately shot Dalton in the chest, driving the officer to the ground. Deputy Cole, reacting quickly, returned the fire, killing Dave Smith.

Though one of the outlaws then hit Cole in the side, the officer continued to fire, hitting both Dixon and his wife. Cole, believing that Frank was dead, escaped and made his way back to Fort Smith for assistance. However, Dalton was still alive and after Cole left the area, Will Towerly, a noted murderer and horse thief, approached Frank, who was conscious and begged Towerly not to shoot him as he was already mortally wounded. However, the outlaw blasted him in the head twice with his Winchester before he, too, made his escape. 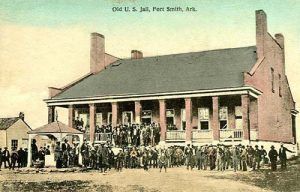 By the time Deputy Cole returned with a posse, Smith, Dalton, and a Dixon’s wife were already dead. Lee Dixon, though seriously wounded was alive and soon transported to Fort Smith, Arkansas where he died before he could stand trial.

Towerly’s escape was brief, as lawmen were quickly on his trail. Locating him near his home at Atoka, Choctaw Nation, he was shot and killed by a man named William Moody, who was assisting another deputy marshal in his arrest.

Frank Dalton was just 28 years old at the time of his death. He was buried in the Elmwood Cemetary in Coffeyville, Kansas, and is remembered by the U.S. Marshal’s service on their Roll Call of Honor. 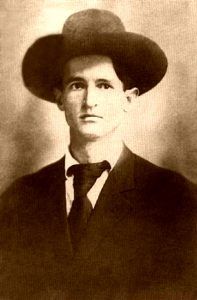 Robert “Bob” Reddick Dalton (1868-1892) – The very same Bob Dalton that was part of the Dalton Gang and killed at the Coffeeville, Kansas raid, was also a U.S. Deputy Marshal for a time. Born in 1868 in Missouri, Bob was one of fifteen children. The family moved to Indian Territory in 1882 and when Bob’s older brother Frank became a U.S. Deputy Marshal, Bob Dalton served on several of his posses. Some accounts say that he was with his brother, Frank, when he was killed by a gang of horse thieves in November 1887. Bob, himself was later commissioned in the Western District at Fort Smith, Arkansas and assigned to work out of the Wichita, Kansas Court. Bob Dalton also served as Chief of Police for the Osage Indian Nation when he worked out of the Kansas court.

On August 26, 1889, Bob was sent to Coffeyville, Kansas to arrest a man named Charley Montgomery, who was charged with peddling whiskey and stealing horses in Indian Territory.

However, when the outlaw resisted arrest and drew his guns, Montgomery died at the end of Dalton’s pistol. Bob did not receive any payment for Montgomery when he delivered him to Fort Smith because there was not a reward on his head for “Dead or Alive.”

Unfortunately, no one claimed the outlaw’s body, and was the custom of the time, Bob had to pay for his burial.

In April 1890, both Bob and Grattan Dalton were sent to Claremore, Oklahoma to arrest a man named Alex Cochran who had killed U.S. Deputy Marshal Cox. When they came upon a rider who fit the description of the fugitive, they began to follow him, who quickly tried to outdistance himself from the deputies. When the man would not stop, Bob shot both the horse and rider from a distance of some 300 years. Unfortunately, the dead man was not Alex Cochran, but his son.

Bob continued to work in the Osage Nation under the Wichita court for a time. However, rumors soon began to abound that he and Emmett were selling whiskey to the Indians and the Dalton brothers were involved in a noisy disturbance with the natives. When U.S. Commissioner Fitzpatrick received word of these events, he called in Bob Dalton,  demanded his badge and discharged him from service. An angry Bob insisted that he resigned claiming that court had cheated him out of several expenses.

In any event, in 1891, Bob, Grattan, and Emmett traveled to California, where they robbed a Southern Pacific Railroad of $60,000 and began a life of crime. With Bob as their leader, they soon formed the Dalton Gang, recruiting a number of outlaws, which included Dick Broadwell; George “Bitter Creek” Newcomb, Bill Power “Black-Faced” Charlie Bryant, and Bill Doolin. These tough characters, along with Bob, Grat, and Emmett then robbed banks and trains throughout Oklahoma for the next 18 months. However, the Dalton Gang came to an end in 1892, at Coffeyville, Kansas, when they attempted a double bank robbery in on October 5, 1892. Spotted by locals, a shootout followed the attempted robbery which claimed the lives of Grat and Bob Dalton, Dick Broadwell and Bill Power; as well as four Coffeyville residents. Emmett Dalton, though seriously wounded, was the only one to survive and wound up serving 14 years in prison.