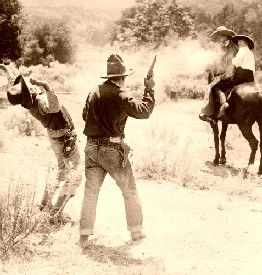 What’s true for Texas, in the record of desperadoism, is equally applicable to the country adjoining Texas upon the north, long known under the general title of the Indian Nations; although it is now rapidly being divided and allotted under the increasing demands of an ever-advancing civilization.

The great breeding ground of outlaws has ever been along the line of demarcation between the savage and the civilized. Here, in the Indian Territory, as though in a hotbed especially contrived, the desperado has flourished for generations. The Indians themselves retained much their old savage standards after they had been placed in this supposedly perpetual haven of refuge by the government. They have been followed, ever since the first movement of the tribes into these reservations, by numbers of unscrupulous whites such as hang on the outskirts of the settlements and rebel at the requirements of civilization.

Many white men of certain type married among the Indians, and the half-breed is reputed as a product inheriting the bad traits of both races and the good ones of neither a sweeping statement not always wholly true. Among these also was a large infusion of African-American blood, emanating from the slaves brought in by the Cherokee, and added to later by blacks moving in and marrying among the tribes.

These mixed-bloods seem to have been little disposed toward the ways of law and order. Moreover, the system of law was here, of course, altogether different from that of the States. The freedom from restraint, the exemption from the law, which always marked the border, here found their last abiding place. The Indians were not adherents to the white man’s creed, save as to the worst features, and they kept their own creed of blood.

No man will ever know how many murders have been committed in these fair and pleasant savannahs, among these rough hills or upon these rolling grassy plains from the time William Clark, the “Red Head Chief,” began the government work of settling the tribes in these lands, then supposed to be far beyond the possible demands of the white population of America.

Life could be lived here with small exertion. The easy gifts of the soil and the chase, coupled with the easy gifts of the government, unsettled the minds of all from those habits of steady industry and thrift which go with the observance of the law. If one coveted his neighbor’s possessions, the ready arbitrament of firearms told whose were the spoils. Human life has been cheap here for more than half a hundred years, and this condition has endured directly up to and into the days of white civilization. The writer remembers very well that in his hunting expeditions of twenty years ago it was always held dangerous to go into the Nations, and this was true whether parties went in across the Neutral Strip, or farther east among the Osage or the Creek Indians. The country below Coffeyville, Kansas was wild and remote as we saw it then, although now it is settling up, is traversed by railroads, and is slowly passing into the hands of white men in severalty, as fast as the blacks release their lands, or as fast as the government allows the Indians to give individual titles. In those days it was a matter of small concern if a traveler never returned from a journey among the timber-clad mountains, or the blackjack thickets along the rivers, and many were the murder committed thereabouts that never came to light.

In and around the Indian Nations there have also always been refugees from the upper frontier or from Texas or Arkansas. The country was long the natural haven of the lawless, as it has long been the designated home of a wild population. In this region, the creed has been much the same even after the wild ethics of the cowmen yielded to the scarcely more lawful methods of the land boomer.

Each man in the older days had his own notion of personal conduct, as each had his own opinions about the sacredness of property. It was natural that train robbing and bank looting should become recognized industries when the railroads and towns came into this fertile region, so long left sacred to the chase. The gangs of such men as the Cook boys, the Wickcliffe boys, or the Dalton boys, were natural and logical products of an environment. That this should be the more likely may be seen from the fact that for a decade or more preceding the great rushes of the land grabbers, the exploits of the James and Younger boys in train and bank robbing had filled all the country with the belief that the law could be defied successfully through a long term of years.

The Cook Boys acted upon this basis, until at length marshals shot them both, killed one and sent the remnants of the other to the penitentiary.

Since it would be impossible to go into any detailed mention of the scores and hundreds of desperadoes who have at different times been produced by the Nations, it may be sufficient to give a few of the salient features of the careers of the band which, as well as any, may be called typical of the Indian Nations brand of desperadoism the once-notorious Dalton boys.

The Dalton family lived in lower Kansas, near Coffeyville, which was situated almost directly upon the border of the Nations. They engaged in farming, and indeed two of the family were respectable farmers near Coffeyville within the last three or four years. The mother of the family still lives near Oklahoma City, where she secured a good claim at the time of the opening of the Oklahoma lands to white settlement. The father, Lewis Dalton, was a Kentucky man and served in the Mexican war. He later moved to Jackson County, Missouri, near the home of the notorious James and Younger boys, and in 1851 married Adelaide Younger, they removed some years later from Missouri to Kansas. Thirteen children were born to them, nine sons and four daughters. 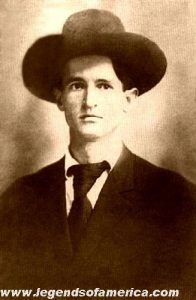 Charles, Henry, Littleton and Coleman Dalton were respected and quiet citizens. All the boys had nerve, and many of them reached office as U.S. Deputy Marshals. Franklin Dalton was killed while serving as U.S. Deputy Marshal near Fort Smith, Arkansas in 1887, his brother Bob being a member of the same posse at the time his fight was made with a band of horse thieves who resisted arrest. Grattan Dalton, after the death of his brother Franklin, was made a U.S. Deputy Marshal, after the curious but efficient Western fashion of setting dangerous men to work at catching dangerous men.

He and his posse in 1888 went after a bad Indian, who, in the melee, shot Grattan in the arm and escaped. Grattan later served as U.S. Deputy Marshal in Muskogee district, where the courts certainly needed men of stern courage as executives, for they had to deal with the most desperate and fearless class of criminals the world ever knew. Robert R. Dalton, better known as Bob Dalton, served on the posses of his brothers, and soon learned what it was to stand up and shoot while being shot at.

He turned out to be about the boldest of the family and was accepted as the clan leader later on in their exploits. He also was a U.S. Deputy Marshal at the dangerous stations of Fort Smith and Wichita, having much to do with the desperadoes of the Nations. He was chief of the Osage police for some time and saw an abundance of violent scenes. Emmett Dalton was also possessed of cool nerve and was soon known as a dangerous man to affront.

All the boys were good shots, but they seemed to have cared more for the Winchester than the six-shooter in their exploits, in which they were perhaps wise, for the rifle is of course far the surer when it is possible of use; and men mostly rode in that country with the rifle under their leg. Uncle Sam is obliged to take such material for his frontier peace officers as proves itself efficient in serving processes. A coward may be highly moral, but he will not do as a border deputy. The personal character of some of the most famous Western deputies would scarcely bear careful scrutiny, but the government at Washington is often obliged to wink at that sort of thing. There came a time when it remained difficult longer to wink at the methods of the Daltons as deputies. In one case they ran off with a big bunch of horses and sold them in a Kansas town. On account of this episode, Grattan, William, and Emmett Dalton made a hurried trip to California. Here they became restless, and went back to their old trade, thinking that no one on the Pacific Slope had any right to cause them fear. They held up a train in Tulare County and killed a fireman, but were repulsed. Later arrested and tried, William was cleared, but Grattan was sentenced to twenty years in the penitentiary. He escaped from jail before he got to the penitentiary, and rejoined Emmett at the old haunts in the Nations, Emmett having evaded arrest in California. The Southern Pacific railway had a standing offer of $6,000 for the robbers at the time they were killed.