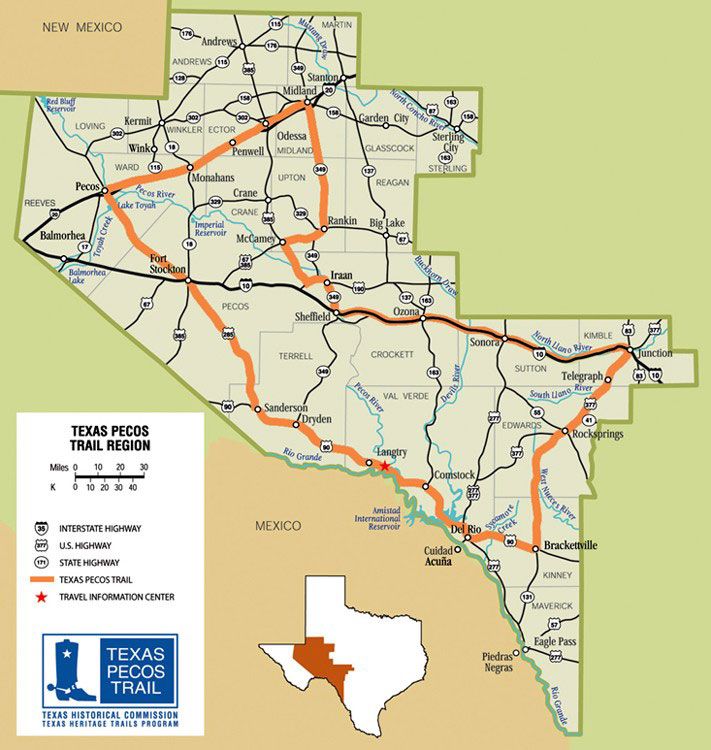 From the Texas Historical Commission

Trekking along the Pecos Trail provides visitors with a diverse landscape, including sand dunes, underground caverns, spring-fed pools, numerous rivers and creeks, lakes and much more. At some 1,356 miles in length, it will also take a little time to cover the region that encompasses 22 counties, seven state parks, dozens of towns, and hundreds of historical, cultural, natural, and recreational destinations.

McCamey to Iraan and Sheffield – 47.3 miles

In addition to the natural beauty that encourages a variety of outdoor adventures from river rafting to horseback riding, visitors also enjoy a number of museums, ancient pictographs, landmark churches, historic courthouse squares, and frontier forts.

The rich history of the area provides peeks into the heritage of cowboys, soldiers, Native Americans, Hispanic culture, the hardscrabble people of the Old West, and much more.

Though the vastness of this region cannot possibly be contained in one article, outlined below is summary information with links to more information, mileage, and photographs to whet your taste for the trail. Plan on a week to see the entire trail, or break it up into segments. Either way, you are sure to enjoy.

Beginning in Midland, Texas, the trail heads south to Sheffield, before heading eastward to Junction, and southwest to Brackettville, before turning back to the northwest. Passing through Del Rio, Langtry, and Fort Stockton, the path turns northeast again at Pecos, to complete a “circle” back to Midland.

Midland – Located in the heart of West Texas, Midland is a fast-growing city of about 110,000 people. The county seat of Midland County, it was originally founded as the midway point between Fort Worth and El Paso on the Texas and Pacific Railroad in 1881.

George W. Bush Childhood Home – Interpret the history of the Bush Family and the childhood of George W. Bush in Midland, Texas. It celebrates the lives of two presidents, two governors, and two first ladies.

Haley Memorial Library & History Center – The library and history center preserves western heritage by housing more than 25,000 books, manuscripts and other printed material documenting western history. The collections and programs concentrate on the common threads between the cowboy, the range cattle industry, military, and railroads.

Museum of the Southwest – Services the community as a regional resource for cultural enrichment. In its Art Museum, Children’s Museum, and Planetarium, the fosters appreciation of art and science and nurtures the spirit of creativity, sensitivity, and discovery.

Permian Basin Petroleum Museum – The Museum tells the story of petroleum and the rugged lives of men and women who sought a better life.

Sibley Nature Center – The center’s mission is to increase awareness of the natural and historical environment of the southern Llano Estacado through a broad range of interpretive programs and personal experience.

Nearby:  Several area ghost towns are situated near Midland including Spraberry, which is about 15 miles southeast of Midland, Midkiff, a semi-ghost town about 38 miles southwest of Midland; and Tarzan, which is located about 34 miles to the northeast

Rankin – Established in 1911, Rankin is the oldest town in Upton County and the county seat. Rankin is home to only about 800 people.

Nearby: Stiles ghost town, about 46 miles northeast of Rankin. 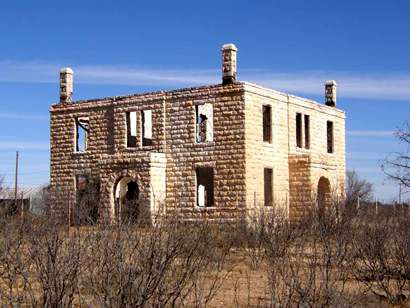 McCamey – Founded in 1925 when the McCamey Oil Field brought about the oil boom in the region. Its early years were colorful, filled with the typical boomtown problems of disorder and lawlessness associated with rapid growth. Today, it is known as the “Wind Energy Capital of Texas” because of the many wind farms that have been built in the area. It is called home to about 1,800 people.

Mendoza Trail Museum – Exhibits include relics of this recent frontier: Indian artifacts, fossils, mementos of the oil boom, and antique furniture. Also on museum grounds are the historic Adrian House, and a Santa Fe Railroad depot.

Nearby:  Dinosaur Tracks – 25 Miles West of McCamey, on Highway 67 behind Side Park