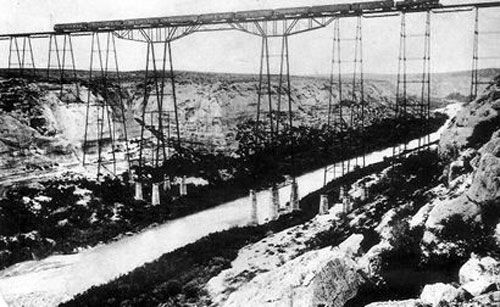 A few miles beyond the Pecos River Highway Bridge is a lookout that designates the old townsite of Vinegarroon and where the Pecos River Railroad bridge can be seen in the distance.

A major tributary of the Rio Grande, the Pecos River was long a barrier to transportation, particularly across the deep gorge that once marked its joining with the Rio Grande. Construction of the first railroad bridge over the Pecos River occurred in 1882 when the Galveston, Harrisburg, & San Antonio Railroad built its tracks through the area. Part of the transcontinental route of the Southern Pacific Railroad across the lower portion of the United States, it was the last major obstacle the railroads faced in completing the route linking New Orleans, Louisiana, and San Francisco, California. 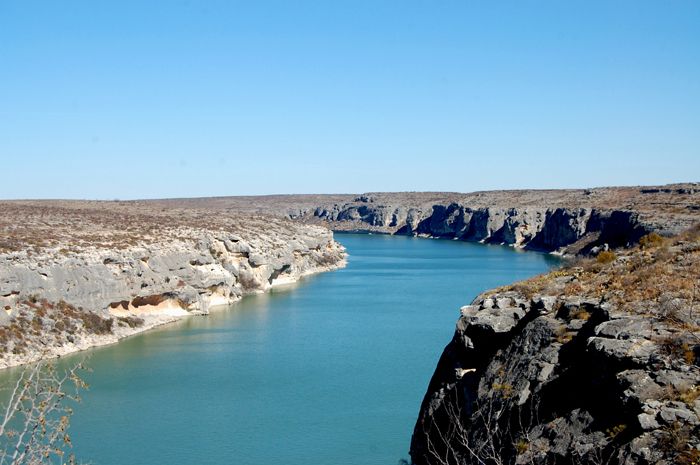 The Pecos River near Langtry, Texas, by Kathy Alexander.

As “Tunnel No. 2” was excavated on the west side of the canyon in 1881, a camp for the railroad workers was established near the site. It was named Vinegarroon for a whip scorpion that is common in the surrounding area and emits a vinegar-like odor when it is alarmed. The camp served as a temporary home for hundreds of railroad workers, most Chinese. For a brief time, Judge Roy Bean had a saloon and served as Justice of the Peace in the settlement.

During the bridge construction, a structure collapsed, and ten workers fell. Justice of the Peace, Judge Roy Bean, was called to the site to hold an inquest. Riding on a mule to the accident, he pronounced all ten men dead; however, only seven had been killed. When questioned on this point, the judge reasoned that the others would soon die and that he did not want to make the trip twice. Fortunately for the three men, he was wrong, and they survived to tell the tale.

Access to the first bridge, which was then deep in the canyon, utilizing a circuitous route and two tunnels. In 1892 the Texas and New Orleans Railroad Company, then operators of the Galveston, Harrisburg, & San Antonio Railroad, rebuilt the Pecos Loop tracks and constructed the Pecos High Bridge. 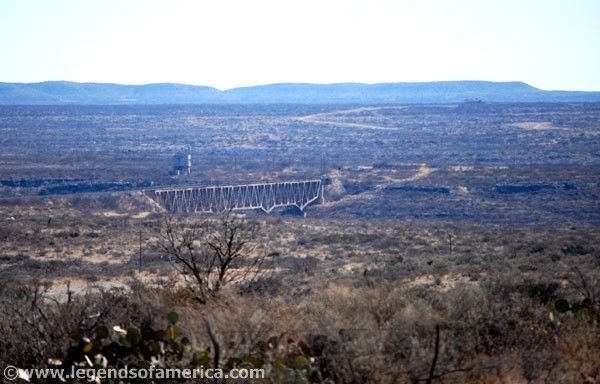 The “new” Pecos River Railroad Bridge, built in 1944, can be seen in the distance from the lookout off of I-90. Kathy Weiser-Alexander.

Work began in late 1891 and was completed within three months at the cost of more than $250,000. An engineering marvel, the bridge, known as the Pecos River Viaduct at the time, spanned 2,180 feet and towered 321 feet above the river. Supported by 24 towers, the bridge was the highest in North America and the third highest in the world at completion. Passenger trains slowed to six miles per hour before crossing it and stopped while on the bridge to afford travelers a view. Another legend tells that those gutsy local cowboys, perhaps emboldened by a bit of whiskey, occasionally rode across the walkway that adjoined the tracks on the high bridge, which had no guardrails.

Later, Vinegarroon was abandoned, and most residents moved to nearby Langtry. Nothing remains of old Vinegarroon today.

During the Mexican Revolution and World Wars I and II, the bridge was guarded by military units to protect the crucial transcontinental rail link. During World War II, the Pecos High Bridge became essential for transporting war materials. In response to heavier trains and the war demand, a new bridge was built in 1944, with special permission from the War Production Board to use “critical materials” in its construction. The old bridge was dismantled and sold as salvage in 1949.

The 1944 Pecos High Railroad Bridge remains in use, although the gorge is not as deep as it once was due to the rising of the river with the construction of Amistad Reservoir.

There is no access to the bridge or the old town site of Vinegarroon, as the site is on private property. However, there is a roadside park on US 90 about 12 miles south of Langtry, where the site can be seen from a distance.