Del Rio, Texas, the county seat of Val Verde County, has a history that goes back far beyond the establishment of the city. 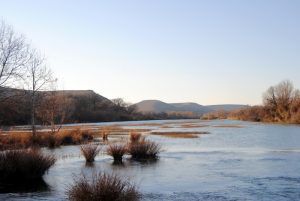 Thousands of years before Del Rio was established, the area was first settled by prehistoric Indians who lived in caves and rock shelters along the banks of the Rio Grande and Devils River, as early as 11,000 years ago. Later, when Spanish explorers came through the area, they described the Native Americans with a number of descriptions, but, were probably Jumano bands, who, by the 1700s, had mostly joined with Apache groups. The first Spanish exploration of the area occurred in 1690 when Gaspar Castano de Sosa crossed the Rio Grande near Del Rio on his way to establish settlements in what is New Mexico today.

The first non-Indian residents in the area were the Spanish, who established a small mission complex in 1736 near the site of present-day Ciudad Acuna, Del Rio’s Mexican sister city.

A few of these Spaniards settled on the north side of the Rio Grande, in what would later become Texas. However, the mission lasted only briefly. In 1808, another mission was established about three miles downstream on San Felipe Creek. It, too, was short-lived. 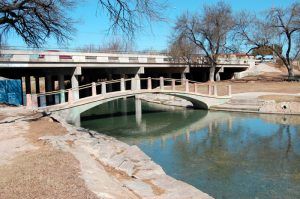 Although the region had good water, it would still be years before anyone permanently settled the area. In 1834, a small settlement was established on San Felipe Creek by James Grant and John Charles Beales, but, due to Indian attacks and drought, it was soon abandoned.

In February 1849, the Whiting and Smith expedition passed through the area surveying Texas’ new southwestern boundary. Soon, afterward, a temporary post called Camp Blake was established along the San Antonio-El Paso Road on the Devils River. This post, along with others, including Camp Hudson, 21 miles north of Comstock, was established to protect area settlers and travelers against Indian attacks.

By 1856-57, San Felipe Springs was situated at the crossroads of the 1,470 mile San Antonio-San Diego mail route and the Chihuahua Road used by wagons hauling silver and gold from Mexico to Indianola, the chief port on the Texas coast. 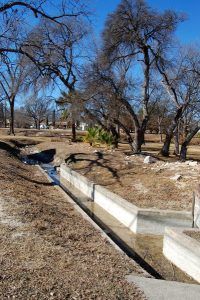 The irrigation canals can still be seen in numerous places in the older parts of the city, Kathy Weiser-Alexander.

After settlers came to the Del Rio area in 1864, the “Mother Ditch” and other irrigation canals were dug for irrigating vineyards, orchards, and gardens, and soon they established a small settlement called Las Sapas or El Salto. During this time, the settlement experienced little growth because many of those living in the area were transient, working their way to other more well-established communities.

During the Civil War, the military camps of the area were abandoned, leaving the frontier open to Indian attacks. When the war ended, Fort Clark in Brackettville was re-claimed in 1866 and from 1869 through 1882, Black Seminole Scouts, defended the Texas border west of Fort Clark against Indian attacks.

The community of San Felipe del Rio got its start in 1868 when the San Felipe Agricultural, Manufacturing, and Irrigation Company was organized. Purchasing thousands of acres of land around San Felipe Creek and constructing a network of irrigation canals, they promoted settlement by giving land as wages to its employees, as well as selling small tracts of land to newly arriving settlers. By 1871, the company had completed canals to 1,500 acres of land. The irrigation canals also provided water to the developing settlement. By 1875, the number of acres of land under irrigation had doubled. Some of the canals are still in operation today. 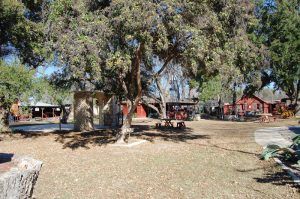 Residents in the area referred to the slowly developing townsite as San Felipe del Rio. According to local lore, the name came from early Spanish explorers who offered a Mass at the site of the nearby springs on St. Philip’s Day, 1635.

One of the earliest businesses was John Perry’s Mercantile, which was built in 1870. Said to have been the largest store between San Antonio and El Paso, it serves as part of the Whitehead Memorial Museum today. It is the oldest commercial structure in Del Rio today. More small businesses followed.

James H. Taylor, one of the original founders of the city, moved to the area in about 1870. He and his wife, Paula Losoya Taylor, built a one-story adobe house, which soon became the center of the community. The oldest home in Del Rio, it still stands today on the southwest corner of Pecan and Nicholson Streets. One of the owners of the San Felipe Agricultural, Manufacturing, and Irrigation Company, Taylor was also a merchant, cultivated much of his own acreage for crops, and owned a grist mill.

In 1874 the first school was built and Judge Kratz was the teacher, starting with just 15 students. He continued to teach through the 1870s. 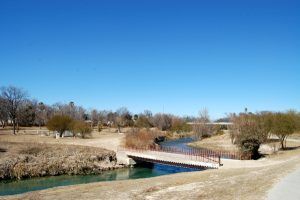 Situated on San Felipe Creek, the site of old Camp Del Rio is located near on the northeast corner of Dr. Fermin Calderon Blvd (U.S. 277) and De La Rosa Street, by Kathy Weiser-Alexander.

On September 6, 1876, Camp Del Rio was established on San Felipe Creek, on land provided by the San Felipe Agricultural, Manufacturing, and Irrigation Company. Originally known as Camp San Felipe, it was an outpost of Fort Clark, some 28 miles to the east. It was one of a chain of military fortifications built to defend the isolated settlements on the southwest frontier against Indians and Mexican bandits. The post included Officers’ Quarters, a hospital, bakery, storehouse, and warehouse. Indian raids in the area had ended by 1890 and the troops were moved to other posts. Camp Del Rio was officially abandoned the next year and the land was transferred back to its original owners. Today, there is nothing left of the post, but a historical marker. It was located near to the northeast corner of Dr. Fermin Calderon Blvd (U.S. 277) and De La Rosa Street. The historic marker is located near the amphitheater.

When Del Rio founder, James Taylor died in 1876, he left all his property to his wife Paula. She later would marry a man named Charles Rivers, but, he also died in 1879. She would go on to become a major benefactor for the city, donating the land to be utilized for Camp Del Rio, contributing land for area schools, and helping to build some of the town’s Catholic churches.

By the time that the railroads began to lay their tracks towards Del Rio in 1881, the town was called home to only about 200 people. Both the Southern Pacific Railroad, building west to east, and the Galveston, Harrisburg & San Antonio Railroad, building east to west, were working to make their way to Del Rio. The Galveston, Harrisburg & San Antonio Railroad bridged San Felipe Creek in June 1882 and when the first train arrived in Del Rio, the population began to boom.