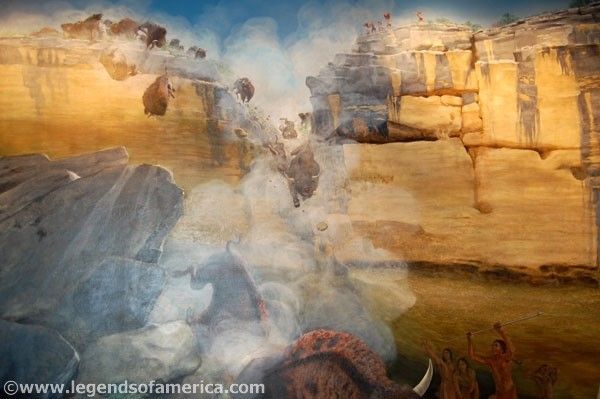 Bonfire Shelter was the scene of a series of prehistoric buffalo “jumps.” Long before Native Americans obtained horses, they stampeded herds of bison off the edge of this cliff near Langtry, Texas. This mural by Nola Davis is displayed in the Seminole Canyon State Park Museum, south of the buffalo jump site.

Bonfire Shelter is an archaeological site located in southwest Texas near Langtry, Texas. The site contains evidence of mass American bison hunts, a phenomenon that is usually associated with the Great Plains Indians hundreds of miles to the north.

This large rock shelter was the scene of several prehistoric bison jumps. More than 11,000 years ago, during the early Paleoindian era at the end of the last Ice Age, the people of the time began to stampede herds of buffalo over the edge of a cliff overhanging the shelter into a narrow box canyon that emptied into the Rio Grande. Bonfire Shelter is the southernmost buffalo kill site in North America and is also the oldest known site.

Situated in the deeply entrenched Mile Canyon south of I-90, and just northeast of Langtry, the cliff looms above a large rock shelter, hidden behind a massive roof fall. Near here, the buffalo plunged to their deaths on a rocky pile at the opening of the shelter, providing a sudden wealth of meat, hides, and bones to the hunters.

The site shows even earlier evidence of butchering large now-extinct game animals, such as elephant, mammoth, camel, horse, and extinct species of bison that dates back some 12,000-14,000 years ago. Archeological evidence shows that the kill site was used as recently as 800 B.C. 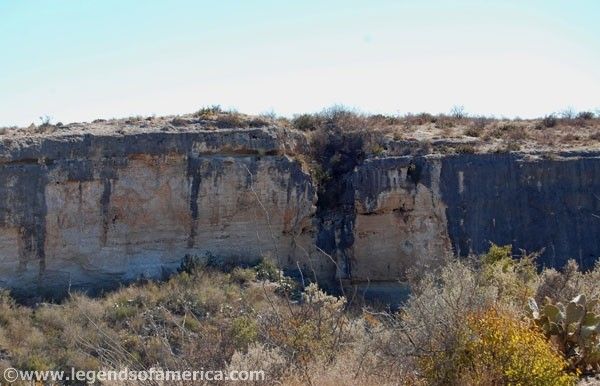 Bonfire Shelter was first archaeologically excavated in 1963–64 by the University of Texas at Austin during the extensive research that preceded the construction of the nearby Amistad Reservoir. Twenty years later, in 1983-1984, another group of archeologists from the University of Texas returned to further investigate deeply buried bonebed deposits. The archeologists found five separate layers of bone from various periods, the oldest of which date to over 14,100 years ago. The intermingling of the bones of so many species cut marks and breakage patterns on the bones, and the presence of large, anvil-like limestone blocks indicate that the site was long used as a butchering station. 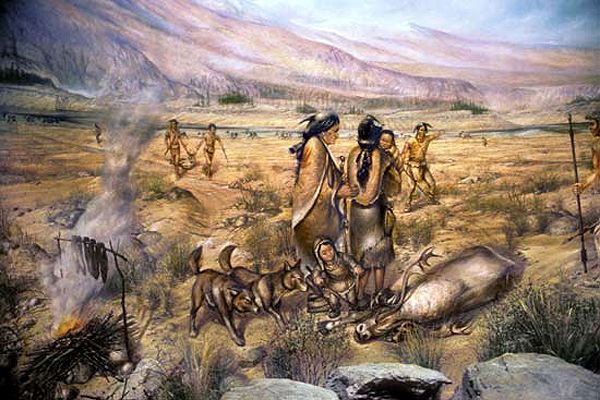 Stone tools, including Paleo-Indian arrowheads and radiocarbon dating of charcoal from small hearths, date to 10,000 years ago, when herds of the giant bison were driven over the cliff above. The most recent evidence shows that about 800 B.C., Late Archaic hunters succeeded, on at least one occasion, in driving as many as 800 buffalo off the same cliff. Killing far more than they could make use of, they left behind a rotting heap of partially butchered carcasses, that spontaneously combusted in an intense blaze that reduced most of the bones to ash. From this event, is where the shelter takes its name.

In the past, it was rare that the bison ranged this far south, as there was not enough grass cover for good grazing, and was too inhospitable to support large herds. The bone deposits at the shelter represent periods of climatic changes in the region when it was not as arid as it is today. Once the area returned to arid conditions, the bison (aka buffalo) retreated.

The canyon was added to the National Register of Historic Places in 1970. It encompasses some 1,500 acres entirely on private land and access is restricted.