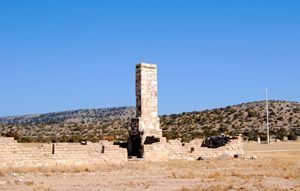 Fort Lancaster, Texas was established in 1855 on the east bank of live Oak Creek just above where it joins the Pecos River,

The fort was tasked to pursue and subdue the Comanche and Mescalero Apache Indians, as well as guarding the Pecos Crossing of the San Antonio-El Paso Road. The military post was first established as Camp Lancaster on August 20, 1855, when Companies H and K of the First Infantry Regiment, led by Captain Stephen D. Carpenter, arrived. It was designated as a permanent fort on August 21, 1856. One of the most isolated posts in Texas, Fort Lancaster’s only civilian activities were a sutler and a stage stop for mail.

Soldiers constructed the permanent buildings at Fort Lancaster with a combination of limestone blocks and adobe. At the height of development, it consisted of 25 permanent buildings and had an average complement of 72 men and four officers. When the Civil War erupted, federal troops abandoned the fort on March 19, 1861. During the war, it was occupied by 2nd Texas Cavalry and was an important location on the supply line to  Arizona and New Mexico in 1861-62. After the Civil War, the post was not re-commissioned, but, was frequently used as a sub-post for other Texas forts. In 1867, the post was utilized by the Buffalo Soldiers’ 9th Calvary assigned to Fort Stockton and in December, more than 100 soldiers and officers held off roughly 1,000 Kickapoo warriors with only three casualties.

It remained a stopping off place for travelers, attracted by the water supply. Later, it was sold to private individuals. In 1965, the owners donated the 39-acre site to Crockett County for preservation as a historic site. Today, there are extensive stone ruins of the fort, including partial stone walls, some rising 6 to 8 feet; chimneys and fireplaces; and piles of rubble. The old fort site is located in Crockett County, just off U.S. 290, about 10 miles east of Sheffield.