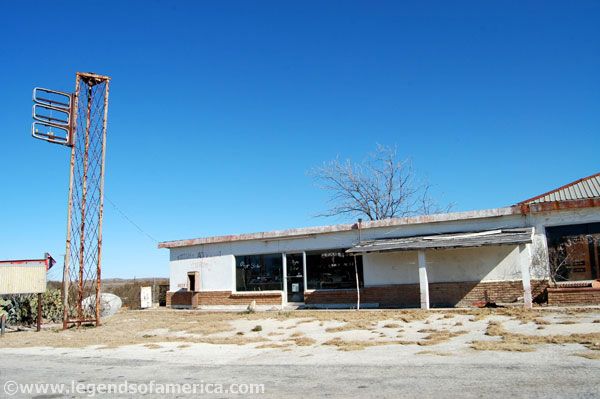 Just about 29 miles northwest of Del Rio, Comstock, Texas, like many other small towns in the area, got its start when the Galveston, Harrisburg, & San Antonio Railroad came through the area in 1882. When the town was first platted, it was called Sotol (or Soto) City but was soon changed to Comstock, after a railroad dispatcher named John B. Comstock.

The original townsite was built just east of the current location but was later moved to use water from a nearby natural lake. Today, the water supply of the lake is only intermittent.

In 1888 a post office was established, and a man named George Washington Ames opened the Ames General Store, which sold groceries, lumber, salt, livestock feed, and ranch supplies. From 1888 until 1910, the Deaton Stage Line, which delivered mail and hauled freight, operated a six-horse stagecoach that changed teams four times between Comstock and Ozona, some 80 miles to the north. In 1889 the Phillips Hotel began to serve travelers stopping overnight in Comstock, and the following year, the D.C. Denny Lumber Yard was established. Later, it would be converted into Uncle Denny’s Saloon and Billiard Hall.

In the late 1890s, Comstock became known as a lawless place when a minor outlaw named Bud Newman was living in the area. In December 1895, Newman, who was working in the stock business, killed a man named Shepard Baker in a shoot-out near Kelly’s Saloon.

The pair had been feuding for some time, and while Baker was sitting in a wagon, Newman came by, and Baker took a shot at him. Newman shot back and killed the other man. Newman was acquitted, and Baker was buried in the Comstock graveyard.

A year later, a westbound passenger train was robbed about midnight on December 20, 1896, near Cow Creek less than a mile west of Comstock. Four outlaws tied up the train crew and tried to open a large trans-continental safe with a timer lock. However, they could not open it and only made off with about $70 from a smaller safe.

A local posse was formed by the County Sheriff, which quickly pursued the bandits. The next day, they were joined by several Texas Rangers. By December 27, they had arrested Bud Newman, and three other men named Frank Gobble, Alex Purviance, and Rollie Shackleford. Purviance and Shackleford each received five years in prison. The results of Frank Gobble’s trial are unknown. But, the lucky Bud Newman was acquitted once again.

Two years later, he and three other men, including Pierce Keaton and brothers Bill and Jeff Taylor, attempted to rob another train on June 9, 1898, about four miles west of Santa Anna, Texas. However, this time, a gunfight erupted in which railroad fireman Lee Johnson was killed, Newman was shot in the arm, and a Keaton took a shot in the right leg. Fleeing the scene, the outlaws were pursued and quickly apprehended. Used to getting off Scot-free, Newman agreed to testify for the state. However, Bill Taylor managed to escape. In August 1900, he tracked Newman down and killed him. 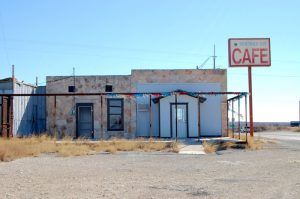 By 1901, a public school had been established in Comstock with one teacher and about 89 students. Though growth was steady over the next several decades, it was slow. In 1914, the Deaton Stage Line ended its service to Comstock due to the advent of the automobile, and the depot was soon closed as well.

Slow growth has been seen since that time, with a population in 2010 of about 475 people. 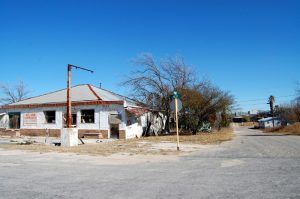 An abandoned gas station in Comstock, Texas by Kathy Weiser-Alexander.