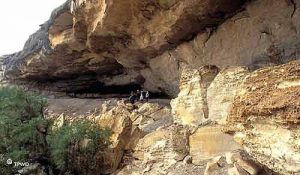 About ten miles northwest of Comstock is Seminole Canyon State Park. Sitting on more than 2,000 acres, the historic site displays jagged canyons cut through the Chihuahuan Desert, where the Pecos River flows into the Rio Grande.

Humans have inhabited the area for some 12,000 years, who lived in natural rock shelters carved into the canyon walls. In those early days, now-extinct species of elephant, camel, mammoth, bison, and horse roamed the landscape, and the people thrived on hunting big game. During the Pleistocene ice age (10,000-12,000 years ago), the climate was more moderate, and the terrain was covered with lush vegetation, such as pine, juniper, and oak woodlands in the canyons and luxuriant grasslands on the uplands.

Some 5,000 years later, the region underwent a dramatic climate change that produced an arid landscape much like today. This culture survived more on hunting small animals and gathering wild plants. This culture, called the “Archaic people,” lived in the dry rock shelters that line the canyon walls; but in smaller groups than previous inhabitants since the land would not support larger groups for long periods. 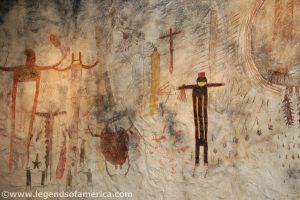 These people left their mark on the environment through some 200 rock paintings throughout the area. The park contains some of the most outstanding examples not only in Pecos River Style, attributed to the Middle Archaic period of 4,000 years ago, adorn rock shelters throughout its canyons. Research into the meaning of Lower Pecos River Style murals suggests that the images may communicate important elements of the culture’s belief system, such as shamanic journeys to the land of the dead and symbolic relationships with animals and peyote a hallucinogenic cactus. The pictographs, ranging from single paintings to large panels hundreds of feet long, can be found in several Lower Pecos River Country locations.

The first known European in this area was Spanish Explorer and colonist Gaspar Castano de Sosa. They set out from Monclova,  Mexico, in 1590, en route to New Mexico to establish a new colony. The U. S. Army was the first American presence in the Lower Pecos region. In 1851, Lieutenant Nathaniel Michler did a reconnaissance of the Rio Grande above and below its junction with the Pecos River for the United States and Mexico Boundary Commission.

After the Civil War, Lieutenant John L. Bullis and his Black Seminole Scouts operated in the area. They blasted a wagon road into the Pecos Canyon near the Rio Grande to provide the military with a shorter route between Forts Clark and Davis. The canyon is named in honor of these scouts. 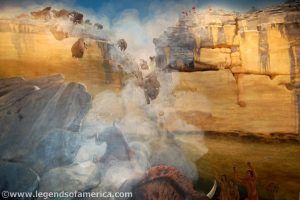 Bonfire Shelter was the scene of a series of prehistoric buffalo “jumps.” Long before Native Americans obtained horses, they stampeded herds of bison of the edge of this cliff near Langtry, Texas. This mural by Nola Davis is displayed in the Seminole Canyon
State Park Museum, south of the buffalo jump site.

In 1882, the construction of the Southern Pacific Railroad reached the present park location. The route to connect El Paso with San Antonio was begun after the merger of the Galveston, Harrisburg, & San Antonio Railroad with the Southern Pacific. The railroad section in the Rio Grande canyon was finally abandoned in 1892 when a new bridge spanning the entire breadth of the Pecos River Canyon was completed. The present bridge was built at the same site during World War II. Sections of the old railroad bed still line the park’s landscape.

The historic pictographs can be seen only on guided tours of the Fate Bell Shelter, one of the oldest cave dwellings in North America and contains some of North America’s oldest Indian pictographs. The tour involves a fairly-rugged hike to the bottom of the canyon and then up to the shelter. Outside of the tours, no hiking is allowed in the canyon area.

The park also includes an interpretive center, with exhibits relating to the history of the canyon area, campsites, and hiking and biking trails.