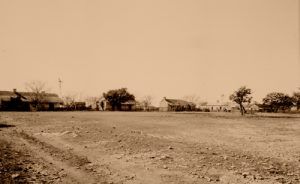 Before Fort McKavett, Texas was established, a civilian community had already grown up about a mile north of where the post would be built. The settlement was supposed to be named Lehnesburg, in honor of a German merchant, but, instead was called Scabtown.

When the troops arrived in 1852 to establish the post, it was first called Camp San Saba because it overlooks the headwaters of the San Saba River Valley. It was established by five companies of the Eighth Infantry in March 1852 to protect frontier settlers and travelers on upper San Antonio-El Paso Road.

Its location atop a hilltop provided a strategic advantage as it provided distant views in all directions. Nearby springs provided a dependable source of drinking water and game was abundant in the area.

Wooded with pecan and oak trees, these were cut and stones quarried on the post to construct the buildings. Additional supplies, materials, and livestock were moved to the fort from San Antonio.

Shortly after the fort was established, it was renamed Fort McKavett, in honor of Captain Henry McKavett, who was killed in the Battle of Monterey during the Mexican-American War. The fort was garrisoned with 350-500 troops, about half of which were infantry, the rest from cavalry companies, and officers that served in the regimental headquarters. When the post was complete, General William T. Sherman would describe it as “the prettiest post in Texas.”

The fort served as a supply base for western Texas, a location for testing new weapons and equipment, in addition to protecting the upper San Antonio-El Paso Road. Though the troops were involved in a few small skirmishes, in the posts’ early years, for most of the time, life was rather routine, with the troops escorting travelers,  maintaining the post, patrolling the area, and loading supplies to be sent to other posts. After several years, the fort was abandoned in March 1859, and the soldiers transferred to other locations. 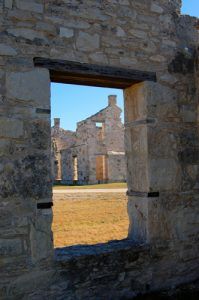 Having no one to protect them from Indian raids, most of the civilians left nearby Scabtown when the soldiers departed.

After the Civil War, the fort was re-garrisoned to fight in the Indian Wars in April 1868, and nearby “Scabtown,” also grew again, though this time, it took on the name of the fort. During the next several years, the soldiers were engaged in several skirmishes and major Indian campaigns including Colonel Ranald Mackenzie’s and William Shafter’s raids into Mexico, and at the Battle of Palo Duro Canyon during the Red River War in 1874. However, after almost a decade, the “Indian menace,” was over and the fort was abandoned for the last time on June 30, 1883.

This time, with the Indian threat gone, the civilians in the town of Fort McKavett stayed on, some of whom occupied the Fort McKavett buildings. By the mid-1890s the community had about 80 people, a weekly newspaper, two hotels, three churches, and a broom and mattress factory. In 1904, the school boasted 28 students.

By the 1920s, the town of Fort McKavett sported a  population of about 150 but fell during the Great Depression. The number continued to fall and by 1990, the town was called home to only about 45 people. Today, there are only a smattering of ranchers in the area, but amazingly, a post office remains open.

Numerous buildings remain at the site, some of which have been rebuilt or restored, and others in ruins. The old post-hospital now serves as the visitors’ center and museum; several Officers’ Quarters buildings still stand, as well as the church, headquarters, morgue, and several others. More structures have crumbled including some of the barracks and the bakery. Nearby is the Fort McKavett Cemetery, which was established in 1849 and still used today. Most, but not all, of the soldiers buried at the cemetery were moved to other military cemeteries when the fort closed.

Two interesting graves that remain are that of William McDougall, who was killed in an Indian Raid on the post on August 6, 1866, and John W. Vaden, who was shot in cold blood by the gunfighter, Ben Daniels, on October 7, 1886. 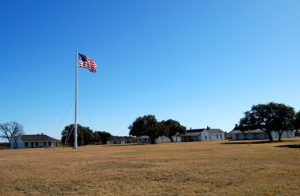 Fort McKavett is located at the intersection of Farm Roads 864 and 1674, twenty miles southwest of Menard, Texas.