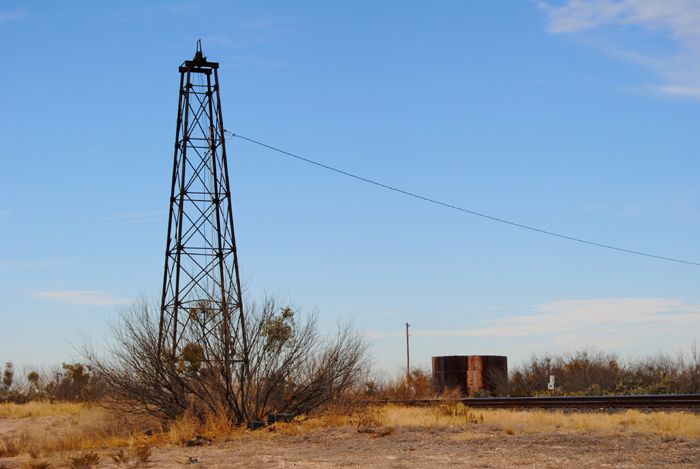 Water pump and tank in Pumpville, Texas by Kathy Weiser-Alexander.

Pumpville, Texas, is a ghost town located between Langtry and Dryden in Val Verde County.

This small town was born when the Southern Pacific Railroad came through the area in 1882. At this time, steam locomotives required water to operate, and the site became a stop along the line. The station was first called Samuels. Wells were drilled, and water was found at 600 feet. To utilize the water for the steam engines, a pump house was built to filter the hard water before it was used on the trains. When the steam engines came through, the railroad crew swung the gooseneck arm on a water column over the locomotive tender and opened the valve to let the water flow into the reservoir in the car.

Southern Pacific also built a depot; a salt shed, housing for the foreman and maintenance men, a water tank, tool shed, telegraph office, and a home for the telegrapher. The railroad siding quickly became a shipping point for goat and sheep ranchers in western Val Verde and eastern Terrell Counties. Livestock pens and loading chutes were built and managed by Ernest P. Bradford, who also supervised the loading of cattle cars. 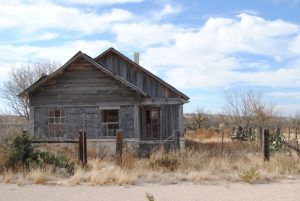 An old house near Pumpville, Texas, by Kathy Weiser-Alexander.

Though the community was mostly quiet in its early years, the railroad was held up twice. The first time was in 1897 when Black Jack Ketchum robbed the train of $6,000 just west of town. Ketchum was later caught and hanged in Clayton, New Mexico, in 1901. Two years later, in August 1889, a westbound passenger train was robbed again by three bandits that were Big Bend residents. When Texas Rangers tried to take the robbers into custody, one was killed, and the remaining two were tried and convicted.

As early as 1899, James N. Morgan established a post office, probably in his home. Because there was already a town named Samuels in Texas, the community was renamed Pumpville.

As the community grew, some of the area ranchers and their employees moved to town rather than live on their isolated ranches, and several dwellings were built along the main street that ran parallel with the tracks. 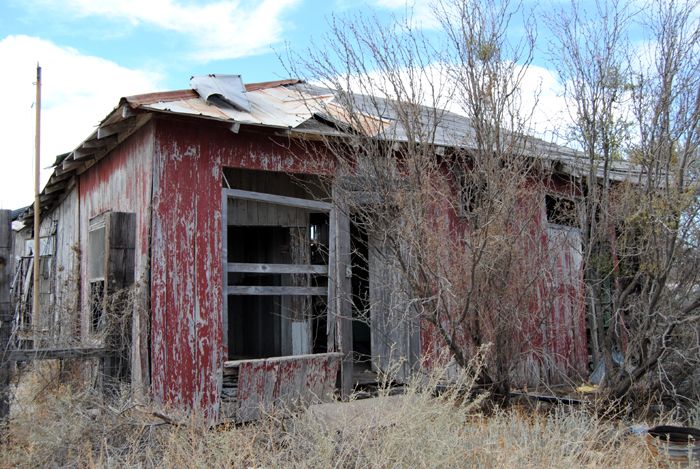 The old general store in Pumpville, Texas by Kathy Weiser-Alexander.

Sometime later, Ernest P. Bradford opened a store that provided groceries, livestock feed, and other supplies to the nearby ranchers. The store would also add gas pumps, a telephone switchboard, and the post office was moved there. 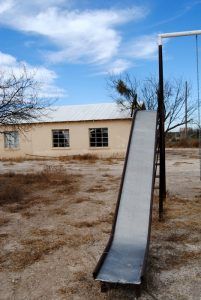 An old slide in front of the school in Pumpville, Texas by Kathy Weiser-Alexander.

At some point, the first schoolhouse was built out of railroad ties bought by the railroad employees. It was located on the north side of the tracks. Later a new school and a teacher’s house were built on the south side, which is probably the same one that continues to stand today. In addition to serving the students, the school also offered athletic competitions and dances attended by students from miles around.

The Pumpville Baptist Church was founded in 1930, and a building was constructed on land donated by Earnest P. Bradford. A new church and parsonage were built in 1947 and dedicated in 1948.

Pumpville declined after World War II when the Southern Pacific gradually withdrew its employees from the town. In 1952, the depot closed, and the water service was abandoned in 1955 when diesel locomotives completely replaced steam engines. Afterward, the town began to die, and nearly all of the railroad facilities were dismantled and removed. The Pumpville school was closed in 1957, and students were bussed to Langtry about 15 miles to the east. Within a short time, most of the people moved away, leaving only one family. 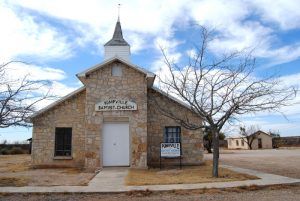 Baptist Church, with the school in the background, in Pumpville, Texas by Kathy Weiser-Alexander.

But, there would be one last event to make the news in 1965 when Alfredo Hernandez, the notorious “caveman bandit,” shot the postmaster, Pelham Bradford, 67, in the leg during a nighttime robbery. Hernandez was later wounded and captured in nearby Dryden.

The same year, the Pumpville Mercantile closed, and the Baptist church stopped holding services in 1970. Pumpville was then a total ghost town.

After 15 years, however, the Reverend Paul Ray of Sanderson heeded the pleas of area ranchers and others to reopen the church in 1985. It was cleaned up, painted, and services began again. Services are still held today by visiting pastors and worshippers who come from as far as 50 miles away. Afterward, they join together for a potluck lunch and games.

Besides the church, the school and a few houses stand in Pumpville, along with a scattering of falling buildings, sheds, and barns.

Pumpville is located at the northern end of Farm to Market Road 1865, about 2.2 miles north of U.S. Highway 90, approximately 13.6 miles northwest of Langtry. 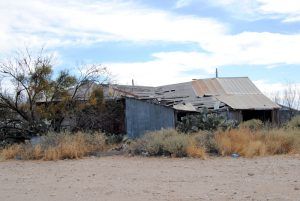 A falling down building in Pumpville, Texas by Kathy Weiser-Alexander.