Jackson (December 19, 1862) – After the Battle of Lexington, General Forrest continued his advance the next day, while Union General Sullivan ordered Colonel Adolph Engelmann to take a small force northeast of Jackson. At Old Salem Cemetery, acting on the defensive, Engelmann’s two infantry regiments repulsed a Confederate mounted attack and withdrew a mile closer to town. To Forrest, the fight amounted to no more than a ploy and show of force intended to hold Jackson’s Union defenders in place while two mounted columns destroyed railroad tracks north and south of the town and returned. This accomplished, Forrest withdrew from the Jackson area to attack Trenton, Tennessee. Thus, although the Federals had checked a demonstration by a portion of Forrest’s force, a major accomplishment, other Confederates had fulfilled an element of the expedition’s mission. Resulting in a Confederate victory, casualties of the Union were about six, and Confederates are unknown.

Trenton (December 20, 1862) – After the Battle of Jackson, General Nathan B. Forrest led his troops to Trenton, Tennessee, to take the Mobile and Ohio Railroad Depot. After putting up a brief fight in the depot area, Union defenders surrendered rather than face destruction by Forrest’s artillery. The Confederates then ransacked the courthouse and destroyed military supplies in the town. The Confederates took about 700 Union prisoners.

Parker’s Cross Roads (December 31, 1862) – As Brigadier General Nathan B. Forrest’s expedition into West Tennessee neared its conclusion, Union Brigadier General Jeremiah C. Sullivan, with the brigades of Colonel Cyrus L. Dunham and Colonel John W. Fuller, attempted to cut Forrest off from withdrawing across the Tennessee River. Dunham’s and Forrest’s march routes, on December 31, 1862, brought them into contact at Parker’s Cross Roads in present-day Henderson County. Skirmishing began about 9:00 am, with Forrest taking an initial position along a wooded ridge northwest of Dunham at the intersection. Confederate artillery gained an early advantage. Dunham pulled his brigade back a half-mile and redeployed. His Federal troops repelled frontal feints until attacked on both flanks and rear by Forrest’s mounted and dismounted troops. During a lull, Forrest sent Dunham a demand for unconditional surrender. Dunham refused and prepared for Forrest’s next onset when Fuller’s Union brigade arrived from the north and surprised the Confederates with an attack on their rear. Confederate security detachments had failed to warn of Fuller’s approach. “Charge ’em both ways,” ordered Forrest. The Confederates briefly reversed front, repelled Fuller, then rushed past Dunham’s demoralized force and withdrew south to Lexington and then across the Tennessee River. Both sides claimed victory, but the Confederate claims appear to have more credence. Estimated casualties were 237 Union and 500 Confederate.

After his victory at Stones River, Major General William Rosecrans occupied Murfreesboro, Tennessee, for almost six months while Confederate General Braxton Bragg rested in Tullahoma, Tennessee establishing a long defensive line was intended to block Union advances against the strategic city of Chattanooga in his rear. In April, Union cavalry under Colonel Abel Streight moved against the railroad that supplied Bragg’s army in Middle Tennessee, hoping it would cause them to withdraw to Georgia. 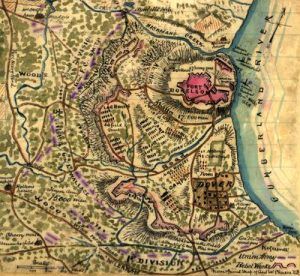 The Federals, however, apprised of Wheeler’s intent, refrained from sending any boats up or downriver. Unable to disrupt Union shipping and realize that he and his men could not remain in the area indefinitely, Wheeler decided to attack the garrison at Dover, Tennessee, which informers reported was small and could easily be overwhelmed. The Rebels set out for Dover and, between 1:00 and 2:00 pm, on February 3rd and began an attack.

The 800-man garrison, under the command of Colonel A.C. Harding, was in and about the town of Dover where they had chosen camps that commanded the area and had dug rifle pits and battery emplacements. The Confederates mounted a determined attack using artillery fire with great skill but were repulsed with heavy losses. By dusk, both sides were mostly without ammunition. The Confederates surveyed the Union defenses and decided that the enemy was too well-placed to capture, and Wheeler’s force retired. The Federals sent out a pursuit but to no avail. The Confederates had failed to disrupt shipping on the Cumberland River and capture the garrison at Dover. This Confederate failure left the Union in control in Middle Tennessee, and a bitter Brigadier General Nathan B. Forrest denounced Wheeler, a favorite of General Braxton Bragg, saying he would not again serve under him. Estimated casualties of the skirmish were 125 Union and 670 Confederate.

Thompson’s Station (March 5, 1863) – In a period of relative inactivity following the Battle of Stones River, a reinforced Union infantry brigade, under Colonel John Coburn, left Franklin to reconnoiter south toward Columbia. Four miles from Spring Hill, in Williamson County, Coburn attacked with his right-wing, a Confederate force composed of two regiments but was repelled. Then, Confederate Major General Van Dorn seized the initiative. Brigadier General W.H. “Red” Jackson’s dismounted 2nd Division made a frontal attack, while Brigadier General Nathan B. Forrest’s division swept around Coburn’s left flank into his rear. After three attempts, characterized by hard fighting, Jackson carried the Union hilltop position as Forrest captured Coburn’s wagon train and blocked the road to Columbia in his rear. Out of ammunition and surrounded, Coburn surrendered. Union influence in Middle Tennessee subsided for a while. The Confederate victory generated 1,906 Union casualties and 300 Confederate.

Vaught’s Hill (March 20, 1863) – Also called the Battle of Milton, this skirmish took place in Rutherford County, Tennessee. During the inactivity following the Battle of Stones River, a Union brigade-sized reconnaissance force, under Colonel Albert S. Hall, left Murfreesboro on March 18. Circling to the northeast, Hall encountered Confederate Brigadier General John Hunt Morgan’s cavalry command, which caused him to fall back to Milton’s position east. Pursuing Hall, Morgan’s men caught up with him on the morning of the 20th, at Vaught’s Hill. Dismounted, Morgan struck at both Union flanks, even to the point of encircling Hall’s hilltop position. Hall conducted a perimeter defense and withstood all Confederate attacks, which lasted till after 2:00 pm. Morgan continued to bombard the Yankees until 4:30 pm when he broke off the engagement after learning that Union reinforcements were en route from Murfreesboro. Continuing to strengthen their position in Middle Tennessee, the Union victory resulted in about 62 Union casualties and 373 Confederate casualties.