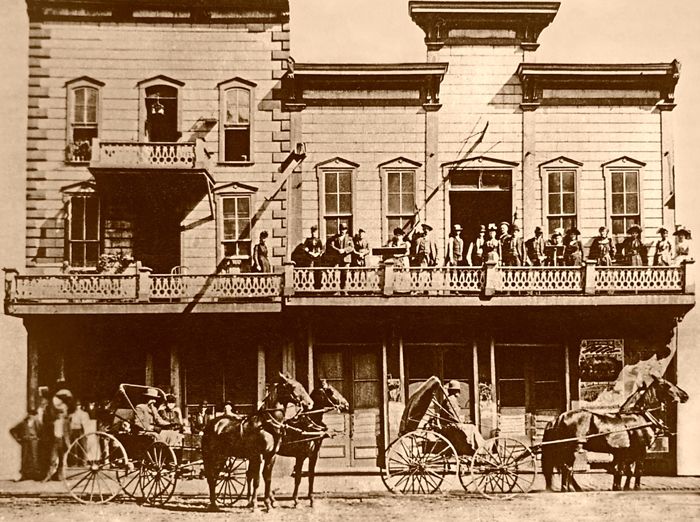 Ellis Albert “Al” Swearingen and his twin brother Lemuel were born in Oskaloosa, Iowa, on July 8, 1845, to Daniel J. and Keziah Montgomery Swearingen. The twins were the oldest of eight children and lived in Iowa until they were adults. 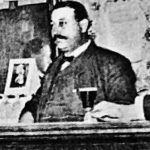 Al, as he was known, arrived in Deadwood, South Dakota, in May 1876 as one of the earliest non-mining men in the area. By the end of the week, he had a temporary dance hall up and running. Arriving with his wife Nettie, she soon left him in September and later divorced him, claiming spousal abuse. Swearingen would marry two more times while in Deadwood. Both marriages resulted in divorces with similar abuse claims.

Swearingen replaced his temporary dance hall with a permanent building called the Cricket Saloon, a tiny tavern that the newspapers referred to as a “hall” due to its narrowness. Swearingen offered “prize fights” in a 5’x5′ space for entertainment, though no prizes existed. The non-professionals who engaged in the matches were generally ordinary working miners who Swearingen persuaded to participate.

On April 7, 1877, Swearingen opened the Gem Variety Theater that was described in the Black Hills Daily Pioneer as being “neat and tastefully arranged as any place of its kind in the west.” The Gem Theater soon provided the entertainment-starved camp with comedians, singers, and dancers, as well as continuing its display of “prize fights.” However, the theater was mainly a masquerade for its primary purpose as a brothel, which soon gained a reputation for debasing the women who were pressed into service there. 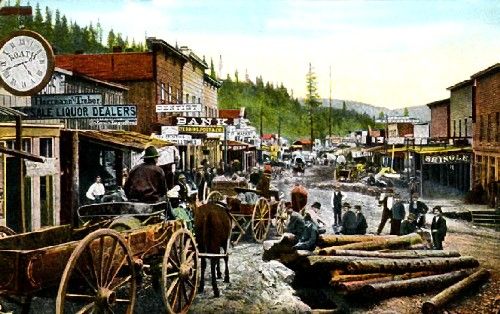 Al Swearingen recruited women from the east by advertising jobs in hotels and promising to make them stage performers at his theater. Purchasing a one-way ticket for the women, when they arrived, the hapless ladies would find themselves stranded with little choice other than to work for the notorious Swearingen or be thrown into the street. Some of these desperate women took their own lives rather than being forced into a position of virtual slavery. Those who stayed were known to sport constant bruises and other injuries.

The Gem prospered with the entertainment provided and numerous women and soon became the camp’s chief attraction. Drawing its support from many so-called leading citizens, the saloon was left alone by the authorities.

In the front of the theater were a bar and many seats for spectators. The rear of the building held several small curtained rooms where the Gem’s “painted ladies” entertained their customers. The Gem band was said to have played every night on its balcony, while the girls beckoned to potential customers to come forth. Once inside, the women charged their customers 10¢ for a dance, 20¢ for a beer, and $1 for a bottle of wine. As to charges for the “other,” it remains unknown. 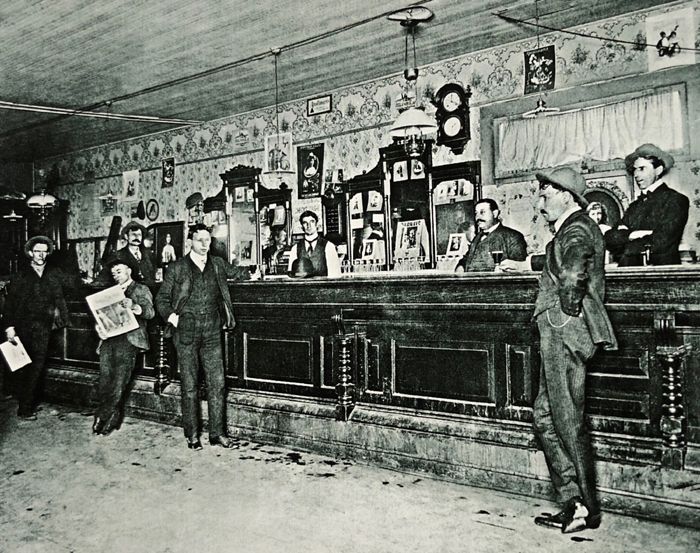 The bar at the Gem Variety Theatre in Deadwood, South Dakota. Al Swearingen behind the bar.

In addition to the many girls, Swearingen’s staff included Dan Doherty, who acted as general manager, Johnny Burns, who was in charge of the girls, and several bouncers. These men were said to have been as brutal to the girls as Swearingen, with the beating of the women being a common practice.

Though a popular spot amongst the rowdy miners of the camp, the Gem quickly gained a reputation as a violent saloon where gunshots flying through its interior became commonplace. Sometimes aimed between men in drunken fights, the bullets were just as often aimed at the girls themselves. At one time, a Gem prostitute named Tricksie shot a man through the front of his skull after taking a beating from him. However, the man didn’t immediately die. The doctor who was called in put a probe through the man’s head amazed that he survived the gunshot at all. He died about 30 minutes later.

Where was Marshal Seth Bullock while all this was going on at the notorious theater? Reportedly, Bullock and Swearingen agreed to draw an imaginary line on Main Street that marked what was referred to as the “Badlands” from the rest of the town. From then on, Swearingen controlled lower Main Street, and Sheriff Bullock controlled upper Main Street. Swearingen’s talent for alliances and financial payoffs also kept him insulated from the general drive to clean up the town.

In the early summer of 1879, the Gem suffered a fire, but the damage was quickly repaired and rebuilt. Just three months later, in September 1879, the entire town of Deadwood suffered a disastrous inferno that claimed some 300 of its buildings, including the Gem Theater.

Swearingen again rebuilt, this time from the ground up, resulting in a bigger and better theater. When the new Gem was opened in December 1879, The Daily Times touted it to be the finest theater building ever proposed for Deadwood.

Continuing to prosper, the Gem averaged a nightly profit of $5,000, sometimes even reaching as high as $10,000. But, for Swearingen, it was not to last. In 1899, the Gem suffered its final destructive fire, and Swearingen called it quits, leaving Deadwood for good. 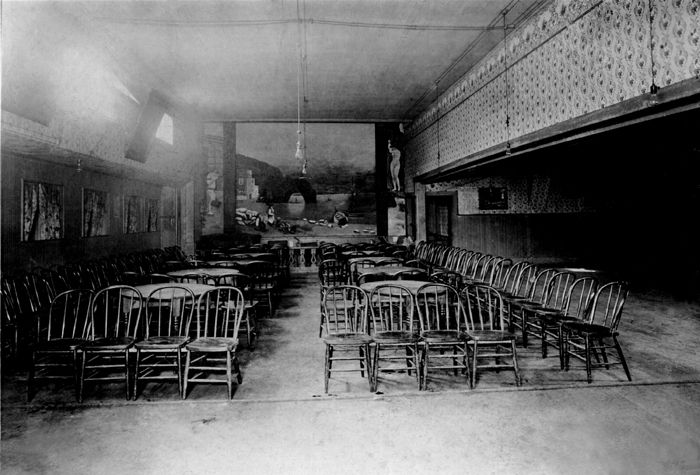 The stage area in the Gem Variety Theatre in Deadwood, South Dakota.

After its final demise in 1899, the newspaper had this to say of the Gem:

“harrowing tales of iniquity, shame, and wretchedness; of lives wrecked and fortunes sacrificed; of vice unhindered and esteem forfeited, have been related of the place, and it is known of a verity that they have not all been groundless.”

The Gem was one of the longest continuously-operating entertainment venues in Deadwood; however, after its demise, the Gem was referred to in the press as the “everlasting shame of Deadwood,” “a vicious institution,” and a “defiler of youth and a destroyer of home ties.” 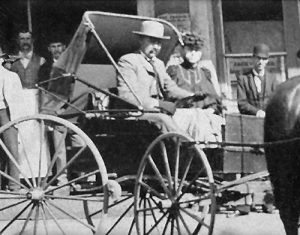 Al Swearengen in a buggy in Deadwood, South Dakota.

Swearingen returned to Iowa and married Odelia Turgeon in 1899.  Another fire, six months later, destroyed the adjacent buildings to the remains of the Gem, leaving a large vacant lot. In 1921, the site became the location of Deadwood’s first gas station. Today, the location of the Gem Theater is the site of the Mineral Palace Casino.

On October 2, 1904, Al’s twin brother Lemuel was attacked after leaving his meat market with $200 in his pocket. He suffered a blow to the head, was shot five times but was not robbed. Lemuel was found unconscious the next day and seen by doctors but died without regaining consciousness eight days later.

Al Swearingen left Iowa and eventually made his way to Denver, Colorado, at about the same time. Less than two months later, on November 15, 1904, Al Swearingen was also found dead on the street near his home. He, too, had been struck on the head with a heavy, blunt object. At the time, the Denver city police could not determine if his death was caused by an accident or murder. Later reports said he died penniless while trying to hop a train. 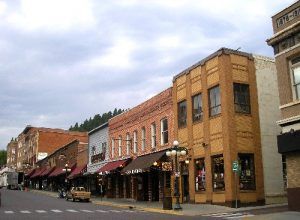 Modern historians believe that Lemuel’s attack was a case of mistaken identity and that Al was the actual target. If correct, they believe that Al’s death was a homicide.

For more information on the Gem Theater, Deadwood, and its notorious characters, visit the Adams Museum at 54 Sherman Street, Deadwood, South Dakota.