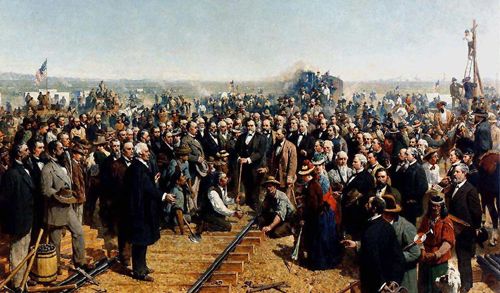 By the terms of the supplementary Charter of 1864, a great incentive was given the two Companies, the Union Pacific Railroad and the Central Pacific Railroad to get down as great a mileage as possible. In addition to the Government grant of Land and Bonds based on mileage, there was the traffic of the Mormon country and Salt Lake City at stake. Besides this, it was readily seen that the line having the greatest haul would be correspondingly benefited when it came to subdividing earnings on trans-continental business. With these for incentive, both Companies put forth every effort to cover the ground. In the early part of 1869, rails of each Company were going down from six to ten miles a day. Records in track-laying were made then that has never been broken. Near Promontory a sign is still standing to announce “Ten miles of track laid in one day.”

Actual figures are not obtainable, but reliable contemporaries at that time stated there were twenty-five thousand men employed on the construction work of the two lines, as well as six thousand teams and two hundred construction trains. Both Companies were anxious to establish a point of advantage that they could use in the controversy that was inevitable and which would determine the mileage and territory each was to enjoy.

As stated the two tracks were brought together at Promontory on May 9th, 1869, but two rail lengths were kept open until the questions at issue were adjusted and also until a suitable program could be arranged for celebrating the event. Everything satisfactorily arranged, Monday, the 10th of May 1869, was set for the ceremonies.

The Central Pacific Railroad completed their track up to Promontory May 1st. It was the intention to have the opening ceremonies on Saturday, May 8th, and the Central Pacific officials were on hand for that purpose. The Union Pacific party coming west were delayed some forty-eight hours at Piedmont by a gang of graders and track-layers, who not having received their wages sidetracked the special train with Vice-President Durant and his party, holding them as hostages until the Company had paid over to the contractor some two hundred and fifty thousand dollars due him and which he in turn distributed among his men.

As early as 8:00 A.M. on the 10th, the spectators, mostly workmen of the respective companies, or other citizens of the railway camps commenced to arrive. At 8:45 a special over the Central Pacific Railroad came in with a large number of passengers. At 9:00 the Union Pacific Railroad contingent arrived in two trains and at 11:00 the Central Pacific Railroad’s second train, carrying President Stanford and other officers of that Company, and their guests completing the party. In all, there were about eleven hundred persons present, including a detachment of the 21st United States Infantry, and its band from Fort Douglass, Utah. 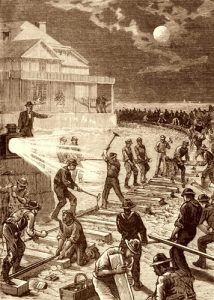 This tie was put in position by Superintendents Reed of the Union Pacific Railroad and Strawbridge of the Central Pacific Railroad, and was taken up after the ceremonies and has since that time been on exhibition in the Superintendent’s office of the Southern Pacific Company at Sacramento, (California) Depot.

For the closing act, California presented a spike of gold; Nevada one of silver; Arizona one of combined iron, gold and silver; and the Pacific Union Express Company, a silver maul. At twelve noon at a given signal, Governor Stanford on the South side of the rail and Vice-President Durant on the north, struck the spikes driving them home.

The two engines were then moved up until they touched and a bottle of wine poured over the last rail as a libation. The trains of the respective roads were then run over the connecting link and back to their own lines. Speeches and a banquet closed the occasion.

In the Crocker Art Gallery in Sacramento hangs a large oil painting of the meeting of the two engines. The artist having inserted actual portraits of many of the more prominent officials of the two lines who participated in the ceremonies.

By previous arrangement, the strokes on the final spikes were to be signaled over all the wires of the several telegraph companies through the United States, business being suspended for this purpose. First, the message was sent over the wires “Almost ready. Hats off; prayer is being offered.” Then “We have got done praying; the spike is about to be presented.” Seven minutes later “All ready now; the spike will soon be driven.” The signal will be three dots for the commencement of the blows. Connection being made between the hammers and the wires, the blows on the spikes were flashed over practically the whole telegraph system of the United States. At 2:47 P.M. Washington time, 12:47 P.M. Promontory local time, came the signal “Done” and the bells of Washington, New York, Chicago, San Francisco, and hundreds of other cities and towns announced that the American continent had been spanned, that through rail communication was established, never to be broken, that the Union Pacific Railroad was completed. 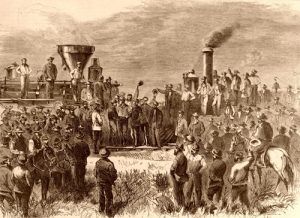 The formal announcement to President Grant and through the Press Associations to every inhabitant of the civilized world was couched in the following language:

“The last rail is laid, the last spike driven. The Pacific Railroad is completed. The point of junction is ten hundred and eighty-six miles west of the Missouri River and six hundred and ninety miles east of Sacramento City.”

No sooner were the ceremonies complete than there was a rush made to obtain souvenirs. In ignorance of the fact that the “Last Tie” had been taken up and an ordinary one substituted, the relic hunters carried off the substitute piecemeal. In fact, some half dozen “last ties” were so taken in the first six months after the roads were completed.

An odd coincidence occurred at the closing ceremonies. The rail on the east was brought forward by the Union Pacific laborers—Europeans, that on the west by Chinese, both gangs having Americans as bosses. Consequently here were Europe, Asia, and America joining in the work, the Americans dominating.

Next morning the Union Pacific Railroad brought in from the East half a dozen passenger coaches for the Central Pacific Railroad, these being attached to the special train of Governor Stanford when he was returning to California, constituting the first through equipment.

All over the land, the different cities vied with one another in celebrating the event—which it was truly felt marked the beginning of a new epoch in the history of the United States.

New York City celebrated with the “Te Deum” being sung in “Trinity,” the chimes ringing out “Old Hundred” (Praise God from whom all blessings flow), and a salute of a hundred guns fired by order of the Mayor.

Chicago had a parade four miles long, the City being lavishly decorated, and Vice-President Colfax speaking in the evening.