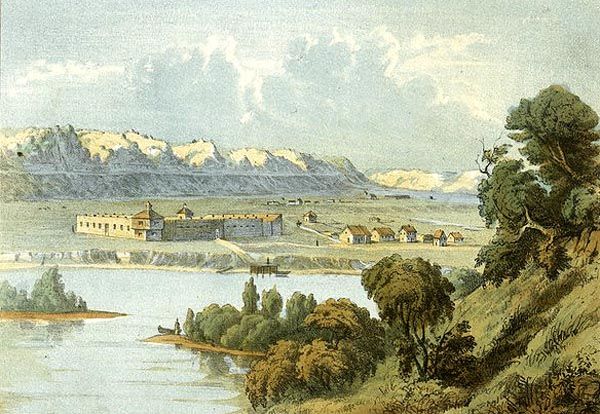 Located on a broad terrace overlooking the Mississippi River, three miles north of the confluence of the Mississippi and Wisconsin Rivers, Prairie du Chien was a crossroads of the fur trade in the Old Northwest. It was a rendezvous point for the hunters, trappers, and traders — white and Indian — who plied the route between Canada and the fur country west of the Great Lakes. 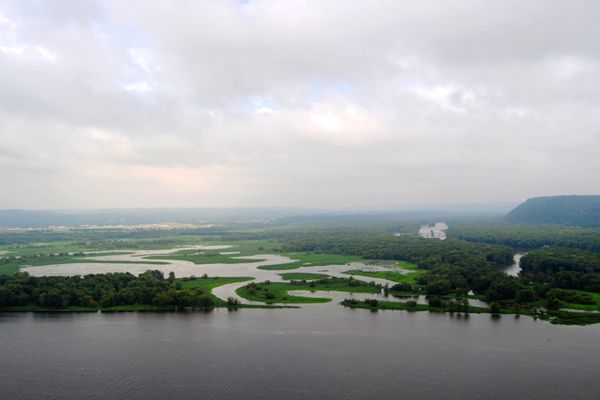 The confluence of the Mississippi and Wisconsin Rivers

Successively occupied by the French, British, and Americans — all of whom contributed to the settlement and development of the old Northwest — it has retained its historical character to a degree unsurpassed in the region. The concentration of historic sites and buildings on St. Feriole Island, the center of the earliest settlement, constitutes an outstanding interpretation of the fur trade, the West during the period of the military frontier, and steamboat commerce on the upper Mississippi River.

Prairie du Chien, as the western terminus of the Fox-Wisconsin portage, was a vital station on the route between Canada and the vast French-claimed heartland of North America. For more than a century the settlement was a base for French commercial exploitation of the entire region west of the Great Lakes.

Soon after Louis Jolliet and Pere Jacques Marquette passed nearby in 1673 while journeying down the Wisconsin and Mississippi Rivers, the site became a gathering place for French and Indian trappers, traders, and hunters. For a few years in the mid-1680s, the French maintained Fort St. Nicolas at the site. In the mid-1700s French stragglers may have settled there and named it for a Fox Indian chief whom they called Le Chien (“the dog”). A land claim made by three French-Canadians in 1781, however, is usually considered the date of permanent occupation.

After 1763, when France ceded her American territory to Britain, British fur traders moved into the Prairie du Chien region. During the War for Independence, the British built a fort in the town, from which they and Indian allies launched unsuccessful attacks against Cahokia, Illinois and St. Louis, Missouri.

Although the British ceded the Old Northwest to the United States at the end of the war, until 1796 British troops remained at Prairie du Chien and protected the British traders, who kept a firm grip on the fur trade. Even after that date the British, aided by the Indians, managed to retain their supremacy over the fur trade against the few Americans who attempted to penetrate the Great Lakes region.

In 1814, during the War of 1812, U.S. troops moved up the Mississippi River and built Fort Shelby at Prairie du Chien, but the British forces from Mackinac captured the weakly held post, which they renamed Fort McKay. After the Treaty of Ghent, ratified early in 1815, the British abandoned the site and the Americans occupied it. 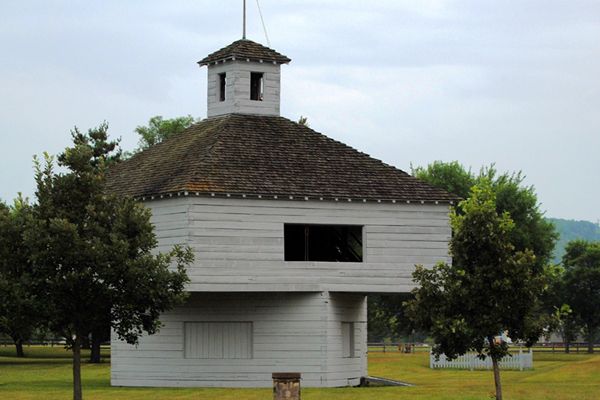 In 1816 U.S. troops erected Fort Crawford on St. Feriole Island, and the town became a major outpost of the American fur trade, which continued through the 1830s. John Jacob Astor established a sub-headquarters for his American Fur Company there, and it thrived as the western terminus of the water route from Mackinac, the central depot, via Lake Michigan’s Green Bay and the Fox and Wisconsin Rivers. Fort Crawford was of considerable importance on the Northwest military frontier during the period of pioneer American settlement of the country west of the Great Lakes. At the fort, in 1825 the United States signed the treaties of Prairie du Chien with the tribes in the region. The treaties involved no cession of land but created Indian boundaries in the region. In another treaty, in 1829, the Winnebago relinquished their title to lands south of the Wisconsin River. In that same year, the Army moved Fort Crawford about one mile from St. Feriole Island to the higher ground on the mainland, where modern Prairie du Chien grew up. In 1835 troops from the fort constructed a military road to Fort Winnebago. It subsequently extended to Fort Howard, at Green Bay, Wisconsin and became a major emigrant route. In 1856 the Army abandoned Fort Crawford but temporarily reoccupied it during the Civil War.

In the meantime, the advent of steamboat traffic on the Mississippi River, in the 1830s, had made Prairie du Chien a thriving river port and market center for grain and lumber. Further economic stimulation occurred in 1857 when the town became the river terminus of the Milwaukee and Mississippi Railroad, which ran westward from Milwaukee. A few years later the railroad, bridging the river, moved westward. 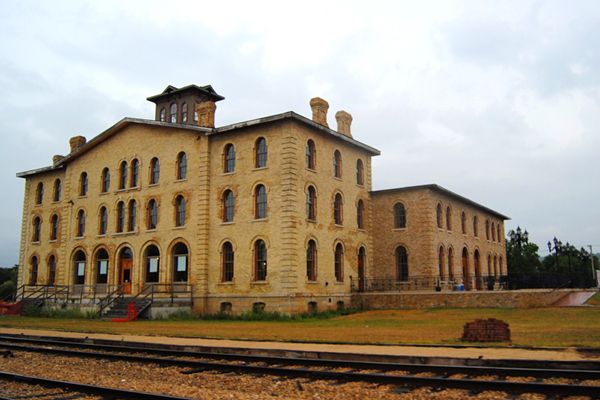 The Dousman Hotel, built 1864-65, is associated with Prairie du Chien’s role in post-Civil War transportation on the upper Mississippi.

The entire city of Prairie du Chien, both the old section on St. Feriole Island and the newer portion that grew up around the second Fort Crawford, on the mainland, appears much today as it did in the 19th century. The most notable historic structure is the palatial Villa Louis, built in 1843 as a Georgian mansion by Hercules Louis Dousman, wealthy and cultured American Fur Company agent, on the sites of Forts Shelby, McKay, and the first Fort Crawford. In 1872 his widow remodeled the exterior in Victorian style. In the 1930’s Dousman’s granddaughters and the city of Prairie du Chien restored the mansion to its 1872 appearance. It is a three-story brick structure, furnished with period pieces and family heirlooms. Outbuildings on the 10-acre site include Dousman’s office, coach house, icehouse, and preserve room; these have not been essentially altered since their construction, in 1843. The mansion is open to the public from May to November. 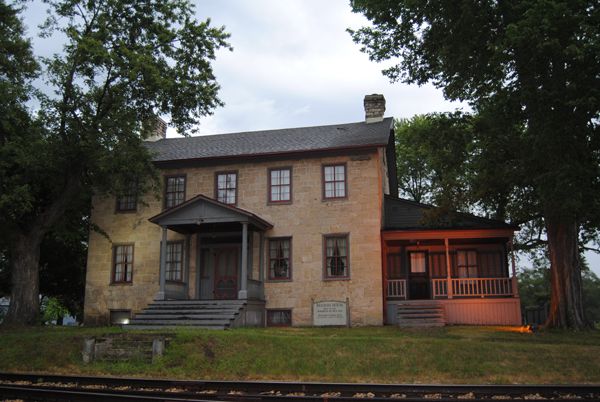 In 1808 Michael Brisbois, a French-Canadian and one of the earliest settlers in the town, erected the two-story Brisbois House. The basement contains fur-storage space, and the house is furnished with original pieces. It is privately owned but is open to the public. The Astor Warehouse, constructed of stone by the American Fur Co. about 1835, is in fair condition but is now a place of business. In 1864 the Milwaukee and Mississippi Railroad erected the Dousman Hotel, a three-story stone building, to accommodate its passengers. The hotel, somewhat altered, is privately owned and is not open to the public. The Diamond Jo Warehouse, a long one-story structure erected during the Civil War, recalls steamboat days. In private ownership, it is in poor condition and is not open to the public. Only the restored post hospital remains of the second Fort Crawford, the major portion of whose site is occupied by St. Mary’s Academy, for girls. Containing a museum of Wisconsin medical history, it is open to the public.