During the early years of settlement of Kansas when it was a territory, little trouble with the Indians was experienced. A few depredations were committed by some of the tribes, but none of them was of sufficient magnitude to cause serious alarm. Colonel Edwin V. Sumner led an expedition into the Indian country in 1857 in which he and his troops were involved in the Battle of Solomon Fork in Graham County in July. In the spring of 1859, a battle was fought on Crooked Creek, near the southwest corner of the present Ford County. The action was an incident of the Washita Expedition, which was under command of Major Earl Van Dorn, who afterward became a general in the Confederate Army. These two affairs were the most important events in connection with Indian warfare during the territorial period. 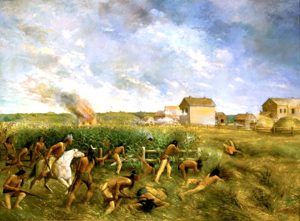 Shortly after the outbreak of the Civil War, while the Federal government was engaged in conflict with the Southern Confederacy, the Indians took advantage of the opportunity to harass the white settlements in the states west of the Mississippi River. The first notable instance of this was the Sioux uprising in Minnesota in the summer of 1862. The following year, the Comanche, Cheyenne, and Kiowa became troublesome in Colorado, requiring the presence of troops to protect the people. On November 29, 1864, Colonel John Chivington’s command attacked a camp of Cheyenne and Arapaho on Sand Creek, Colorado and killed a large number of Indians, for which Chivington was subjected to an investigation.

In 1864 General Samuel R. Curtis was sent to Fort Riley, Kansas by the war department to raise a force of militia for the relief of some wagon trains corralled on Cow Creek on the Santa Fe Trail on account of the hostility of the Indians. The same summer Captain Henry Booth and Lieutenant Hallowell, escorted by Company L, of the Eleventh Kansas Cavalry — while on a tour of inspection, became separated from their escort and were chased for some distance by a large body of Indians, but succeeded in escaping. Some of the natives in the Indian Territory (Oklahoma) acted with the Confederate armies and caused some apprehension among the settlers of southeastern Kansas.

In the years 1865-66 several expeditions were led against the hostile Indians of the northwest, the storm centers being at Fort Laramie, Wyoming and in the Black Hills of South Dakota. The massacre by the Sioux at Fort Phil Kearny, Nebraska in the fall of 1866 increased the prestige of Chief Red Cloud, who planned a general uprising in August 1867. But, by that time the government was in a position to send sufficient military forces into the Indian country to forestall the movement. None of these conflicts was in Kansas, but the successive defeats of the Indians in the northwest caused the tribes to break up into small bands which gradually worked their way southward, raiding the settlements as they went.

On June 27, 1867, General William T. Sherman called upon the governor of Kansas for volunteers, and on July 1st, Governor Crawford issued a proclamation authorizing the organization, as speedily as possible, of one regiment of volunteer cavalry to be mustered into the United States service for a period of six months. A full regiment was not organized, but one battalion, known as the Eighteenth Kansas, was mustered in on July 15th for the purpose of guarding the employees on the Union Pacific Railroad, the western settlements, and the emigrant wagon trains.

The battalion was commanded by Major Horace L. Moore, formerly lieutenant-colonel of the Fourth Arkansas Cavalry. It consisted of four companies, numbering 358 officers and enlisted men. It served in western Kansas until November 15th, when it was mustered out. Despite the additional manpower, Cheyenne and Sioux Indians ambushed and killed a 2nd US Cavalry detachment of eleven men and an Indian guide near Beaver Creek in Sherman County, Kansas known as the Kidder Massacre.

Companies B and C of the Eighteenth Kansas were engaged in a fight with Indians on Prairie Dog Creek on August 21st known as the Battle of Beaver Creek.

The summer of 1868 witnessed considerable activity on the part of hostile Indians. Early in June, the Cheyenne made a raid as far as Council Grove, ostensibly for the purpose of revenging themselves on the Kanza Indians for injuries received from them in the previous fall near Fort Zarah. However, they robbed settlers, killed cattle, and committed other outrages on the whites. 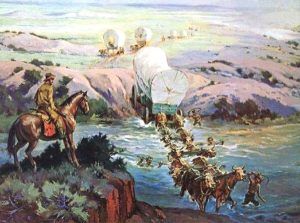 On August 4th, some 225 Cheyenne, Arapaho, and Sioux left Pawnee Fork and a few days later were on the Saline River. They raided the valleys of the Saline and Solomon Rivers, captured wagon trains, killed the escorts and burned the wagons, and carried two women — Miss White and Mrs. Morgan — into captivity.

The Indians finally extended their field of operations to within 20 miles of Denver, Colorado, their numbers increasing by the addition of other bands until a formidable force was gathered together. The governors of both Kansas and Colorado reported the outrages to the authorities at Washington, urging that something be done with the Indians, and threatening to call out the state troops. The national government tried to induce the Indians to return to their reservations and failing in this, General Philip Sheridan, commanding the Department of the Missouri, was ordered to take the field against the Cheyenne under Roman Nose and Black Kettle. It was in this campaign that Colonel George A. Forsyth’s band of scouts, armed with revolvers and repeating rifles, scouted the country about the headwaters of the Solomon River and Fort Wallace, Kansas and in September fought the Battle of Beecher Island.

On October 9, 1868, General Sheridan called upon Governor Samuel Crawford for a regiment of mounted volunteers “to serve for a period of six months, unless sooner discharged, against the hostile Indians on the plains.” The regiment consisted of twelve companies of 100 men each. On November 4 Governor Crawford resigned his office to take command of the regiment, which left Topeka the next day for the Indian country, under orders to join General Sheridan’s command at Camp Supply in Indian Territory. The march took 24 days, the regiment reaching Camp Supply on the 29th.

In the meantime, upon the approach of winter, Black Kettle’s band moved southward to the Washita River. George Armstrong Custer was sent out from Camp Supply , Oklahoma in pursuit, and late on November 26, the scouts came within sight of Black Kettle’s village. There, they made camp for the night, and at daybreak the next morning his bugles sounded the charge. With the band playing the Seventh regiment’s fighting tune of “Garry Owen,” Custer’s men swept like a tornado through the village. Black Kettle was killed early in the fight and the command of the Indians fell on Little Rock, a Cheyenne chief almost as well known as Black Kettle himself. The village was destroyed, but George Armstrong Custer soon learned that this band was only one of many and that there were, in the vicinity, about 2,000 warriors — Cheyenne, Arapaho, Kiowa, Comanche and a few Apache.