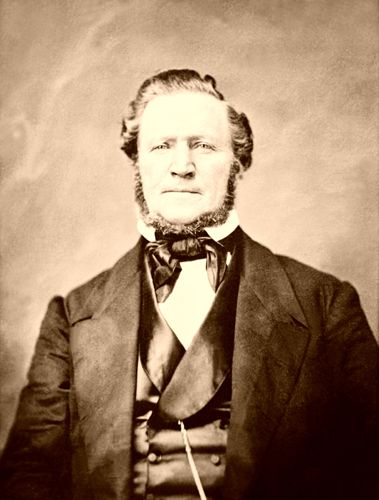 Leader of the Mormon movement to Utah, president of the church from 1847 to 1877, and the first territorial governor of Utah, Brigham Young’s legacy is varied, with praise for his many accomplishments and historical influence, as well as controversy for a number of 19th-century events.

Born on June 1, 1801, in Whitingham, Vermont, Brigham was the ninth of eleven children born to John Young and Abigail Nabby Howe. He was working as a carpenter and blacksmith when he married Miriam Angeline Works in 1824 and the pair had two daughters. He was drawn to Mormonism after reading the Book of Mormon shortly after its publication in 1830 and joined the church two years later. That same year, his wife, Miriam died.

In 1833, he moved to Kirtland, Ohio and two years later, was ordained an apostle and joined the Quorum of the Twelve Apostles as one of its inaugural members on February 14, 1835. In the 1840s he worked as a missionary in England, and back in the States helped to establish the city of Nauvoo, Illinois.

When Joseph Smith, the founder, and leader of the church was killed in 1844, Young succeeded him. Persecuted in Illinois, Young led his members to Utah in 1847. As the colonizer and founder of Salt Lake City, Young was appointed the territory’s first governor and superintendent of Indian affairs by President Millard Fillmore. Young quickly began to establish settlements throughout Utah, organized a militia, created Indian missions, directed the building of roads, and established businesses and services to allow the territory to be self-sustaining. 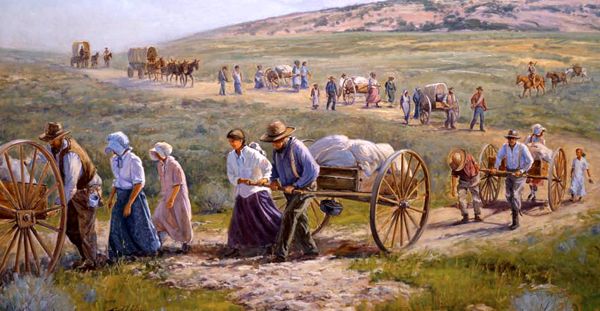 When federal officials received reports that Young was electing only Mormons to become government officials, President Buchanan decided to install a non-Mormon governor. This ignited what is known as the Utah War, a confrontation that lasted from May 1857 until July 1858. Though the war involved a few brief skirmishes, no actual battles occurred between the military forces.

However, it was at the height of the conflict, that the members of the Fancher–Baker wagon train were slaughtered on September 11, 1857, in what is known as the Mountain Meadows Massacre. The extent of Young’s involvement in the massacre has been a subject of much controversy virtually since the day of the tragic event. Though John D. Lee, the only Mormon punished for the tragedy, would claim that he was acting under direct orders from Young, the church leader was pardoned for any alleged role in the atrocity.

Unwilling to give up the territory, Young made plans to burn Salt Lake City and move his followers to Mexico, but at the last minute, he relented and agreed to step down as governor April 12, 1858. Continuing to lead the church and the vast majority of Utah’s population, relations between Young and future governors were mixed.

Young then focused on building his Mormon communities and businesses, which flourished over the next decade.

In 1869, the completion of the transcontinental railroad at Promontory, Utah threatened Young’s efforts to safeguard Mormon prosperity and lifestyles by bringing many more people into the territory. To combat this, he responded by establishing numerous Mormon monopolies and pushing the right of women to vote, greatly increasing the number of Mormon voters.

In the meantime, the public outcry regarding polygamy was increasing daily and in 1871, Young was tried under an 1862 federal law that prohibited polygamy in US territories. However, he was eventually acquitted. 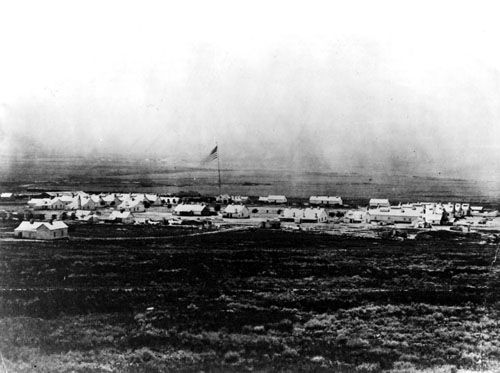 Young was indicted for being an accessory to the murder of Robert Yates, a killing that occurred in 1857 at the mouth of Echo Canyon. Though a man named Bill Hickman would eventually confess to killing Yates, Young and other military commanders were held liable for the military operation which resulted in death. The other leaders arrested were jailed at Fort Douglas, but Young was held under “house arrest.” However, a year later the charges were dismissed. Authorities also tried to hold someone liable for the Mountain Meadows Massacre more than a decade earlier, and prosecutors did their best to prove Young’s complicity but were unable to. 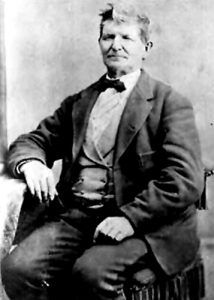 Only John D. Lee was arrested in 1874, who would initially testify that President Brigham Young had no knowledge of the event until after it happened. Later; however, he would say: “I have always believed, since that day, that General George A. Smith was then visiting southern Utah to prepare the people for the work of exterminating Captain Fancher’s train of emigrants, and I now believe that he was sent for that purpose by the direct command of Brigham Young .” Lee was found guilty and executed in 1877 and the question of Young’s role was never definitively determined.

Brigham Young died shortly after Lee’s trial, on August 29, 1877, and was buried in the Pioneer Mormon Cemetery in Salt Lake City. After his death, federal authorities continued their assault against Mormon theocracy and polygamy practices with a vengeance. In 1882 Congress passed the Edmunds Act, which restated that polygamy was a felony punishable by five years of imprisonment and a $500 fine. However, the church ignored the law, until the government actively began to prosecute church members.

Initially, polygamists became ineligible to hold political office, were disqualified from jury service, and known polygamists were dismissed from public offices. Over the next few years, amendments were made to the law which required plural wives to testify against their husbands, dissolved the Perpetual Emigration Fund (a loan institution that helped members of the church come to Utah from Europe), abolished the Nauvoo Legion, provided a mechanism for acquiring the property of the church, annulled territorial laws which allowed illegitimate children to inherit, and replaced local judges with federally appointed judges. With little choice, the Mormon church finally relinquished the practice of polygamy on October 6, 1890. In 1896 the territory of Utah was admitted into the union as the 45th state. Various former Mormons, who have continued the practice of polygamy to the present day, have been excommunicated by the Mormon church. 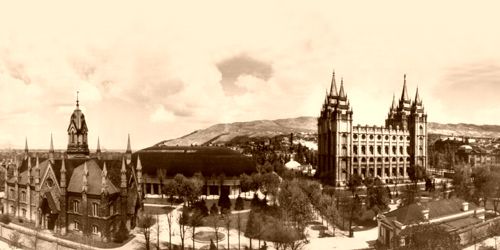 Other notable activities during Young’s lifetime were the establishment of the Mormon Tabernacle Choir, the founding of the University of Deseret, now the University of Utah, and the founding of the Brigham Young Academy, which later became Brigham Young University. In addition, his activities as a pioneer businessman were legendary, including transportation enterprises involving a wagon express company, a ferryboat company, and a railroad. In manufacturing, he established lumber and wool mills, an iron operation, and even a distillery. His greatest success as a businessman; however, was in real estate. Before his death he was living a lavish lifestyle and was the richest man in Utah, having an estimated personal fortune of about $600,000.

In addition to the Mountain Meadows controversy, Young was also criticized for his beliefs about African-Americans. In 1847 he implemented church policy that denied Mormon priesthood to blacks, a practice that remained in effect until it was finally repealed more than a century later, in 1978. And, unfortunately, the man could not hold his views to himself regarding his prejudice, several statements of which were published in the Mormon Journal of Discourses including:

“Shall I tell you the law of God in regard to the African race? If the white man who belongs to the chosen seed mixes his blood with the seed of Cain, the penalty, under the law of God, is death on the spot. This will always be so.” 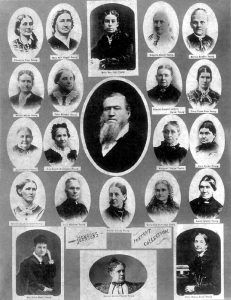 Brigham Young was an ardent supporter of polygamy,
marrying 56 wives during his lifetime and fathering 57 children. This photo shows less than half of his wives.

His greatest criticism; however, was the practice of polygamy. Though it was not he who “created” the practice, he was obviously one of its most ardent supporters, marrying 56 wives during his lifetime and fathering 57 children. At the time of his death, 19 of his wives had predeceased him, he was divorced from 10, survived by 23, and the status of the other four was unknown.