Lees Ferry, located on the Colorado River in Coconino County, Arizona, is a historic site located within the Glen Canyon National Recreation Area. It is named for Mormon Leader John D. Lee, who set up ferry service for Mormon settlers heading south to Arizona. 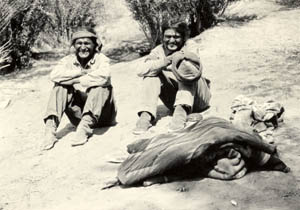 Prior to this time, the site had long been occupied by Native Americans, beginning about 11,500 years ago. These people included the Anasazi, Paiute, and Navajo peoples. Here was one of the only places in hundreds of miles from which one could easily access the Colorado River from both sides.

The first Europeans who came to the area were members of the 18th-century Domínguez-Escalante expedition when they attempted to find an overland route through the Southwest between Spanish settlements in present-day New Mexico and California. In late 1776, the party ran out of supplies in what is now southern Utah and, having decided to turn back towards Santa Fe, had to find a way to cross the Colorado River. At that time, their Native American guides told them of two regional fords of the river — one at the site of Lees Ferry and the other at Glen Canyon.

When the explorers arrived at Lees Ferry in October, they found the river too wide and deep and had no choice but to head for the second ford more than 40 miles upstream. Almost two weeks later, they successfully crossed the river and made it back to Santa Fe on January 2, 1777.

Years later, in March of 1864, Mormon pioneer Jacob Hamblin and his men built a raft at the mouth of the Paria River and made the first successful crossing at the point on the Colorado River that would become Lees Ferry, transporting all 15 men, their supplies, and horses. Hamblin was on a mission to warn the Navajo of northern Arizona to stop making raids into Utah, stealing livestock, and threatening Mormon expansion. The lands into which the pioneers wanted to move was viewed as “unsettled” territory, theirs for the taking under the precepts of Manifest Destiny, despite millennia of native occupation. Over the next few years, the “war” between the natives and the Mormons escalated, with the Paiute beginning to make raids on Anglo settlements. In an effort to deflect native threats to their vulnerable southeastern frontier, the Mormons posted guards at the Ute Ford/Crossing of the Fathers and at “Pahreah Crossing,” which later became the site of Lees Ferry, in the winter of 1869-1870. 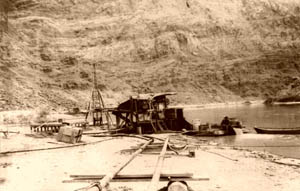 In September 1870, Hamblin guided an expedition from southern Utah to the upper Paria River and on to Pipe Springs. This notable expedition included Major John Wesley Powell, Mormon church president Brigham Young, and Mormon leader John D. Lee. As a result of this fortuitous meeting of powerful leaders, John D. Lee was sent to establish a ferry crossing. Lee’s new post was also brought about by another factor: his supposed role in a bizarre and violent chapter in Mormon history, the Mountain Meadows Massacre. Lee became the sole Mormon scapegoat for the murder of 120 eastern emigrants and was excommunicated; his relative seclusion at the ferry kept him from other Mormons and the authorities, while the Church of Latter-Day Saints turned a blind eye to the situation.

John D. Lee, a practicing polygamist, arrived with two of his wives and his children and created a small settlement named Lonely Dell due to its austere remoteness. He then built stone and wooden homes for his families, as well as a dam and an irrigation system for farming. The Mormon Church provided the lumber and manpower to build the first real ferryboat at Lees Ferry, the Colorado, first launched on January 11, 1873. It was the first of many boats that would ply the treacherous and fluctuating river at this point. 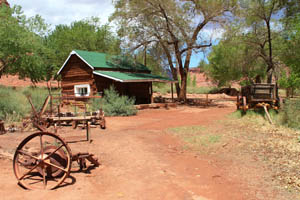 Although approach roads on either side of the river had yet to be built, wagonloads of colonists began arriving to be ferried across the Colorado River to begin new lives in Mormon settlements in Arizona. Tensions between the Mormons and the Navajo began mounting again in 1874, precipitating the construction of a defensive fort, which was soon converted into a trading post, and later a residence, school, and mess hall. This building, the Lees Ferry Fort, is one of the few historic buildings still intact at Lees Ferry.

In 1877, John D. Lee was tried for his role in the massacre; the only Mormon ever held accountable out of the over 50 men who had participated. Found guilty, he was executed by firing squad at Mountain Meadows on March 28, 1877.

Ownership of the ferry operation fell into the hands of Lee’s wife, Emma, a capable woman who operated the ferry and worked the ranch for several years. By this time, the Mormon Church was well aware of the importance of Lees Ferry as a link between settlements in Arizona and Utah. In 1879, the Church bought the ferry rights from Emma Lee for $3,000 and sent Warren Marshall Johnson and his plural families to the ferry to take over operations. In 1896 the ferry was transferred to Jim Emett, who installed a cable across the Colorado River to reduce the risk of boats washing downstream during high water. During this time, Lees Ferry and the surrounding area attracted people because of a series of gold strikes in southern Utah, the first of which was found in 1889. 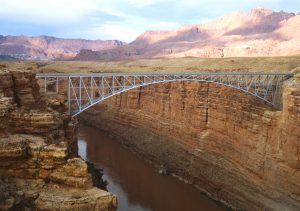 In the late 1920s, the ferry was instrumental in transporting materials to build a bridge over the river. However, in June 1928, the ferryboat capsized, drowning three men and dumping a Ford Model T. The ferry was never replaced, and the first Navajo Bridge was completed at a location four miles downstream seven months later.

Today Lees Ferry site is a well-known fishing and boat launching point, including for whitewater rafting trips through the Grand Canyon. It is the only place within Glen Canyon where visitors can drive to the Colorado River in over 700 miles of canyon country. Just upstream from the Lees Ferry launch ramp is the ferry crossing site and several historic buildings. Of special interest is Charles H. Spencer’s attempt to extract gold from the clay hills here in 1910. Two of the stone buildings, a steam boiler, and the remains of a sunken paddlewheel steamboat remain from his efforts. The trail is about a two-mile round trip over mixed terrain.

Lees Ferry is 42 miles from Page via Hwy 89 south and Hwy 89A west. The Lees Ferry Junction and Park Entrance are in Marble Canyon, just west of Navajo Bridge Interpretive Center. A paved road leads five miles to the Ferry area, where available services include a National Park Service campground, dump station, and public launch ramp. 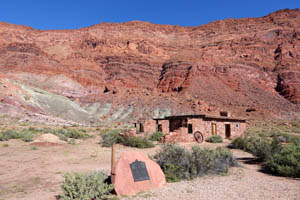