Jump to: About Memorial Day 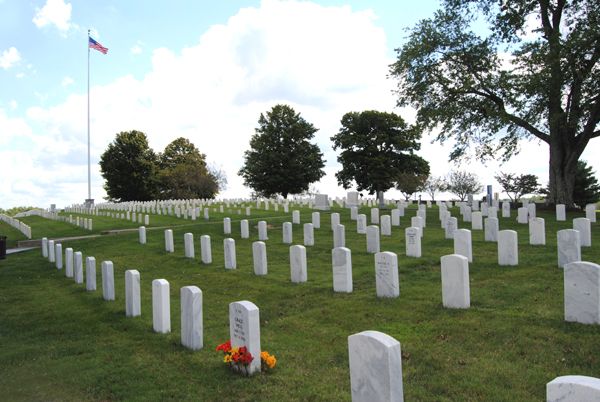 The burial practices for soldiers and sailors in the United States evolved. Soldiers killed in the American Revolution and the War of 1812 were usually buried in churchyards or family cemeteries. The U.S. Army established many forts to protect the frontier as people moved westward.

Post cemeteries, such as Fort Sam Houston, in San Antonio, Texas, were established for soldiers and family members. At the same time, the growing urban population and concerns about sanitation caused many churches and cities to establish new cemeteries on the undeveloped outskirts of cities. The first of these rural cemeteries was Mount Auburn, created in 1831 outside of Boston, Massachusetts, which was laid out like a park so that families could spend their leisure time with their deceased relatives.

At the beginning of 1861, neither the post cemeteries nor the rural cemeteries were prepared for the burial of more than 600,000 men who died during the Civil War. The nation needed new burial practices to deal with the changing realities of war. Weapon accuracy and fighting techniques led to more casualties than in previous wars; railroads and steamships carried soldiers to battles farther and farther from their homes; disease caused a high percentage of the deaths on battlefields, in prisoner-of-war camps, and hospitals. 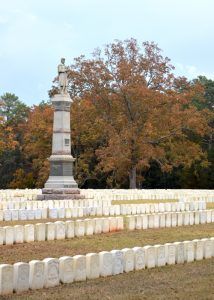 Before the Civil War, the burial of the war dead was the responsibility of the Army’s Office of the Quartermaster General, which also provided food, shelter, and supplies to the soldiers. This changed in September 1861, when the United States War Department issued General Orders No. 75, which designated Union commanding officers responsible for burying the dead from their units. This order presented many challenges. Fighting often killed a large number of soldiers, including the commanding officer. Of the survivors, after a long and arduous battle, few were capable of moving bodies and digging graves due to fatigue, hunger, and injury. In addition, materials and information for grave markers were often non-existent.

Many battles occurred on farm fields, so soldiers often received hasty burials in shallow graves where they fell. Commanding officers were also required to keep records of deceased soldiers and burial site locations. This proved difficult because few soldiers had any form of identification on them. Some soldiers pinned a piece of paper to their clothing with their name and address. Dog tags did not become a standard-issue until the 20th century. While some wealthy families paid to have their sons’ bodies sent home by train, the long distances and high costs made this impossible for most families. Stories of family members and friends searching for the body of a deceased soldier were common to the history of the Civil War.

In 1861, the Board of Governors of the Soldiers’ Home in Washington, D.C., permitted the Army to bury soldiers who died in and around the capital city in a section of its cemetery. However, this land quickly filled up. Faced with the growing number of Union dead, the U.S. Congress passed legislation in July 1862, which among other actions, including pay, contracts, and rations, authorized the President to purchase land to establish cemeteries for the burial of those fighting on behalf of the United States. This, of course, did not include those fighting for the Confederate States of America. The first cemeteries were established near key locations and battlefields, including Mill Springs National Cemetery in Nancy, Kentucky; hospitals, including Keokuk, Iowa; and other troop concentration points such as Alexandria, Virginia. By the end of the Civil War in the spring of 1865, there were approximately 30 national cemeteries and seven soldiers’ lots in private cemeteries. Despite this, many soldiers were still lying in farm fields due to hastily conducted wartime burials, often having their remains exposed over time. 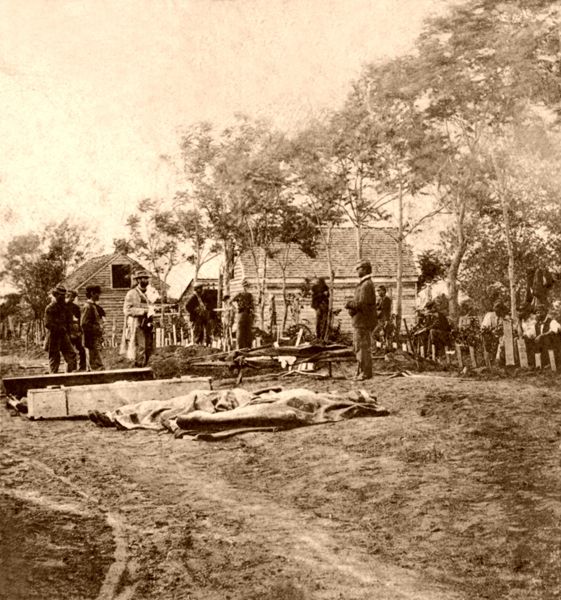 By 1867, the growing concern about the conditions of these wartime interments led to a new effort to provide a proper burial for every Union soldier and sailor who died during the war. The Office of the U.S. Quartermaster General established national cemeteries in central locations such as Memphis, Tennessee, where they assembled remains from around the region for burial. Among the re-interments were soldiers from the United States Colored Troops.

Also in 1867, the “Act to Establish and Protect National Cemeteries” required the Secretary of War to enclose every national cemetery with a stone or iron fence, to mark every gravesite with a headstone, appoint a superintendent to each cemetery, and construct a lodge for the superintendent to occupy. Despite these requirements, a permanent stone marker design was not adopted until 1873. Several years later, in 1879, Congress authorized the furnishing of headstones for the unmarked graves of veterans in private cemeteries.

In 1873, national cemetery interment eligibility expanded to include all Union veterans as a final benefit of service to the country. Eligibility requirements for national cemeteries continued to expand in the 20th century to include most honorably discharged veterans, their spouses, and dependent children. 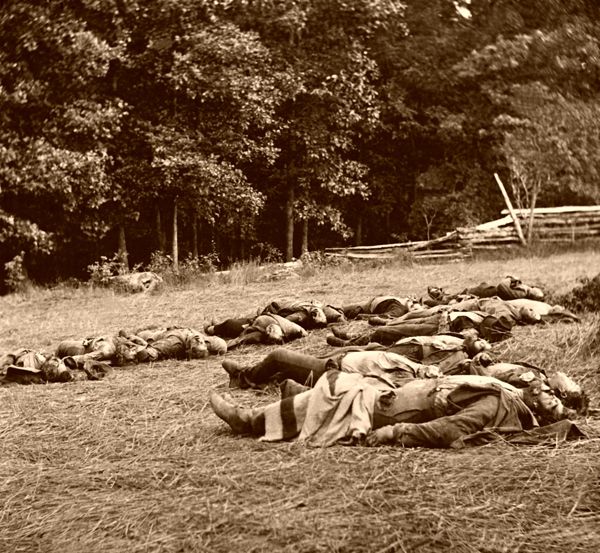 Confederate prisoners of war were often interred in “Confederate sections” within the national cemeteries. Generally, within national cemeteries and at other cemeteries under the care of the Federal Government, graves were marked first with wooden headboards and later with marble markers with just the name of the soldier engraved on the stone that they were indistinguishable from civilians buried in the national cemeteries. Private organizations, especially women’s organizations established in former Confederate states after the war, assumed responsibility for Confederate reburials. One of the more prominent groups was the Hollywood Memorial Association, which raised funds to move the bodies of Confederate soldiers from the battlefields of Gettysburg and Drewry’s Bluff to Hollywood Cemetery in Richmond, Virginia. The appearance of grave markers varied in these Confederate cemeteries depending on the preferences of the supervising organization.

The Federal Government first became involved in permanently marking Confederate graves in 1906. That year, Congress authorized the furnishing of headstones for Confederate soldiers who died in Federal prisons and military hospitals in the North and were buried near their places of confinement. The act also established the Commission for Marking Graves of Confederate Dead, whose job was to ensure that the graves of Confederate soldiers in the North received markers. The design for these grave markers was to be more or less identical to that approved in 1901 for marking Confederate graves at Arlington National Cemetery. The headstone was the same size and material as Union soldiers, except the top was pointed instead of rounded, and the U.S. shield was omitted. Individual graves were marked at places such as Rock Island Confederate Cemetery, Illinois, and Camp Chase Confederate Cemetery, Ohio, both large prisoner of war camps sites. Confederate graves within national cemeteries in the North, such as Woodlawn National Cemetery, New York, were also re-marked with the new headstones at this time.

In places where the Commission was unable to mark individual graves, such as Point Lookout Confederate Cemetery, Maryland, and Finn’s Point National Cemetery, New Jersey, a single monument was erected that featured bronze plaques bearing the names of those who died at the associated prisoner of war camps. Finally, an Act of January 20, 1914, authorized the furnishing of headstones for the unmarked graves of Union and Confederate soldiers, sailors, and marines in national, post, city, town, and village cemeteries. This provision allowed graves of Confederate soldiers buried in national cemeteries in the South, such as Fort Smith and Little Rock National Cemeteries in Arkansas, to be marked with the distinctive Confederate-style headstone.

Written by Kelly Merrifield for the National Park Service. Compiled and edited by Kathy Weiser-Alexander/Legends of America, updated November 2021. 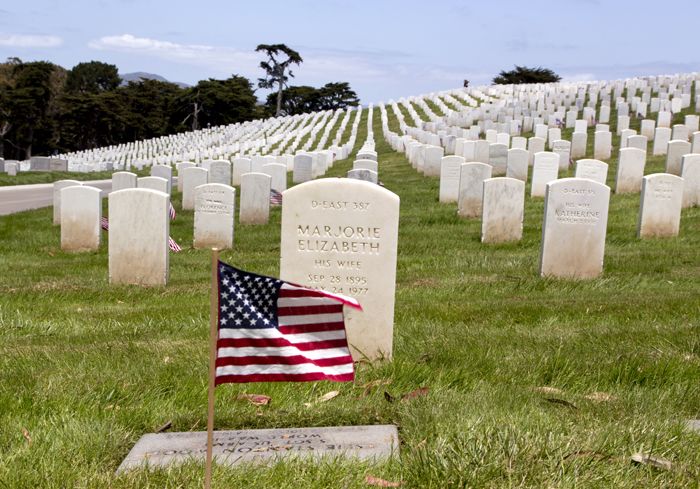 Recognized today as a national holiday to honor all Americans who have died while in military service, this holiday started as “Decoration Day.” Its origins can be traced back to as early as June of 1861 where a claim was made that Civil War soldiers’ graves were decorated in Warrenton, Virginia. There is also documentation showing women in Savannah, Georgia, decorating Confederate graves in 1862.  Boalsburg, Pennsylvania, claims to be the birthplace of Memorial Day due to women decorating soldiers’ graves on July 4, 1864, at the National Cemetery in Gettysburg.

However, the first widely recognized observance of “Decoration Day” came just after the war ended on May 1, 1865. Black residents of Charleston, South Carolina, and teachers and missionaries organized an event to honor 257 Union prisoners who had died while being held at the Charleston Race Course. Almost 10,000 people showed up for the event, most laying flowers on the burial field, now Hampton Park.  Years later, it would be labeled as the “First Decoration Day” in the North. Other observances were held throughout the North and South over the following decades, with the term “Memorial Day” first being used in 1882.  That term would not become common until after World War II.

Memorial Day would not become an official Federal Holiday until 1967. In June of 1968, the United States Congress passed the Uniform Monday Holiday Act, which moved the observance to a specific Monday to create a convenient three-day weekend.  The change moved it from its traditional May 30 date to the last Monday in May. The Holiday Act became law in 1971.

Today, Memorial Day continues to honor those who have fallen in service of their country with solemn observances mixed with family gatherings to kick off the Summer season.  The traditional observance is to raise the U.S. Flag to the staff’s top, then slowly lower it to the half-staff position in the morning. This is to remember the million or more men or women who have died in service.  Then at Noon, the flag is raised to full-staff for the rest of the day to raise their memory by the living, who resolve that they have not died in vain.

Death & Dying in the Civil War