Veterans Day is November 11, and Legends of America salutes all those who have served this great nation.  Your sacrifice and service are second to none! 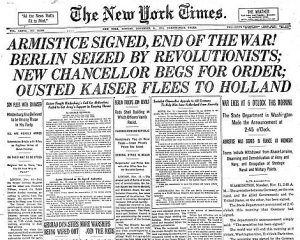 It was “the war to end all wars.” Or at least that’s how World War I was viewed in November of 1918 when it was known simply as “The Great War”.

The armistice, or truce, between Allies and Germany, marked the end, on the western front at least, of a global conflict that began four years earlier and would claim millions of lives as it spread throughout Europe.

In late September of 1918, Germany was facing a hopeless military situation and was forced to respond to U.S. President Woodrow Wilson’s “Fourteen Points” from earlier in January. The actual terms of Wilson’s policies were primarily written by French Marshal Ferdinand Foch, and included a call for the halt in fighting, removal of German troops to within their own borders, exchange of prisoners, promise of reparations, and the preservation of infrastructure among the terms.

Although the armistice ended the fighting, it would be over six months before negotiations were complete on the Treaty of Versailles, which officially ended the war in June of 1919, and in the meantime, battles would continue in parts of the Russian Empire on the eastern front.

In November of 1919, President Wilson proclaimed November 11 as the first commemoration of Armistice Day.  In his proclamation, Wilson said:

“To us in America, the reflections of Armistice Day will be filled with solemn pride in the heroism of those who died in the country’s service and with gratitude for the victory, both because of the thing from which it has freed us and because of the opportunity it has given America to show her sympathy with peace and justice in the councils of the nations…”

Originally the idea for the celebration included a day of parades and public meetings, along with a brief suspension of business beginning at 11:00 a.m.  Then in June of 1926, the United States Congress officially recognized the end of World War I with this resolution:

Whereas the 11th of November 1918, marked the cessation of the most destructive, sanguinary, and far-reaching war in human annals and the resumption by the people of the United States of peaceful relations with other nations, which we hope may never again be severed, and

Whereas it is fitting that the recurring anniversary of this date should be commemorated with thanksgiving and prayer and exercises designed to perpetuate peace through good will and mutual understanding between nations; and

Whereas the legislatures of twenty-seven of our States have already declared November 11 to be a legal holiday: Therefore be it Resolved by the Senate (the House of Representatives concurring), that the President of the United States is requested to issue a proclamation calling upon the officials to display the flag of the United States on all Government buildings on November 11 and inviting the people of the United States to observe the day in schools and churches, or other suitable places, with appropriate ceremonies of friendly relations with all other peoples.

It would not be until 1938 that Congress would approve an Act making November 11 “Armistice Day”, an official legal holiday.  Honoring veterans of “The Great War” and dedicated to the cause of world peace, Armistice Day would continue until 1954, when at the urging of Congress and veterans organizations, the Act was amended to remove the word Armistice and replace it with “Veterans”.  The amended Act was officially approved on June 1, 1954, making November 11 a day to honor American veterans of all wars. 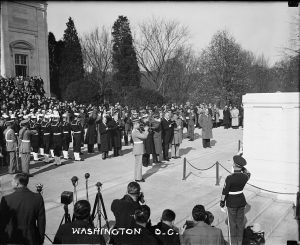 “In order to ensure proper and widespread observance of this anniversary, all veterans, all veterans’ organizations, and the entire citizenry will wish to join hands in the common purpose. Toward this end, I am designating the Administrator of Veterans’ Affairs as Chairman of a Veterans Day National Committee, which shall include such other persons as the Chairman may select, and which will coordinate at the national level necessary planning for the observance. I am also requesting the heads of all departments and agencies of the Executive branch of the Government to assist the National Committee in every way possible.”

The official Veterans Day observance continued to be recognized on November 11 until in 1968 the Uniform Holiday Bill made changes to ensure a three day holiday weekend for Federal employees. But Congress managed to confuse the public with this move and many states continued to observe as they had.  When Veterans Day was federally observed on October 25, 1971, it was met with much confusion and ultimately led to a return to the November 11 observance beginning in 1978.

In doing so, Congress ensured that the historical significance of Veterans Day was preserved, along with the importance of the holiday in focusing attention on American Veterans for their tremendous sacrifices for our nation and our freedom.

Veterans Day observance in the United States is different from that of November 11 observances in Europe, which continue to commemorate those who died in war. In the U.S. the date is a celebration of all Veterans, living or dead, regardless of conflict, and Memorial Day in May is instead used as a national remembrance of those Americans who have died in war.

“Here in America we are descended in blood and in spirit from revolutionists and rebels – men and women who dare to dissent from accepted doctrine. As their heirs, may we never confuse honest dissent with disloyal subversion.” 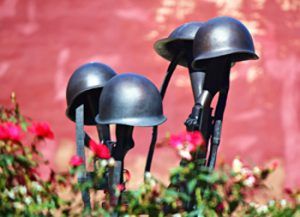 Memorial in Guthrie, Oklahoma remembers veterans of several wars where Americans have fought and died. Photo by David Fisk.