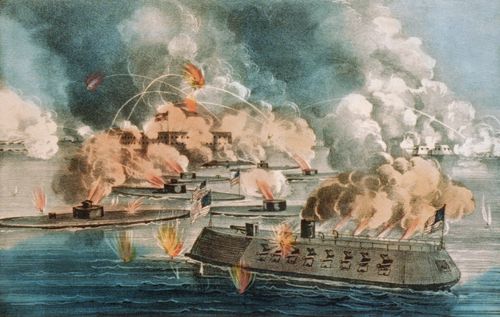 In 1861, the United States entered into a Civil War that would prove to be bloodier than any other conflict in American History — a war that would foreshadow the slaughter of the Western Front in World War and the global carnage of the 20th century. The number of soldiers who died between 1861 and 1865, generally estimated at 620,000, is approximately equal to the total of American fatalities in the American Revolution, the War of 1812, the Mexican-American War, the Spanish American War, World War I, World War II, and the Korean War, combined. The Civil War’srate of death, its incidence compared with the size of the American population, was six times that of World War II. A similar rate, about 2%, in the United States today, would mean six million fatalities.

The Confederate States of America struggled for survival against a wealthier and more populous enemy, and its death toll reflected the disproportionate strains on its human capital. Confederate men died at a rate three times that of their Yankee counterparts; one in five white southern men of military age did not survive the Civil War. Twice as many Civil War soldiers died from disease than they did from battle wounds, which resulted from poor sanitation in an era that did not yet understand the transmission of infectious diseases like typhoid, typhus, and dysentery.

These military statistics, however, tell only a part of the story. The war also killed a significant number of civilians; battles raged across farms and fields, encampments of troops spread epidemic disease, guerrillas ensnared women and children in violence and reprisals, draft rioters targeted innocent citizens, and shortages of food in parts of the South brought starvation. No one sought to document these deaths, and no one has devised a method of undertaking a retrospective count. Historians have estimated that there were 50,000 civilian deaths during the Civil War and have concluded that the overall mortality rate for the South exceeded that of any country in World War I and most of the regions in World War II.

The scale and duration of the war, the size of its battles, and the number of casualties were also unanticipated and unprecedented. In the South, nearly every household mourned some loved one who was lost, becoming almost commonplace. Both the Union and the Confederacy were unprepared for the sheer number of deaths — what to do with the bodies that covered the battlefields, how to mourn so many lost, how to remember, and how to understand. 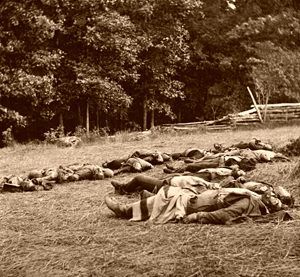 The most immediate of death’s challenges was a logistical one, the burial of soldiers in the battle’s aftermath. Armies were not ready for the enormity of the task that confronted them, particularly in the aftermath of engagements that left thousands of bodies carpeting battlegrounds like Antietam or Gettysburg. After a single day of fighting at Antietam, for example, 23,000 men and untold numbers of horses and mules lay killed or wounded. Neither side’s army had grave registration units; soldiers were not issued official badges of identification. There was no formal policy of notification for the families of those who had died, and neither side had an ambulance service.

Makeshift crews of soldiers who were detailed to dispose of the dead often lacked necessities such as carts or shovels. These failures were also made evident in the length of time it took to attend to casualties. A week after Antietam, a Union surgeon reported that “the dead were almost wholly unburied, and the stench arising from it was such as to breed a pestilence.” As a result, bodies were often thrown into unidentified mass trench graves.

In such circumstances, tens of thousands of soldiers died unknown, and tens of thousands of families were left without any consoling knowledge of their loved ones’ fates, circumstances of death, or place of burial. At least half of the Civil War dead were never identified. As the war continued, these realities became increasingly intolerable, and Americans worked in both official and informal ways to combat such dehumanization and loss. Soldiers endeavored to locate, inter, and honor slain comrades; merchants, created and marketed identity disks for soldiers; the men themselves pinned their scribbled names to their uniforms before especially dangerous encounters. 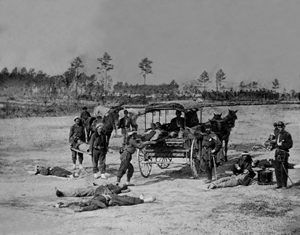 Ambulance Corps in the Civil War by William Brown

Voluntary organizations like the U.S. Sanitary Commission emerged and devoted their energies to compiling lists of killed and wounded from hundreds of Union hospitals, creating records of battlefield burials, and offering aid to families in locating the lost, for those with means, shipping embalmed bodies home. Families swarmed to battle sites in the aftermath of engagements to search for dead or wounded relatives, actively seeking information otherwise unavailable to them, hoping to fill what one northern observer called the “dread void of uncertainty.” Civilian mourning was difficult when the fate of missing soldiers remained uncertain, when bodies were not available for ritual burial, and when funerals occurred so frequently as to become commonplace.

As the bereaved found ways to mourn, the nation worked to give loss meaning. North and South governments recognized the necessity of assuming previously unacknowledged responsibility for the care of the dead. In 1862, the U.S. Congress passed a measure allocating to the President’s power to purchase grounds and “cause them to be securely enclosed, to be used as a National Cemetery for the soldiers who shall die in the service of the country.” Without any appropriation or formal policy to implement this legislative action, the War Department established cemeteries as emergency circumstances demanded, primarily near concentrations of military hospitals where many dead required burial. 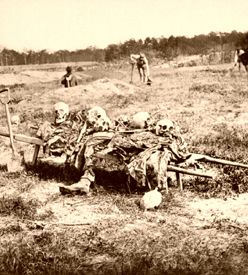 Collecting the remains of the dead in the Civil War, John Reekie, 1865

But, under the terms of this law, five cemeteries of a rather different character were created in the war. These were burial grounds for the dead of a particular battle, usually established when a lull in active operations made such an effort possible. Three of these cemeteries, Chattanooga, Stones River, and Knoxville, in Tennessee were created by Union Generals. Two, Antietam, Maryland and Gettysburg, Pennsylvania, by joint actions of northern states whose citizens had participated in the battles.

The end of combat in the spring of 1865 offered an opportunity to attend to the dead in ways that the war had made impossible. Moved by the same humanitarian purposes that had drawn her to nursing during the conflict, Clara Barton was among the first to take advantage of the cessation of battle, establishing an office of Missing Men of the United States Army in Washington, D.C. to serve as an information clearinghouse. By the time she closed its doors in 1868, she had received more than 68,000 letters and secured information about 22,000 soldiers.

Many of the missing soldiers of the Union Army lay in graves scattered across the South, often unmarked and unrecorded. In the fall of 1865, U.S. Quartermaster General Montgomery Meigs ordered an assessment of the condition and location of graves to ensure their protection, an increasingly urgent issue in the face of growing bitterness and defiance in the defeated South. Units of northern soldiers searched across the battlefronts of the war, searching for their slain comrades, inaugurating what became, over the next six years, a massive federally supported reburial program.

Ultimately, 303,536 Union soldiers were re-interred in 74 new National Cemeteries, and Congress officially established the National Cemetery system. Careful attention to the content of graves and to the documentation that poured in from families and former comrades permitted the identification of 54% of the reburied soldiers. Some 30,000 of the re-interred were black soldiers. Just as they were segregated into the U.S. Colored Troops in life, so in death, they were buried in areas designated “colored.”

This federal effort included only Union soldiers. Outraged at the official neglect of their dead, white southern civilians, largely women, mobilized private means to accomplish what federal resources would not. For example, in Petersburg, Virginia, the Ladies Memorial Association oversaw the re-interment of 30,000 dead Confederates in the city’s Blanford Cemetery.

Recognized today as a national holiday to honor all Americans who have died while in military service, this holiday started as “Decoration Day.” Its origins can be traced back to as early as June of 1861 where a claim is made that Civil War soldier’s graves were decorated in Warrenton, Virginia. There is also documentation showing women in Savannah, Georgia decorating Confederate graves in 1862.  Boalsburg, Pennsylvania claims to be Memorial Day’s birthplace due to women decorating soldiers’ graves on July 4, 1864, at the National Cemetery in Gettysburg.

However, the first widely recognized observance of “Decoration Day” came just after the war ended on May 1, 1865. Black residents of Charleston, South Carolina, and teachers and missionaries, organized an event to honor 257 Union prisoners who had died while being held at the Charleston Race Course. Almost 10,000 people showed up for the event, most laying flowers on the burial field, now Hampton Park.  Years later, it would be labeled as the “First Decoration Day” in the North. Other observances were held throughout the North and South over the next decades, with the term “Memorial Day” first being used in 1882.  That term would not become common until after World War II.

Memorial Day would not become an official Federal Holiday until 1967. In June of 1968, the United States Congress passed the Uniform Monday Holiday Act, which moved the observance to a specific Monday to create a convenient three-day weekend.  The change moved it from its traditional May 30 date to the last Monday in May. The Holiday Act became law in 1971. 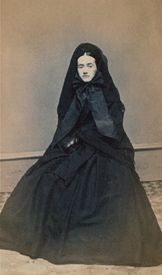 The Civil War made hundreds of thousands of women widows.

Today, Memorial Day continues to honor those who have fallen in service of their country with solemn observances mixed with family gatherings to kick off the Summer season.  The traditional observance is to raise the U.S. Flag to the top of the staff, then slowly lower it to the morning’s half-staff position. This is to remember the million or more men or women who have died in service.  Then at Noon, the flag is raised to full-staff for the rest of the day to raise their memory by the living, who resolve that they have not died in vain.