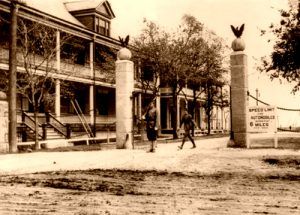 Fort Sam Houston, encompassing an area of land just north of downtown San Antonio, Texas is one of the oldest posts in the U.S. Army

The U.S. Army has maintained a presence in the Alamo City since 1845. During that time, the installation has performed five distinct and important roles: that of a headquarters, logistical base, mobilization and training site, garrison and provider of medical support.

At first, the Army leased facilities in the San Antonio, including the Alamo. In fact, the Army repaired the Alamo structure and added a roof so it could be used as a headquarters. However, in the 1870’s the construction of Fort Sam Houston began under the supervision of the military commander of the Department of Texas, Major General Edward Ord, a West Point-trained army engineer. 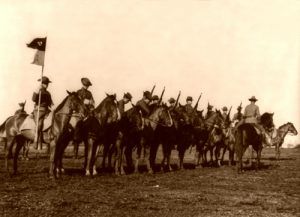 From 1910 until World War II, Fort Sam Houston was the largest Army post in the continental United States. Many of the most distinguished American soldiers have served here, including no less than 13 Army Chiefs of Staff and two United States presidents.

The post’s prominence led to significant tactical and organizational innovations. Military aviation was born here in 1910 and revitalized during the 1940s and 1950s. Large-scale troop maneuvers have been conducted, including the first effective use of the Command Post Exercise in 1911. Field exercises in the 1930s developed the Triangular Division. This streamlined, mobile organization was the foundation of the Army combat power in World War II. The delivery of troops to the battlefield by air also was tested here in 1939-41. Aeromedical evacuation of casualties was first developed here as early as 1917.
At the end of the Second World War, the Army decided to make Fort Sam Houston the principal medical training facility. In conjunction with this decision, came the determination to develop Brooke General Hospital into one of the Army’s premier medical centers. Today, Fort Sam Houston is the largest and most important military medical training facility in the world.

Throughout its existence, a close and harmonious relationship has prevailed between Fort Sam Houston and the City of San Antonio. The two have grown and matured together. The city often has been called the “mother-in-law of the Army” because so many soldiers including Dwight D. Eisenhower, met their future spouses here. 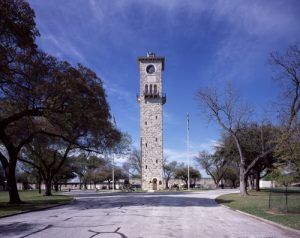 The post has since increased in size from its original 92 acres donated to the Army by the city, to approximately 3,000 acres today. A continuously growing installation, the fort has taken on new missions such as the home of the Army Medical Command headquarters, in addition to command headquarters such as Fifth U.S. Army, U.S. Army South, Fifth Recruiting Brigade, 12th ROTC Brigade, U.S. Navy Regional Recruiting, the San Antonio Military Entrance and Processing Station, and the U.S. Naval School of Health Sciences, Bethesda Detachment.

More than 27,000 military and civilian personnel work at the post, with an annual payroll and operating budget of $1.9 billion. Local purchases made by installation activities total almost $105 million annually. Funding for construction projects on post average $30 million annually.

The significant contributions of Fort Sam Houston to the United States were recognized in 1975 when the post was designated as a National Historic Landmark. As one of the Army’s oldest installations, Fort Sam Houston boasts the largest collection of historic structures — more than 900 buildings. 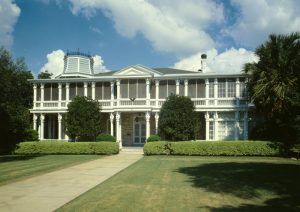 Even more consequential than the numbers is the historical integrity of the post’s different sections which represent different eras of construction and reflect Army concepts in planning and design. Careful preservation of these areas allows the post to live with its history, surrounded by the existence of the traditions of excellence established when the first soldier arrived here in 1845.

Because Fort Sam Houston is still an extremely active base, the vast majority of its historic buildings

are still in use and thus off-limits; however, the historic fort still provides a wealth of information and photograph opportunities. The oldest building on the base, the Quadrangle, an impressive 1876 limestone structure, is centered on a brick clock tower and encloses a grassy square where peacocks and deer roam freely.

Apache Chief Geronimo was held captive here for 40 days in 1886. The building was originally a supply depot and housed Geronimo and his Apaches when they were captured. Though the Quadrangle is used as an office complex which houses the commanding general and staff of U.S. Army North, it is open to the public.

The complex is located at Grayson St. and New Braunfels Avenue, about 2 ½ miles northeast of downtown. Because it is an active military installation, visitors must enter through the Walters Gate (take the Walters St. exit off I-35) and present a driver’s license. 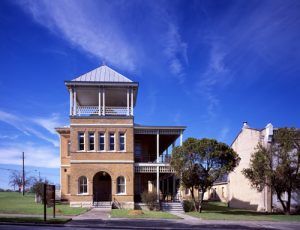 The Band Buiding is just one of some 900 historic buildings at Fort Sam Houston, photo by Carol M.Highsmith.

Compiled and edited by Kathy Weiser/Legends of America, updated May 2019