Current maps do not include old Route 66. The last stretch of the road disappeared from “official” maps in 1985.

A famous national museum, nowhere near Route 66, has an exhibit that includes an actual piece of Route 66 pavement. Entitled “America On the Move,” the piece of the Mother Road is at the Smithsonian’s National Museum in Washington, D.C.

According to most sources, Route 66 is 2448 miles long (about 4000 km). However, this is a rough approximation as the road has had many different alignments through the years.

Route 66 was commissioned on November 11, 1926, picking up as many bits and pieces of the existing road as possible.

Because of a change in the alignment of Route 66 in 1937, there is an intersection where Route 66 crosses itself at Central Avenue and 4th Street in downtown Albuquerque, New Mexico. Here, you can stand on the corner of Route 66 and Route 66. 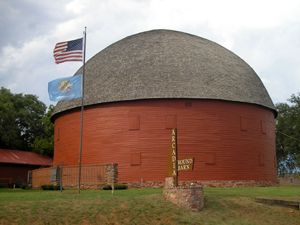 The Round Barn in Arcadia, Oklahoma, is one of the most photographed sites on the Mother Road by Kathy Alexander.

The old round barn in Arcadia, Oklahoma, is the most famous and most often photographed barn on Route 66.

The numerical designation 66 was officially assigned to the Chicago-to-Los Angeles route in the summer of 1926.

Route 66 starts in Chicago, Illinois, and ends in Santa Monica, California. The Corvette has become a Route 66 icon.

On the corner of Route 66 and First Street in Tucumcari, New Mexico, is a Texaco Station that is the only service station to have operated continuously through the Route 66 era to the present.

Kansas has the shortest section of the Mother Road, with only 13 miles. However, three historic Route 66 towns are located on this short segment, including Baxter Springs, Galena, and Riverton.

As a publicity stunt in 1928, promoters of Route 66 held a coast-to-coast foot race that included all 2448 miles of the Mother Road and then some. The race kept right on going far beyond Chicago to New York City.

In 1985 Route 66 was officially decommissioned as a federal highway. However, the Interstates gradually replaced the daily use of the road in earlier years. The road was decommissioned due to public demand for better transportation as the old road deteriorated after World War II.

Route 66 is also known as “Mother Road,” “The Main Street of America,” and “The Will Rogers Highway.” 85% of the road is still drivable.

Well it winds from Chicago to L.A.
More than 2000 miles all the way
Get your kicks on Route 66

Would you get hip to this kindly tip
And go take that California trip
Get your kicks on Route 66!

Bobby Troup wrote the song, Get Your Kicks on Route 66 in 1946. It has been performed and remixed by several musicians, including Nat King Cole, who first recorded it in 1946, scoring a major hit with the Rolling Stones and Depeche Mode.

During all of its life, Route 66 continued to evolve, leaving many abandoned stretches of concrete still waiting to be found by the more adventurous traveler. Cyrus Stevens Avery from Tulsa, Oklahoma, can be called the father of Route 66. Mr.  Avery lived in Tulsa. Conveniently, the new highway ran past his own filling station and restaurant. Elvis Presley used to like staying at the Best Western Trade Winds Motel in Clinton, Oklahoma.   Lou Mitchell’s Café has been providing breakfast for those beginning the long journey on Route 66 since the beginning. Opened in 1923 at 565 W. Jackson, breakfast is still served all day at Lou Mitchell’s in Chicago.

Most of the road was replaced by five interstate highways, including I-55, I-44, I-40, I-15, and I-10, but still, a surprisingly high amount of old road is waiting to be found by the more adventurous traveler.

When is a corn dog not a corn dog? When you’re at the Cozy Dog Drive along Route 66 in Springfield, Illinois. Ed Waldmire introduced this first fast food of the road at the 1946 Illinois State Fair. In 1950, he opened the Cozy Dog Drive Inn. This Mother Road icon still stands today at 2935 So. Sixth Street in Springfield, Illinois, but when you go try their “Cozy Dog,” don’t call it a corn dog, or you might be met with little more than a steely-eyed stare.

You cannot count on the road to be marked with road signs. Though some states and organizations have posted signs, these often disappear with souvenir hunters. Others are simply never posted. Driving the route from west to east is historically wrong and a lot harder, as all available documentation goes the “right” way. John Steinbeck, in his novel, Grapes of Wrath, published in 1939, was the first to refer to Route 66 as the “Mother Road.” Old Route 66 originally began in Chicago at Michigan Avenue and Jackson Boulevard. After the 1933 World’s Fair, the road’s terminus was moved to Lake Shore Drive at the entrance to Grant Park.

George Maharis and Martin Milner were the stars of the CBS television series Route 66, which debuted on October 7, 1960. The stars drove brand new baby-blue Corvettes in the show, though the audience wouldn’t know that because the show was in black and white. The show lasted for 116 episodes, ending on March 13, 1964. Ironically, the show was filmed in locations all around the USA but rarely near the real Route 66. 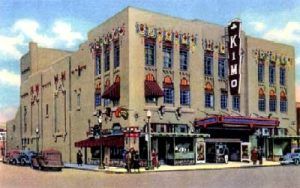 The famous KiMo Theater in Albuquerque, New Mexico, is said to be haunted by the ghost of a six-year-old boy by the name of Bobby Darnall, who was killed at the theater in 1951 from a boiler explosion. According to legend, the impish spirit causes the performers problems by tripping them and creating a ruckus during performances. To appease the spirit, the cast leaves doughnuts backstage, which are gone the next morning.

The oldest hotel on Route 66 is the Eagle Hotel in Wilmington, Illinois. Though sitting empty today, the 1836 hotel that once serviced stagecoach travelers has plans for restoration.

The first McDonald’s restaurant was located in San Bernardino, California 1945, on the Mother Road. The site is currently home to the McDonald’s Route 66 Museum.

Adrian, Texas, is said to be the “geo-mathematical” center of Route 66. However, many argue that this claim is actually in Vega, Texas. They’re probably both right depending upon which alignment a traveler might have taken.

Route 66 does not end along 6th Street in Amarillo, Texas, Kathy Weiser-Alexander.  (The sign is no longer there)

You can own or adopt a stretch of old Route 66.

Arizona has the longest stretch of the historic highway still in use today.

Quapaw, Oklahoma, the first town on the Mother Road in Oklahoma, is famous for “spook lights”, bouncing bright balls of white fire that have been reported as far back as the 1700s.

The Chain of Rocks Bridge in St. Louis was used in filming the 1981 movie “Escape From New York.” The bridge was repaved for John Carpenter’s film and appears at the movie’s end when Kurt Russell rescues Donald Pleasance from certain doom. Though closed to vehicle traffic today, the Chain of Rocks Bridge remains open as the world’s longest pedestrian and bicycle bridge.