Vega, Texas, the county seat of Oldham County, is a Route 66 town of about 900 people. 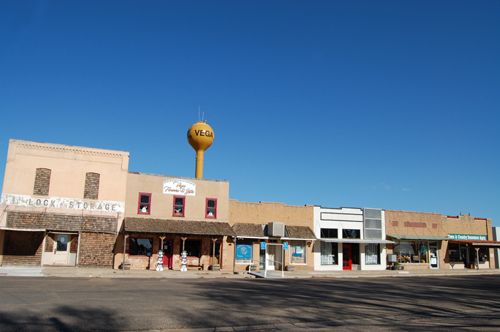 In 1879 this area of the Texas Panhandle was opened up for homesteading but, the first settler did not arrive until the fall of 1899. N.J. Whitfield purchased the future townsite for $1.00 per acre and in 1903 sold a 100-foot strip across Oldham County to the Choctaw, Oklahoma, and Texas (later the Rock Island) Railroad as a right-of-way. Sitting in a vast prairie, the town was named Vega, a Spanish word for a large grassy plain or valley. In the same year, the townsite was surveyed and the first store was opened by A.M. Miller.

In 1904, Vega saw the arrival of a post office, the ever-present saloon, and a school, which doubled as a Masonic Lodge.

In 1907, ranching brothers Pat and John Landergin purchased part of the LS Ranch, bringing in more settlers to the community. The next year the Landergins established a bank and when the railroad was completed in 1908, the town added a number of stores, two churches, a hotel, and a blacksmith shop. Coming into its own, a newspaper called the Vega Sentinel was founded in March 1909. Continuing to thrive, the Vega Sentinel proclaimed in 1914 of Vega:

HOME OF OPPORTUNITY — VEGA HAS THE FOLLOWING BUSINESS PLACES

Grandest Hotels in the County

Only Printing Office in County 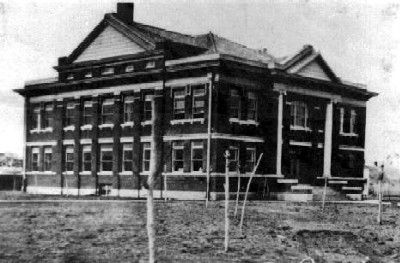 In 1915 Vega won a five-year battle with the nearby town of Tascosa for the rights of County Seat. The county business was, at first, conducted in the Oldham Hotel until a permanent courthouse could be built. It wasn’t until 1927 that the town finally incorporated. Just a few years later, on May 3, 1931, a fire leveled six of its downtown buildings west of the courthouse square. Unfortunately, another fire just two months later destroyed two more businesses north of the square and Vega got busy with establishing a formal water system within the town.

When Route 66 arrived, Vega began to really develop with tourist courts, gas stations, shops and services for the many travelers of the Mother Road.

Today, this small farm and ranching community of just under 1000 residents, continues to cater to travelers with several motels and great eating establishments. A drive down old Route 66 provides plenty of photo opportunities as you view the former glory of the Mother Road. Be sure to check out the old Magnolia Gas Station, which has now been restored by the City of Vega with the help of the National Parks Service Route 66 Corridor Preservation Program. Dating back to the early 1920s, it was the second service station built in the small town. Today, it provides a great picnic spot, a glimpse into simpler times, and wonderful photo opportunities. 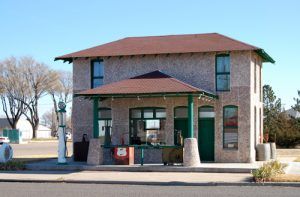 Today, the old Magnolia Station has been fully restored by Kathy Weiser-Alexander.

Just across the street from the old Magnolia Station is the Roark Hardware Store — the oldest operating hardware store on the Mother Road. A stop in here will make you feel as if you’re walking into a past time zone as you view a wide variety of farming implements, household supplies, gifts, and toys.

Just north of the old Magnolia Station is the Oldham County Courthouse at Main and US Highway 385. This 1915 building continues to serve as the county courthouse today. Over the years, a few changes have been made to the historic building including the removal of the original hipped roof in 1967, an addition to the north side, and an attached jail on the south side.

In earlier days, an unpaved Route 66 ran north of the old railroad grade from Vega to Adrian. Though, this old dirt road continues for a bit; it is no longer passable all the way. However, as you travel westward to Adrian, watch to the north for several peeks at lonely old concrete bridges still standing on the grassy prairie. 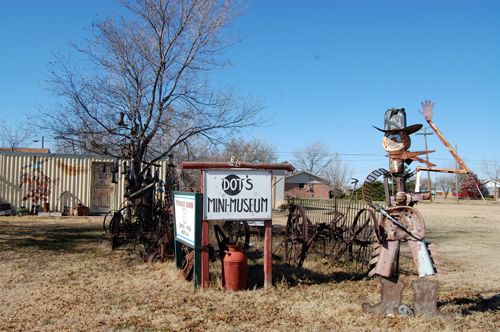 Just to the north of where Old Route 66 ends, at the corner of West Main Street and 12th Street, is Dot’s Mini-Museum. Once upon a time, this old homestead served as a business when Harold and Dot Levitt established the Vega Zero Lockers here in 1944. Back in those days, most folks didn’t have freezers, and the business provided “freezer lockers” for rent. As Route 66 travelers passed through, they could stop here to pick up fresh fruits, meats, vegetables, and canned goods to take along with them on their journey.

As Vega moved into the future and the small town was bypassed by the interstate, Zero Lockers went out of business. But, Dot opened a small museum that featured an eclectic collection gathered from decades of working on the Mother Road. For years, people stopped to take a look at western artifacts, memorabilia from the heyday of Route 66, dolls, antiques, and an endless array of “amazements.” Sadly, Dot has passed away, but her daughter, Betty Carpenter, continues to maintain the tiny museum. She’s also added to the collection a cowboy mini-museum, an Avon Bottle collection, yard-art and a couple of items that land the museum on our Quirky Texas category, including a “boot tree” and a tombstone for the Oldham County News, which evidently died on March 4, 1922.

Return south to Vega Boulevard (I-40 Business Loop) where several vintage views of a more prosperous Route 66 can still be seen including an old Texaco Station east of the Bonanza Motel and the old Road Runner Drive-Inn across from the Vega Motel. The vintage Hickory Inn at 1004 Vega Boulevard still serves up some not so fancy, but good food, to Route 66 travelers and locals alike.

Route 66 continues westward along the north frontage road of I-40 to Adrian, Texas.