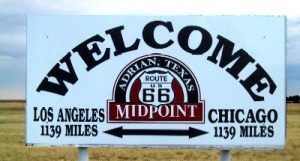 Adrian, Texas began in 1900 when the Rock Island Railroad established a station in Oldham County. Calvin G. Aten, a former Texas Ranger, first built a dugout for his family west of the townsite. The town gained official status in the summer of 1909 when the railway was completed through that portion of Oldham County and was named for an early farmer by the name of Adrian Cullen. Promotion by an Iowa based Townsite Company quickly attracted prospective farmers and businessmen.

By 1910, Adrian had a post office, a school, a general store, a bank, a blacksmith shop, a pool hall, a lumberyard, a brick factory, and a newspaper called the Adrian Eagle. Just five years later the settlement had added two churches, a drugstore, and telephone service. The Giles Hotel was a famous landmark of early Adrian, which later became the Adrian Mercantile and the Adrian Community Center.

Though populated with businesses, Adrian’s early years saw slow growth in population due to severe droughts and difficulties in maintaining sufficient water supplies. But, Adrian survived to become the midpoint of Route 66 between Chicago and Los Angeles, a popular stopping place for Mother Road travelers.

Vintage picture of the Giles Hotel in Adrian, Texas 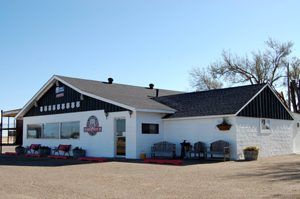 One of the most popular stops in Adrian was, and still is, the Midpoint Café which was first constructed in 1928, a full ten years before paving of Route 66 was completed through Oldham County. The original greasy spoon was known as “Zella’s,” which was a one-room eatery with a dirt floor. Later the café was sold to Dub Edmonds and Jess Fincher, who moved into a modernized building next door and changed its name to “Jesse’s Café.” Though it has changed hands many times over the years, it is one of the few businesses still alive and kicking in Adrian. The town was not incorporated until 1953 and never maintained a population of more than a few hundred.

Today, Adrian is home to just twelve businesses and a little over 150 people. The Midpoint Café remains open and provides a collection of Route 66 memorabilia in the original site of Zelda’s just next door. The oldest continuously operating café on the Texas Mother Road, the café’s name has changed over the years, but the service has remained the same where home-style cooking is served with a smile.

While you’re in Adrian, take a look at the many old buildings that line its main street including the Bent Door Trading Post, once a lively tourist stop that has long since fallen into disrepair. Also visit The Antique Ranch, which has converted an old mechanic’s shop into an antique store and eatery where you can feast on real Texas barbeque. And, don’t forget to check out the Mid-Point Water Tower. 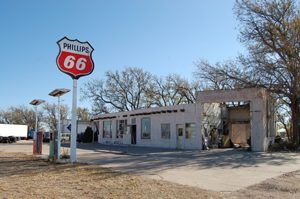 The Bent Door Trading Post is just a shell of its former self by Kathy Weiser-Alexander. 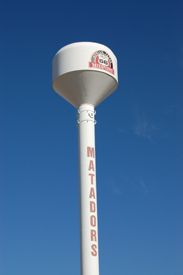 Beyond Adrian, you will continue on the old road for just a few short miles before rejoining I-40 until you reach the Glenrio exit at the New Mexico border.