The KiMo Theatre, a Pueblo Deco picture palace, was opened on September 19, 1927, by Oreste Bachechi. Bachechi, a motivated entrepreneur from humble origins, who came to the United States in 1885. Winding up in Albuquerque, New Mexico, he soon set up a business in a tent near the railroad tracks. As the city expanded, so did Bachchie’s business, as he became a liquor dealer and proprietor of a grocery store. His wife Maria ran a dry goods store in the Elms Hotel. As his fortunes expanded, he began the Bachechi Amusement Association in 1919, which operated the Pastime Theatre with Joe Barnett.

In 1925, Oreste decided to achieve his true dream – building his own theatre. Envisioning a unique southwestern style, he soon hired an architect to design it, winding up with the Pueblo Deco style. This architectural style was a flamboyant, short-lived fashion that fused the spirit of the Native American cultures with Art deco.

Built for $150,000, the theatre opened on September 19, 1927, when silent movies were the all-consuming rage of Americans. A contest was run to name the new theatre, and Pablo Abeita won the magnificent prize of $50 for the unique name of “KiMo.” KiMo is a combination of two Indian words literally meaning “mountain lion” but more liberally interpreted as “king of its kind.”

Just one year after realizing his dream, Oreste Bachechi died, leaving the management of the KiMo to his sons, who soon combined Vaudeville and out-of-town roadshows with movies. Over the years, the KiMo featured such stars as Vivian Vance, Gloria Swanson, Tom Mix, Ginger Rogers, and many others.

No institution stands through time without something bad happening, and the KiMo is no exception. In 1951, a six-year-old boy named Bobby Darnall was killed when the boiler in the basement exploded, demolishing part of the original lobby. The boiler was located right beneath the concession stand in the lobby. Bobby, who had been sitting in the theatre balcony with some of his friends, suddenly was frightened by something on the screen and ran down the staircase to the lobby. Just as he arrived, the boiler exploded, taking Bobby and part of the lobby in its wake of destruction. The spirit of little Bobby is said to continue to haunt the KiMo Theatre today. 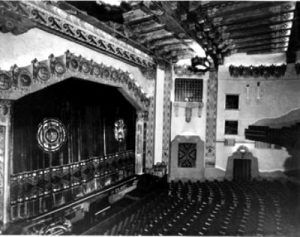 Another tragedy occurred at the KiMo when in 1963, a fire destroyed the original 1927 stage and damaged much of the rest of the building.

Soon after, like many American cities, Albuquerque experienced a mass exodus from downtown, and the beautiful KiMo Theatre began to fall into disrepair.

Slated for the wrecking ball, the KiMo was saved in 1977 when the citizens of Albuquerque voted to purchase the beautiful building. Since then, several stages of restoration have returned the theatre to its former glory. The KiMo Theater now serves as a performing arts center with seating for 700 and is on the National Register of Historic Places.

But what of its ghosts? Not only is the old theatre home to poor Bobby Darnell, who died in the 1951 explosion, but also to a mysterious lady who is seen walking along the hallways.

This unknown woman, wearing a bonnet, has often been reported walking down the theatre halls, appearing to be just going about her business. Nothing more is known of this ghostly presence, but seemingly she doesn’t disturb anyone; she just likes strolling about the old theatre.

However, Bobby is a much more prevalent force and has been known to play all kinds of impish tricks upon staff and guests of the old theatre. Often seen playing on the lobby staircase, Bobby wears a striped shirt and blue jeans.

According to legend, the playful spirit causes the performers problems by tripping them and creating a ruckus during performances. To appease the spirit, the cast hangs doughnuts on the water pipe that runs along the theatre’s back wall behind the stage. Often, the treats are gone the next morning. Of those left, bite marks made by a little mouth can sometimes be seen. 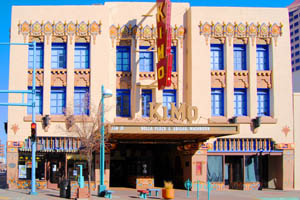 One year, a crew preparing for a Christmas production took down the stale doughnuts. Big mistake. No sooner were the doughnuts removed when the technical rehearsal started to become a disaster, with everything going wrong, from lighting to sound problems and more. When the treats were replaced, things began to run smoothly again.