The first white man to set foot in what would one day become Santa Monica, California, was Gaspar de Portolá and his men who were exploring the area. Portola was a Spanish military officer who was tasked with extending Spain’s control up the Pacific Coast and establishing colonies and missions. On August 3, 1769, the party camped near present-day Wilshire Boulevard. 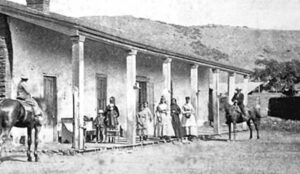 Before long, the area began to be filled with large ranchos held by prominent and wealthy families. In 1874, Nevada Senator John P. Jones decided to develop a city and purchased almost 10,000 acres. The following year, he began to sell lots, and Santa Monica was founded on the original Don Francisco Sepulveda land grant.

Two stories attest to how the town was named, the first indicating the town was named in honor of the feast day of Santa Monica. The second tale states that a dripping spring in the area reminded early residents of the Saint’s tears.

In 1886, the town residents voted to incorporate Santa Monica, and the first town hall was housed in a modest brick building, which later became a saloon. Today, the building continues to stand as part of the Santa Monica Hostel.

In 1884, a parcel of 100 acres in the southwestern section of the city was purchased by W.D. Vawter for a subdivision. Abbot Kinney acquired the coastal strip portion and named the area Ocean Park in 1895. It became his first amusement park and residential project. A race track and golf course were soon built in the area. Later, Kinney focused on the south end of the property, which he made into Venice of America, now Venice, California.

When the Southern Pacific Railroad arrived in Los Angeles, a controversy erupted over where to locate the seaport. The railroad preferred Santa Monica, while others advocated for San Pedro Bay. The Long Wharf was built in 1893 at the north end of the city, accommodating large ships, and was dubbed Port Los Angeles. However, San Pedro Bay, now known as the Port of Los Angeles, was selected by the US Congress in 1897. Jones and other property owners were disappointed in the selection; however, it allowed Santa Monica to maintain its scenic charm. The rail line down to Santa Monica Canyon was sold to the Pacific Electric Railroad and was in use from 1891 to 1933.

Donald W. Douglas founded the Douglas Aircraft Company in 1921, with his first plant on Wilshire Boulevard.  Another plant was built the following year at Clover Field (Santa Monica Airport), which was in use for 46 years. Four Douglas-built planes took off from Clover Field to attempt the first aerial circumnavigation of the world. Two planes made it back after having covered 27,553 miles in 175 days and were greeted on their return on September 23, 1924, by a crowd of generously estimated at 200,000. The Douglas Company (later McDonnell Douglas) kept facilities in the city until the 1960s. 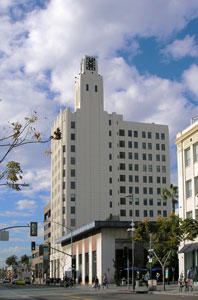 The nationwide prosperity of the 1920s was felt in Santa Monica. The population increased from 15,000 to 32,000 at the end of the decade. Downtown saw a construction boom with many important buildings, such as Henshey’s Department Store (destroyed) and the Criterion Theater. Elegant resorts were opened, including the 1925 Miramar Hotel and the 1926 Club Casa del Mar. Stiles O. Clements designed the art deco Bay City Building, a 13-story skyscraper topped with a huge four-faced clock that was finished in 1930.

La Monica Ballroom opened in 1924 on the Santa Monica Pier, capable of holding 10,000 dancers in its over 15,000 square foot area. A major storm in 1926 almost destroyed the pier and the ballroom, necessitating major repairs. La Monica hosted many national radio and television broadcasts in the early days of networks before it was turned into a skating rink in 1958. The largest skating rink in Southern California, if not the entire state, entertained thousands of skaters for the next five years. However, in 1963, the building suffered so much structural damage that it had to be torn down.

Comedian Will Rogers bought a substantial ranch in Santa Monica Canyon in 1922. Among his improvements was a polo field where he played with friends Spencer Tracy, Walt Disney, and Robert Montgomery. Upon his untimely death, it was discovered that he had generously deeded to the public the ranch now known as Will Rogers State Historic Park, Will Rogers State Park, and Will Rogers State Beach.

In the 1930s, corruption infected Santa Monica, along with neighboring Los Angeles. In 1928, gambling ships started anchoring in Santa Monica Bay just beyond the three-mile limit. Water taxis ferried patrons from Santa Monica and Venice. The largest such ship, the S.S. Rex launched in 1938, could hold up to 3,000 gamblers at a time. The Rex was a red flag to anti-gambling interests. After state Attorney General Earl Warren got a court order to shut the ships down as a nuisance, the crew of the Rex initially fought off police by using water cannons and brandishing submachine guns. The engine-less ship surrendered after nine days in what newspapers called The Battle of Santa Monica Bay. Its owner, Tony Cornero, went on to build the Stardust casino in Las Vegas, Nevada. 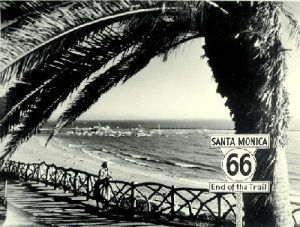 The 3,000-seat Santa Monica Civic Auditorium, designed in the international style by Welton Becket, opened in 1958. From 1961 to 1968, the Academy of Motion Picture Arts and Sciences held its annual Oscar awards ceremony there. Since the late 1980s, the auditorium has been more popular for trade conventions than performances.

Pacific Ocean Park, the last of the great amusement piers, opened in 1958. While it temporarily eclipsed competitor Disneyland, attendance later plummeted, and by 1967 the park was foreclosed for back taxes. It sat empty and rotting, an unattractive “attractive nuisance” until finally removed in 1974.

The Douglas plant closed in 1968, depriving Santa Monica of its largest employer. A decade passed before the site was redeveloped into an office park. The Museum of Flying was opened on the same site another decade later, in 1989.

Today, this city of over 91,000 people has revitalized its downtown core, increasing tourism, and continues to be a resort-like area, much the same as it has for almost a century.

While in Santa Monica, several attractions present themselves, most notably the Santa Monica Pier, complete with its beautiful sunrises and sunsets. In addition, its quaint downtown district provides several interesting shops and boutiques and several old theaters and museums. 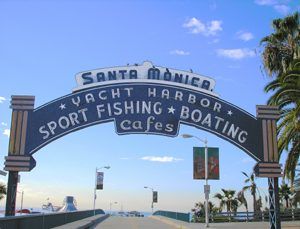