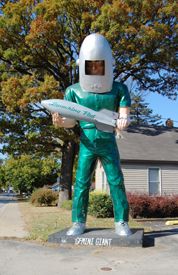 Wilmington, Illinois calls itself home to a little more than 5,000 people, but it’s most photographed “citizen” isn’t a person at all. Rather it is the Gemini Giant, a large fiberglass “muffler man” of the 1960s era. It was during this time that these colossal men could be found all over America, holding all manner of “tools” in their hands from mufflers, to hot dogs, to axes, and more. In this case, the Gemini Giant sports a rocket ship, a remnant of our fascination with outer space. Most of these very tall men lost their lives as America began to move faster and faster. But here in Wilmington, the large green man hangs tight, along with several other historic icons of the past.

Wilmington was born when, in 1834, Thomas Cox acquired 400 acres of land from the government and built a sawmill. He later added a corn cracker, a gristmill, and a carding machine and the enterprise took on the name Cox’s Mills. Patronized by settlers from as far 50 miles away, pioneers brought their corn and wheat to Wilmington to be ground.

In the spring of 1836, the enterprising Mr. Cox laid out the town of Winchester and began to sell lots. One such home, built of stone by Daniel McIntosh near Forked Creek, still stands today just south of Route 66. Another building built during this first year also stands – that of the Eagle Hotel, which also became a stage stop. Later it would be used as part of the Underground Railroad in the days before the Civil War. 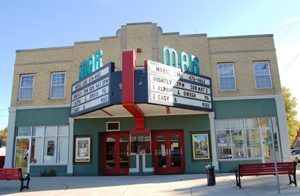 The Mar Theater in Wilmington has been doing business since 1937. Photo by Kathy Weiser-Alexander.

In 1837 a post office was established in the new community and church services were held in Peter Stewart’s barn. A year later the town’s name was changed to Wilmington. Before long other entrepreneurs laid out new additions, a man named Elias Brown opened another hotel, and Henry Brown opened a new store.

In 1839 a public school was established and, soon after, a small school building was erected. The next year saw the building of the town’s first church.

When the Chicago and Alton Railroad pushed through town on July 4, 1854, it brought with it, added prosperity to the city. In no time at all, land prices increased three-fold and Wilmington was incorporated as a village.

Later many of the family homes in the area became depots for the Underground Railroad prior to and during the Civil War. Fugitives were hidden in attics, barns, woodpiles, haystacks, or anywhere else that they might remain undetected.

The 1870s saw several manufacturing facilities built in the burgeoning town including a flour mill, butter and cheese factory, and a paper mill.

By the time Route 66 pushed through, Wilmington responded with services for the many travelers of the Mother Road. The Eagle Hotel, having served the stagecoaches of the past, now served those traveling on the new trail to the west. In 1937, the Mar Theatre opened at 121 S. Main Street containing 500 seats.

The Dairy Delight would open in the late 1950s by John and Bernice Korelc at 810 E. Baltimore St. In 1965 they expanded the business and renamed it the Launching Pad. That same year, John Korelc saw one of the famous Muffler Men during a restaurant convention and decided to put one out front, giving it his own twist by making it look like an astronaut. Naming it the “Gemini Giant”, after the Gemini space program, the icon would become one of the most photographed on the Mother Road, and, along with the restaurant, was inducted into the Illinois Route 66 Hall of Fame in 2000. Korelc retired in 1986 and the business was kept alive under Jerry and Sharon Gatties until 2007, but after the property was bought by Morey Szczecin it struggled and finally closed in 2013.  Fortunately, the property was sold in October of 2017 to Tully Garrett and Holly Barker, who re-launched the Launching pad in the Spring of 2018. 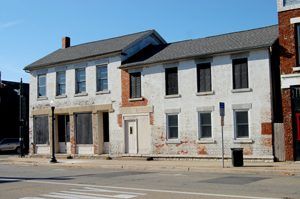 The Eagle Hotel fell into serious disrepair by the late 20th century and the City of Wilmington at one time considered demolition. This old hotel is the oldest on all of Route 66, first catering to riverboat and stagecoach travelers when it was built in 1836. After some years of struggling the building was converted into a boarding house, then apartments in the 1940s. It was converted into the Wilmington Area Historical Society museum in 1982.  Badly damaged by fire in 1990, the museum was forced to move and the future of the building was in serious doubt. But the Route 66 Corridor Preservation Program, and other preservationists, managed to keep the building from the wrecking ball. The old hotel was listed on the National Register of Historic Places in 1994 and, as far as we know, still sits empty 100 Water Street. 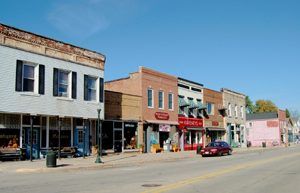 It appears that all of Wilmington is dedicated to preservation as you cruise through this pretty little town with its historic buildings and dedication to the past. Be sure to visit its many antique stores in the historic downtown area.

Another opportunity for wildlife adventurers is the Mildewin National Tallgrass Prairie. Created from more than 19,000 acres and once used by the U. S. Army as the Joliet Arsenal, the land has been returned to the U.S. Department of Agriculture Forest Service to conserve the environment and wildlife. Today it provides numerous hiking trails, wildlife views, and limited hunting opportunities on this land being returned to Mother Nature.

Having had a fine time in Wilmington, head on down Route 66 through the old coal mining communities of Braidwood, Braceville, and Gardner.

Back to Route 66 Main Page