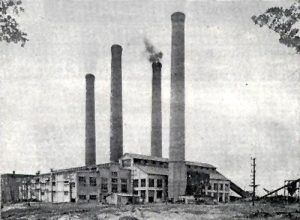 Just three miles down the road from Galena, the tiny town of Rivertonsprang up during the Kansas Mining heydays. In the beginning, it was an early Quaker settlement. But shortly after the turn of the century, the Empire District Electric Company dammed Shoal Creek just south of the Spring River to construct a hydroelectric plant at Riverton. The facility generated enough electricity to illuminate 80 communities and mining operations throughout the surrounding tri-state area. The dam also created the recreational Lake Lowell. The power plant, which still operates today, is the only major business in this small Route 66 town.

There was a time when the Route 66 traveler, after leaving Galena and heading west towards Riverton, would have crossed the Spring River on a classic old Marsh Rainbow Arch Bridge. This beautiful bridge, with three consecutive spans, was built in 1922 and saw service throughout the entire period of Route 66. Unfortunately, it was dismantled in 1986.

Also between Galena and Riverton was once a popular motor court and gas station called Camp Joy. However, by the 1960s, Camp Joy had all but disappeared.

Just after crossing the Spring River, The Spring River Inn and a country club were constructed on the grounds of the electric plant north of Lake Lowell. Built in 1905, the Inn and country club first catered to the wealthy patrons from Galena and became the area’s social center. However, when the depression hit, the club was sold in 1932 and was used as a boating club. 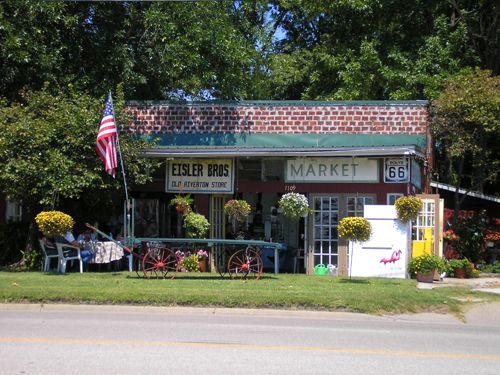 Reopening in 1952, the restaurant and inn catered to the many travelers of the Mother Road. The restaurant was known for its 35-foot buffet table loaded with home-cooked food, cinnamon pull-apart rolls, and squaw bread. In the mid-1990s, the Inn and restaurant closed, and a couple of years later, the Inn burned to the ground. The restaurant has never reopened.

The biggest attraction is the old Eisler Brother Store, built in 1925. A one-of-a-kind landmark, the store was originally a Standard Station. By 1932, a “Y Not Eat Barbecue” had been added. The Eisler family bought the location in 1973 and opened a market and deli. The old building is well maintained and still contains the original pressed tin ceiling. Be sure to stop here where you can see a variety of Route 66 souvenirs and enjoy an old-fashioned deli sandwich while watching the Mother Road travelers by the store’s front porch. 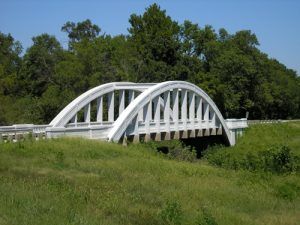 Continuing west through Riverton at the 66 Junction with 69 Alternate & U.S. 400, you will soon come upon the Marsh Arch Bridge between Riverton and Baxter Springs, known as the “Rainbow Bridge.”

In 1992, construction of a softer curve bypassed the Rainbow Bridge at Brush Creek. After a hard fight by the Kansas Route 66 Association, County officials agreed to leave the Brush Creek Bridge standing as a historic landmark. Today, the bridge can be viewed in its historical setting and can be driven by south-bound traffic only.

Now that you’ve enjoyed the quaint tiny town of Riverton, head down the road to Kansas’ First Cowtown – Baxter Springs for more Route 66 icons and a wealth of Old West history.