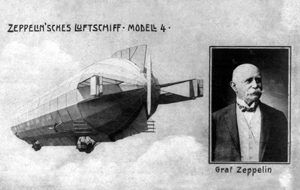 A Zeppelin is a type of rigid airship named after the German Count Ferdinand von Zeppelin who pioneered rigid airship development at the beginning of the 20th century.

Air Freight, n. – Freight transported by aircraft was first referenced as air freight regarding Zeppelins in 1919.

Ad-lib, v. – This staple of comedy and improvisational theater appears this year, although there is an older adverbial use of ad-lib in music meaning to extend a musical phrase and introduce variation as the musician sees fit. Short for Latin ad libitum, literally: according to pleasure

Bagel, n. – A hard ring-shaped bread roll was first mentioned in the dictionary, spelled beigel. The dictionary also has an 1892 citation for Beuglich. The word is from the Yiddish beygel, ultimately from Old High German boug ring.

Bimbo, n. – A variant on the Italian bambino. This word was originally applied to men and was simply a contemptuous way to say “guy, fellow.” By 1927 bimbo was being applied to attractive women of limited intelligence.

Chai, n. – This entry, first cited in 1919, was marked as military slang for tea. However, there is the older word, cha, from the Mandarin word for tea, whose English use dates to the early 17th century. Today, the word is commonly applied to a sweetened brew of spiced tea, especially those made in India.

Collage, n. – An abstract art form using clippings from various media sources not normally associated with one another, such as newspaper clippings, parts of photographs, theater tickets, etc.

Copacetic, n. – This Americanism term for “fine, excellent” was first found in print in 1919.

Cross-selling, n. – To sell or try to sell similar or related products or services to an existing customer. 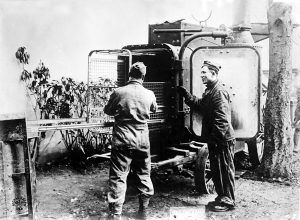 Delouse, v. – To rid a person or animal of lice as a sanitary measure was first used in reference to World War I armies.

Dunk, v. – To submerge in a liquid. The action of dipping something into your coffee didn’t have a name until 1919. The term is from the Pennsylvania German dunke, and ultimately the German tunken. The verb was being used in basketball by 1937.

Encode, v. – To convert a message, or information into code. The verb “decode” dates to the 1890s, but it took a few of decades for its partner to appear. Computing sense is from 1955.

Fox-hole, n. – Military term from World War I, meaning a small pit, usually for one or two soldiers, dug as a shelter in a battle area.

Heavy-lifting, adj. – Like air freight, this term came from the transportation and shipping business. It refers to the capability to move and ship large, indivisible items. The 1919 citation refers to items weighing two metric tons, which would not be considered a job for heavy-lift today. 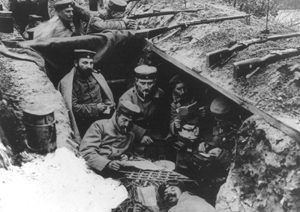 Jerry, n. – This is a nickname for Germans, particularly German soldiers.

Mercurochrome, n. – An over-the-counter antiseptic that was in common in household first-aid. In 1919, researchers at Johns Hopkins University in Baltimore discovered its antiseptic properties. In 1998, after a run of nearly eighty years, the U. S. Food and Drug Administration halted its sales in the United States because it contains mercury. It’s still available in other countries.

Naugahyde, n. – Naugahyde is a fabric covered with a rubber or vinyl resin and finished to resemble leather. It derives its name from Naugatuck, Connecticut, where it was originally manufactured.

Offline, adj. and adv. – This word that is popularly used in network computing today, began in 1919 in railroad operations including ticketing, planning, and administration that were conducted in offices some distance away from the rail lines. The computing sense doesn’t appear until 1950.

One-world, adj. – In the aftermath of World War I, the idea we all live on a single planet and that we shouldn’t let political considerations divide us. The idea gave rise to the League of Nations. 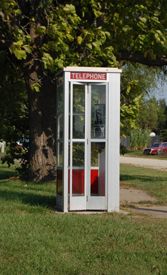 Payphone, n. – The word payphone was new in 1919, but, the concept was not. The pay telephone dates to 1917, and pay stations, where one could pay to make a telephone call, appeared as early as 1888.

Penne, n. – In 1919 you could start ordering penne pasta and expect English-speaking waiters to understand you. The word is from the Italian word for feather, as the tube-shaped pasta resembles the shaft of a quill.

Phooey, int. – People have probably been making this sound since before there was language, but in 1919 it got a new name.

Pokey, n. – This American slang term, meaning “prison, jail,” appears in the dictionary this year. It’s from the somewhat older pogey, a term dating to 1891 that means “poorhouse” or “home for the disabled.”

Recharger, n. – With the continued rise of electric-powered devices, this word was invented for devices that revitalize batteries. Its original use was in reference to automobile batteries.

Snookums, n. – A trivial term of endearment usually applied to children or lap-dogs. The dictionary compares it with diddums (1893) and Snooks (1860).

Spooking, n. – Between World War I and the influenza outbreak, some forty-six million people met untimely ends in less than five years. One inevitable result of this was a rise in spiritualism and the occult as hucksters and cheats preyed on the bereaved, offering to contact their lost loved ones. Spooking was a term that came out of this trend, referring to a séance or an invoking of spirits.

Supersonic, adj. It would be decades before humans would create a vehicle that exceeded the speed of sound, but in 1919 it was possible to accelerate certain objects, such as bullets, faster than sound, and engineers had invented a term for it.

White-collar, n. and adj. – This term for a worker engaged in non-manual labor first appeared in Upton Sinclair’s 1919 The Brass Check, which is about journalism. The term “blue-collar” doesn’t appear until 1950.

Wonky, adj. – Slang for shaky, groggy, unsteady, unreliable; not trustworthy. Particularly used in regard to electrical devices and machinery. Its sense meaning “bookish, nerdy” appears in 1978.