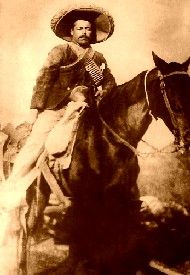 Pancho Villa in the Mexican Revolution

The story of Pancho Villa’s inglorious raid on Columbus, New Mexico on March 9, 1916, has been written about many times… but usually from a single or biased point of view. The following, in dramatic fashion, is as complete a version of events as the author could muster, encompassing the perspective from both sides of the battle, and from both sides of the border. It may be that Pancho was neither wholly a butcher nor wholly a hero, but both a fallible human and extraordinary person. The least honorable of all may have been the American, Mexican and German politicians who conspired and plotted for the sake of expedience, power or profit, at the expense of the common people of both aspiring nations. The raid on Columbus 90 years ago this month, marked the last organized Indian raid on U.S. soil, as well as the last invasion by foreign troops… as well as the transition into the technological age, and the end of what for better or worse was a uniquely Wild West.

It gets cold at 3 A.M. in March, even in the tail’s end of the New Mexico desert. If there were enough moon to see more clearly, you’d notice a small sleepy town intersected by railroad tracks. The landscape is primarily “tortilla flat….” and with only a few seductive hillocks. Just to the south of town, there stands a five strand barbwire fence stretching all the way from one side of the state to the other.

It would be hard enough to see it from the high ground where you sit, even in the middle of the day. The ground on either side of the fence looks exactly the same: white sands speckled with cholla, prickly pear, and golden snake brush. Sticker-laden coyotes chase jackrabbits back and forth beneath the wire, and a desert eagle high in the sky crosses over on his way North. And yet permeable as it may be, its cedar posts and taut strands were erected as a barrier, a border: where one government’s dominion ends, and where another country begins.

The town was founded as a border crossing and rail stop on the El Paso & Southwestern Railroad. It was named after Columbus, the very same Italian fortune hunter who in 1492 first laid eyes on the American continent, imagining he was in India. The word “Columbus” has since come to be synonymous with discovery, and it was no doubt the hope of the town promoters and developers that an increasing number of folks would “discover” the benefits of moving to such a fine little town.

“Town property in Columbus is one of the best possible investments,” asserted a McClughlan & Dexter Realty ad. “See Columbus before going elsewhere!”

“Elsewhere,” in the first two decades of the 20th Century, is a world apart. While you sit under the stars, surrounded by what appears to be a vast and incorruptible emptiness, greater society is remaking itself faster than ever before. Cultural traditions and technological innovations that used to take hundreds of years are now transformed in a single generation. This is the year that kids who are nostalgic for the disappearing frontier, got to play with a new toy called “Lincoln Logs,” and some guy named Albert Einstein will publish what he refers to as his “Theory of Relativity.” Jazz is hot in New Orleans, back east Margaret Sanger has been jailed for giving out pamphlets on birth control, and race driver Gil Anderson has just set a new automobile speed record by going an amazing 102.6 m.p.h. in a souped-up Stutz. In Europe Germany is using helium-filled Zeppelins from which to firebomb historic French cities. America’s involvement in World War I is only a year away. General John Taliaferro Thompson has just invented a handheld fully automatic weapon that will in time be called the “Tommy Gun….” but in out of the way places like Arizona and New Mexico the Old West lives on.

You’re part of a Southwestern subculture, wherein folks still pack around “Western” arms and are more likely to settle disagreements personally rather than resort to the insular objectivity of the law. On into the 1920s, there will still be more horses than cars in the borderlands where you were born, more cowboys than tourists, more deer than registered voters. Outside of trendy Phoenix or Albuquerque folks still dress much as their grandparents had, in wide-brimmed hats and dusty chaps. They continue to believe in the same standards of hard work and hearty play, of necessity and right. They’ve flourished like cactus in even the harshest environments, unconcerned with modernity, and generally seeking no one’s help but their own. Some are resilient “whites,” homesteading land and working on huge lowland ranches. Many are Mexican or Mexican-American, recent immigrants in search of better paying work. Other Latinos are the descendants of families that had already lived here for hundreds of years.

If people in this part of the country were anything, it was scarce. Columbus never had more than a few hundred permanent and temporary civilian residents, and most of the 600 man army detachment was likely to be gone on leave to El Paso at any given time. Tonight there are only a handful of electric lights or oil lamps burning. The only sign of activity in the army camp is a single small campfire in one of the ditches, around which a few sleepy sentries huddle to stay warm.

It’s then that you see what first appear to be shadows, weaving through the brush below. The whippoorwills are quiet all of a sudden, as you hear what you figure are a bunch of spike-jawed javelina spooked by the unexpected passage of serape-clad men.

You know immediately who they are, and you’ve had reason to expect them for a while now. For weeks you’ve been hearing rumors of impending trouble from the Mexican side, and a mere 35 miles away you had yourself ridden within rifle range of a camp of what could have been 500 or more Villistas: the soldiers of that fabled renegade revolutionary, Pancho Villa! Word is that he’s muy pissed-off. The U.S. has continued to supply rounds to General Carranza– that other self-serving contender in the continuing Mexican Revolution– but not to him. And then they really set him off by transporting Carrancista troops on a U.S. rail line. Politicians felt they had to put all their money on one or the other of the contenders, and they’d placed their bet on the probable winner.

More than once you’d tried to warn the camp commander– “that fool Slocum” as you put it– but he dismissed you with a wave of his hand like you were some wet-behind-the-ears pup! Others had warned him about the recent influx of suspiciously behaving Mexicans no one had ever seen before. Some Latino patriarchs had even moved their families to other towns in anticipation of what they called the “big trouble.”

Quickly you slip back to where your horse is saddled and tied, intent on giving the alarm. But you’ve barely started to slip your boot into the stirrup when you hear the first shots being exchanged below. A flurry of rounds follows, mostly random and ineffective. One stray bullet strikes directly above the 6 on the wall clock in the Columbus train station, stopping its hands forever, and fixing the exact time of the attack at 4:11 A.M.  The albazo (surprise attack) is at least temporarily successful. For the first time since the British sacked the White House during the War of 1812, the United States of America has been invaded.

“Pancho was a bandit voice
his horse was fast as polished steel.
He wore his gun outside his pants
for all the honest world to feel.”

The last skirmish with Indians in the Southwest is said to have been instigated by a small band of incorrigible Apaches, back in 1886…. and the battles for the Great Plains were essentially over by 1878 unless one wants to count that one-sided affair at Wounded Knee in 1890. But for the millions of indigenous and mixed-blood people of what is now known as Mexico, the Indian wars never really ended. With no foreign support, no sustaining treasury or arms factories the natives nevertheless continued their fight– first against the Spanish, its colonial financiers, and intruding allies. And then, once United States policies and actions had sufficiently sacrificed their position and wounded their pride, they grabbed their treasured Winchesters and smoothbore cannon and moved against us. Like the Cheyenne in at least one documented skirmish, they were beaten partly because they lingered too long looting the material goods of those they attacked. Indeed, the last time that a force of Indians confronted the U.S. Army was neither Geronimo’s final hurrah nor Wounded Knee…. but rather, it was the raid on Columbus in 1916.