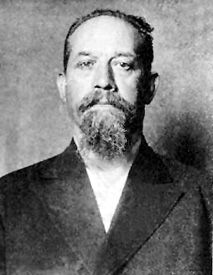 Luigi Galleani, Head of the Anarchism Movement in 1919

In seven U.S. cities, on the evening of June 2, 1919, all within approximately 90 minutes of one another, bombs of extraordinary capacity rocked some of the most significant urban areas in America, including New York; Boston; Pittsburgh; Cleveland; Washington; D.C.m Philadelphia; and Patterson, New Jersey. The bombings were a concerted effort among U.S.-based anarchists who were most likely disciples of Luigi Galleani, a vehemently radical anarchist who advocated violence as a means to effect change to rid the world of laws and capitalism.

Anarchism believes that society should have no government, laws, police, or any other authority. The majority of anarchists in the U.S. advocate change through non-violent, non-criminal means. However, a small minority believed that change could only be accomplished through violence and criminal acts.

On June 2, 1919, a militant anarchist named Carlo Valdinoci, a former editor of the Galleanist publication Cronaca Sovversiva and close associate of Luigi Galleani, blew up the front of newly appointed Attorney General A. Mitchell Palmer’s home in Washington, D.C. He also blew himself up in the process when the bomb exploded too early. A young Franklin and Eleanor Roosevelt, who lived across the street, were also shaken by the blast. 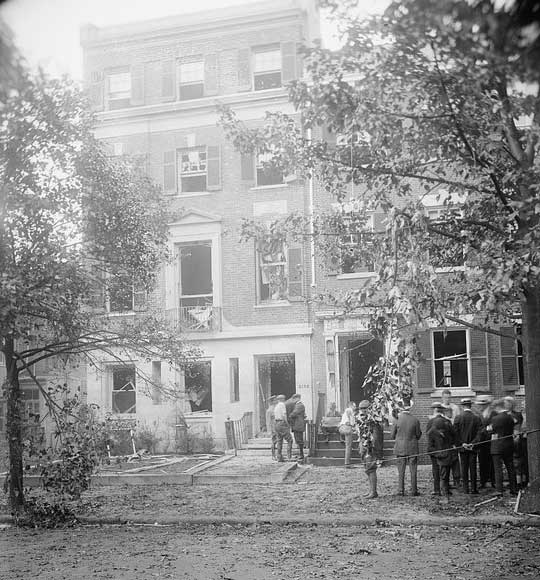 The bombing was just one in a series of coordinated attacks that day on judges, politicians, law enforcement officials, and others in eight cities nationwide. About a month earlier, in late April, radicals had also mailed over 30 booby trap dynamite-filled bombs to prominent politicians and appointees, including the Attorney General of the United States, as well as justice officials, newspaper editors, and businessmen, such as John D. Rockefeller, and the mayor of Seattle, Washington. Among all the bombs addressed to high-level officials, one bomb was notably addressed to the home of a Federal Bureau of Investigation field agent once tasked with investigating the Galleanists, Rayme Weston Finch, who in 1918 had arrested two prominent Galleanists while leading a police raid on the offices of their publication Cronaca Sovversiva. Though no one was killed in these bombings, one senator’s maid lost her hands.

The bombs of June 2 were much larger than those previously sent by mail in April. These bombs comprised up to 25 pounds of dynamite packaged with heavy metal slugs designed to act as shrapnel. Addressees included government officials who had endorsed anti-sedition laws and deportation of immigrants suspected of crimes or associated with illegal movements, as well as judges who had sentenced anarchists to prison.

Within minutes of the bombing of U.S. Attorney General Palmer’s home, more were exploding in other cities, including Philadelphia, Pennsylvania. Here, two bombs exploded within seconds of each other under the porch of the rectory of the Our Lady of Victory Catholic Church, caving in the porch and shattering every window in the rectory as well as those in the basement. The church was still smoldering when another bomb exploded less than a mile away at the home of Philadelphia jeweler Louis Jajieky. The interior of the Jajieky residence was utterly demolished, leaving only four walls standing.

During these bombings and simultaneous explosions in six other cities, none of the targeted men were killed, but one bomb took the life of New York City night watchman William Boehner.

Each of the bombs was delivered with several copies of a pink flyer, titled “Plain Words,” which read:

The flyer was later traced to a printing shop operated by two anarchists – Andrea Salsedo, a typesetter, and Roberto Elia, a compositor – who were both Galleanists. Salsedo committed suicide, and Elia refused an offer to cancel deportation proceedings if he would testify about his role in the organization. However, prosecutors could not secure enough evidence for criminal trials, but authorities continued to use the Anarchist Exclusion Act and related statutes to deport known Galleanists. 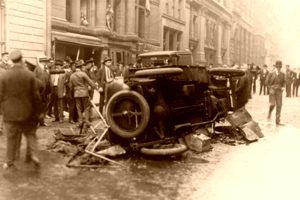 The federal investigation in Philadelphia was headed by Special Agent Todd Daniel and the Bureau of Investigation’s Acting Director, William Flynn.  Flynn, a former Secret Service agent, was an “anarchist chaser” and, according to Attorney General A. Mitchell Palmer, “the greatest anarchist expert” in the U.S.

Days after the bombings, Special Agent Daniel said that “the terrorist movement is national in scope, and it is not impossible that its headquarters is located in this city [Philadelphia].” Daniel also noted the large number of “anarchists in this city and so many places used by them for meeting places.” Daniel’s first thought was that the perpetrators of the Philadelphia bombings were members of the Industrial Workers of the Word (a leftist union that embraced socialistic principles). By June 5, federal and local investigators were tracking down members of the “bomb-throwing squad,” which was said to have included women. They had 12 radicals suspected of having a hand in the city’s attacks under constant surveillance.

This was already a time of high anxiety in America—driven by a deadly wave of the pandemic flu, the Bolshevik revolution in Russia, and the ensuing over-hyped “Red Scare,” and sometimes violent labor strikes across the country. The attacks it engendered angered Americans. Rather than fomenting revolution, the nation immediately demanded a response to the bombings, and the Attorney General, who had his eye on the White House in 1920, was ready to oblige. He created a small division to gather intelligence on the radical threat and placed a young Justice Department lawyer named J. Edgar Hoover in charge. Hoover collected and organized every scrap of intelligence gathered by the Bureau of Investigation (the FBI’s predecessor) and other agencies to identify anarchists most likely involved in violent activity. In the meantime, the young Bureau continued to investigate those responsible for the bombings. The Bureau of Investigation increased its efforts with the Immigration Bureau to round up and deport illegal immigrants who posed a threat to national security, including many Galleanists. The scope of the effort, poor preparation, and the abuse of the rights of those detained in the raids, though, led to a significant backlash against the Attorney General and the Bureau. The public’s support for the strong suppression of potentially dangerous aliens had limits.

Later that fall, the Department of Justice began arresting, under recently passed laws like the Sedition Act, suspected radicals and foreigners identified by Hoover’s group, including well-known leaders Emma Goldman and Alexander Berkman. In December, with much public fanfare, several radicals were put on a ship, dubbed the “Red Ark” or “Soviet Ark” by the press, and deported to Russia.

At this point, though, politics, inexperience, and overreaction got the better of Attorney General Palmer and his department. With the encouragement of Palmer and the help of the Department of Labor, Hoover started planning a massive roundup of radicals. By early January 1920, the plans were ready. The department organized simultaneous raids in major cities, with local police arresting thousands of suspected anarchists. But, the ensuing “Palmer Raids” turned into a nightmare, marked by poor communications, planning, and intelligence about who should be targeted and how many arrest warrants would be needed. The constitutionality of the entire operation was questioned, and Palmer and Hoover were roundly criticized for the plan and their overzealous domestic security efforts.

The “Palmer Raids” were certainly not a bright spot for the young Bureau. But, it did gain valuable experience in terrorism investigations and intelligence work and learned important lessons about the need to protect civil liberties and constitutional rights.

The attacks were never solved. Although the synchronized timing and power of the bombs had a psychological impact, the bombings were an enormous failure. None of the intended targets were killed. Many of their targets were not at home at the time of the attacks; some were still out on the town, while others were vacationing at summer homes. This suggests poor operational planning by the anarchists. Poor operational preparedness notwithstanding, the men who carried out these attacks were serious about killing their intended victims. They “boldly courted martyrdom” and, according to the Galleanists, the use of violence was a justifiable response to persecution.

Compiled and edited by Kathy Alexandr/Legends of America, updated December 2021.