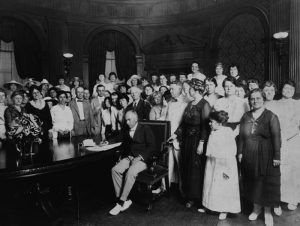 June 2 – In seven U.S. cities, eight mail bombs are sent to prominent figures as part of the anarchist bombings. All eight bombs exploded within approximately 90 minutes of one another, rocking some of the biggest urban areas in America, including New York; Boston; Pittsburgh; Cleveland; Washington, D.C., Philadelphia; and Patterson, New Jersey.

June 15 – Pancho Villa attacks Ciudad Juárez. When the bullets begin to fly to the U.S. side of the border, two units of the U.S. 7th Cavalry Regiment cross the border and repulse Villa’s forces.

June 28 – Treaty of Versailles is signed and ends World War I.

July 6 – The British dirigible R34 lands in New York, completing the first crossing of the Atlantic by an airship.

July 7 – September 6 – The First Transcontinental Motor Convoy from Washington, D.C. to San Francisco, California crosses the country using the incomplete Lincoln Highway. The purpose is to determine how well troops could be moved from one side of the country to the other by motor vehicles.

July 21 – The Wingfoot Air Express catches fire over downtown Chicago; two passengers, one crew member, and 10 people on the ground were killed. Two others were able to parachute to the ground safely. 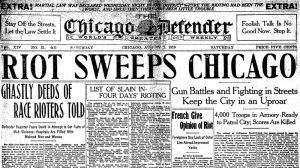 July 27 – The Chicago Race Riot of 1919 begins when a white man threw rocks at a group of four black teens on a raft.

August 11 – The first NFL team for Wisconsin (the Green Bay Packers) is founded by Curly Lambeau.

August 30-31 – After a three-way splintering of the Socialist Party of America, the leadership of the remaining 30,000 members of the Right Wing of the Socialist party continues their national convention in Chicago, Illinois. The leadership of the 10,000 native-born English speaking members of the Left Wing form the Communist Labor Party of America on August 31, 1919.

September 9 – About three-quarters of the Boston police force goes on strike. Massachusetts Governor John Calvin Coolidge acts quickly to dismiss the strikers, saying that no one has the right to strike against the public safety.

September 10-15 – The Florida Keys Hurricane kills 600 people in the Gulf of Mexico, Florida and Texas. 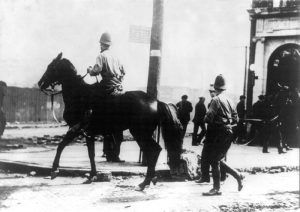 Police arresting protesters during the Steel Strike in Pittsburg, Pennsylvania, 1919.

September 26 – For the duration of the First World War and its immediate aftermath, the railways were removed from the control of private companies and managed by the National Government. In March 1919 the government announced its plans to standardize and reduce the wartime rates of pay and, after failed negotiations with the unions, the second national rail strike began at midnight on September 26-27, 1919. It lasted for nine days.

October 1 – The Elaine Race Riot breaks out in Arkansas.

October 2 – President of the U.S. Woodrow Wilson suffers a massive stroke, leaving him partially paralyzed. The stroke incapacitated the president, his wife controlled access, and he remained in office, though he should have been removed. He worked minimally during the remainder of his term but did approve the Palmer Raids. Essentially, the country ran without a president for nearly 18 months. The public turned on Wilson over the assault on civil liberties, World War I, and the events of 1919, resulting in a humiliating rebuke in the 1920 election. 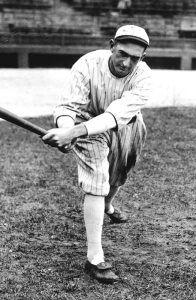 October 9 – In the first major scandal in Major League Baseball, and to this day, the worst, nine players from the Chicago White Sox throw the World Series to the Cincinnati Reds. It is forever known as the Black Sox Scandal with players, such as immortal Shoeless Joe Jackson, banned from the game and Hall of Fame forever.

October 16 – Ripley’s Believe It or Not! first appears as a cartoon under this title in The New York Globe.

November 7 – The first Palmer Raid is conducted on the second anniversary of the Russian Revolution. Over 10,000 suspected communists and anarchists are arrested in twenty-three different U.S. cities.

November 10 – The first national convention of the American Legion is held in Minneapolis, Minnesota.

November 11 – The Centralia Massacre in Centralia, Washington results in the deaths of four members of the American Legion, and the castration and lynching of a local leader of the Industrial Workers of the World.

November 19 – The Treaty of Versailles fails a critical ratification vote in the United States Senate. It will never be ratified by the U.S. 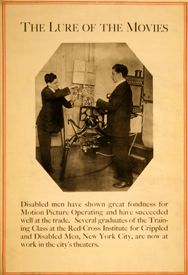 The lure of the Movies, 1919 – Poster encouraging employment of disabled veterans of World War I

Harold Lloyd begins holding test screenings of his films and modifying them based on audience feedback, a technique which is still used today.

The number one fiction of 1919 was The Four Horseman of the Apocalypse, later made into a movie. A single copy sold for $1.90 – industry insiders felt the public would never pay $2 for a book but were happy to be proved wrong!

The Miracle Man was Lon Chaney’s breakthrough film – it first brought his physical skills and makeup abilities to the screen, in his grotesque character portrayal of a fake cripple (a contorted figure named the Frog) who was healed by the title character, a faith healer named The Patriarch. Chaney would go on to become the greatest US horror star of the period, collaborating with Universal and MGM director Tod Browning on ten feature films from 1919 to 1929, beginning with Universal’s The Wicked Darling.

Charlie Chaplin begins work on The Kid, his first feature film. His co-star will be four-year-old Jackie Coogan. 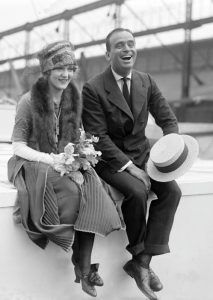