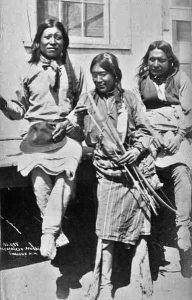 After bolting from the Fort Sumner Reservation in 1865, the Mescalero Apache hid themselves in the canyons of the Guadalupe and Sacramento Mountains of southern New Mexico. In small, swift-riding bands their warriors darted from the mountain hideouts to plunder, burn, and kill. Settlers and travelers along the Rio Grande and the Pecos River from Texas to north-central New Mexico lived in daily terror of Mescalero raids. Although Fort Stanton, New Mexico played the key role in contending with these Indians, Fort Union mounted one memorable offensive against them.

In September 1867 a Mescalero war party ran off 150 head of stock near Mora, in the mountains west of Fort Union. With Troop D, 3rd Cavalry, Captain Francis H. Wilson rode out of Fort Union in pursuit. The trail led south, toward the Mescalero homeland. Reinforced by another troop of the 3rd Cavalry from Fort Stanton, Wilson now had 107 men. The march led them to the forbidding Dog Canyon of the Sacramento Range, then across the Guadalupe Mountains, and finally south into Texas. 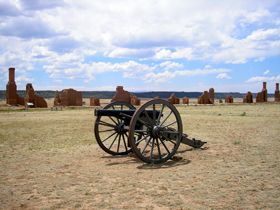 The rugged peaks of the Sierra Diablo rise starkly from the desert of West Texas, and here on October 18, 1867 Wilson finally caught up with the raiders. He surprised 30 to 40 warriors, dropped six in the first fire, and galloped off in pursuit of the fleeing survivors. The cavalrymen kept up the chase for 15 miles, then suddenly stumbled on a winter camp of 300 to 400 Mescalero Indians. While the women worked frantically to move the winter food supply to safety, the warriors fought off their assailants. For three hours the battle raged back and forth in the canyon. Wilson’s men took casualties of seven wounded but killed or wounded 25 to 30 of the Indians before they fled into the mountains. 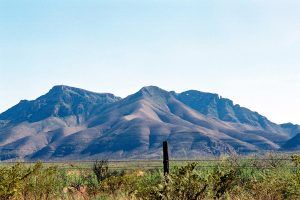 Wilson then led his command to Fort Bliss, Texas for supplies and medical attention, before marching back to Fort Union. He arrived on November 12th, having covered more than 1,000 miles of mountain and desert in less than two months. Although he had dealt the Mescalero a severe blow, it would be more than a decade before they were conquered for all time.