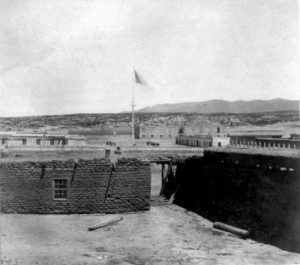 Fort Marcy, New Mexico, the first United States Army post established in the Southwest, was built at the outbreak of the Mexican-American War.

At that time, General Stephen W. Kearny and some 1,700 troops marched over the Santa Fe Trail, seizing Santa Fe on August 18, 1846. The next day Kearny ordered two of his chief engineers, Lieutenants William Emory and Jeremy Gilmer, to stake out a good site for a defensive fort, a crucial decision to prevent an uprising by Santa Fe citizens. Lieutenant Emory soon reported an ideal spot for the post atop a flat top hill, 650 yards northeast of Santa Fe’s plaza, describing it as “the only point which commands the entire town.”

Kearny agreed and within no time, soldiers and hired workmen began to build five-foot thick adobe walls, which were nine feet high in an irregular hexagonal polygon. The fortress was surrounded by a deep ditch. Within the compound, an adobe blockhouse and powder magazine were built to store artillery and weapons.

Though the plan originally intended the compound to house some 280 men, no quarters were ever built. Instead, a few limited quarters were built outside the post, but the majority of both men and horses were lodged and corralled in and around the old Spanish military barracks next to the Governors’ Palace. Kearny named the new fort after William L. Marcy, then-Secretary of War.

The fort was never required to defend Santa Fe during the Mexican-American War, but it remained through the Civil War. During this time, the post saw little action and when the war was over, it was officially abandoned in August 1868. The walls soon began to deteriorate and what was left was later destroyed when a local citizen discovered a treasure trove of Spanish coins hidden at the old post. The find was reported in newspapers and soon the hill was filled with treasure hunters, digging up the entire area and ultimately destroying any remaining standing walls.

The government sold the Fort Marcy location at an auction in 1891. Later, the city of Santa Fe acquired the site in 1961 and established a scenic overlook of the city. Today, the site is located at Old Fort Marcy Park, 617 Paseo de Peralta. 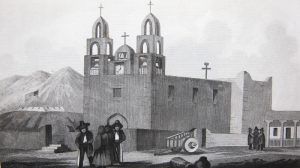