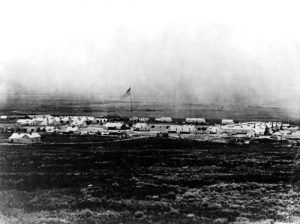 One of the oldest US Army posts in Utah, Fort Douglas, was established in 1862 on a rise overlooking Salt Lake City. The military ordered Colonel Patrick E. Connor and his California-Nevada Volunteers to build the fort with two primary objectives — guarding the overland mail and keeping an eye on the Mormons and any secessionist activities. Other tasks included protecting the area from Indians, guarding the transportation routes crossing Utah, and aiding road survey parties.

Commanding the Military District of Utah, Colonel Connor supervised Army operations in Utah, Nevada, and Wyoming. He and his troops first arrived in October 1862, living in hastily made dugouts covered by tents. The post was first called Camp Douglas in honor of the recently deceased Illinois Senator Stephen A. Douglas.

One of the few instances in which the troops saw action in the Indian campaigns was Colonel Connor’s 300-man campaign in the fall and winter of 1862-63 against marauding Shoshoni, Snake, and Bannock in northern Utah. In January 1863, he dealt a severe defeat to the Shoshoni Chief Bear Hunter in the Battle of Bear River.

When the Civil War ended, Regulars replaced the Volunteers, and soon talk of Mormon succession ended. The fort became a major supply center for the busy cavalry during the 1870s and 1874 to 1876; the fort was almost completely rebuilt of stone. In 1878, Camp Douglas became Fort Douglas.

During the Spanish American War and World War I, the fort was used as a training base, and in both World Wars, it served as a POW camp for enemy soldiers. After World War II, the Army slowly divest much of its acreage to the adjacent University of Utah. However, it continued to serve reserve forces for several decades.

On October 26, 1991, Fort Douglas officially closed. However, the Utah National Guard maintained control of the Military Museum and the southern portion of the fort, including the historic buildings on Soldiers Circle, which continues to be used as the headquarters of the 96th Army Reserve Command and as a base of operation for U.S. Navy and Marine Reserves.

Today the fort is designated as a National Historic Landmark, includes a museum inside one of the old stone barracks, the still-active 1863 cemetery, and numerous buildings. Grouped around the parade ground, stone buildings dating to 1875 include the old headquarters building, post office, stables, chapel, barracks, and officer’s quarters. The post cemetery includes the bodies of soldiers killed in the Battle of Bear River.

Though Fort Douglas’ rich history should be enough to entertain any visitor, some may be looking for another entirely different experience – the paranormal. Yes, Fort Douglas, like many forts across the American West, is said to be haunted.

The Fort Douglas Military Museum, housed in an 1875 building that was once called home to some 50 infantry soldiers, has served various functions over the years, including being utilized for office space, a fire station, a mess hall, a post office, and supply storage. A century after it was built, however, it became a military museum in 1975.

The fort’s most famous resident ghost is the spirit of a Civil War-era soldier who is fondly called “Clem.” Most often sighted at the museum, the ghost was given his name by a local Boy Scout Troop who decided “Clem” was a scary name for the ghost after spending a night in the museum. In any event, numerous reports have been told over the years of this dead soldier’s activities. 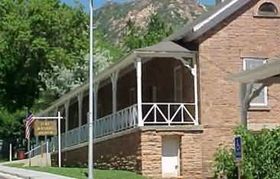 Numerous reports from staff and guests alike tell of Clem’s activities. Several people have seen the full-body apparition of the old soldier appearing in various places before quickly disappearing. Others have reported that they have felt spirit breathing on their necks. Yet more tales report the sounds of footsteps on the stairs when no one is there, other unexplained noises and objects that inexplicably seem to move by themselves.

Some who have seen the spirit describe him as a stocky man with dark hair and a beard, dressed in a Civil War Federal uniform. Some speculate that he may be the spirit of one of the many men who committed suicide at the fort. Clem has also allegedly been spied in the Mariott Library of the University of Utah.

Every year, in October, the museum hosts an event in Clem’s honor, telling the stories of this lively apparition, which paranormal groups have investigated on several occasions.

Though Clem is the most famous ghost of the fort, there are other reports of strange happenings on the grounds.

At Carlson Hall, which houses the history department and the ethnic studies program, a young woman who allegedly committed suicide in the 1930s, has been seen walking around the building all dressed in white. She is also blamed for the service elevator’s frequent malfunctions.

At the Humanities House on Officer’s Circle, a young girl is said to roam the building, and others have reported seeing a floating face. 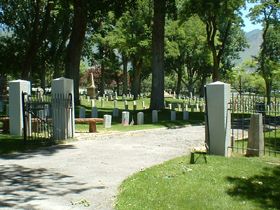 In Chapel Glen, there have been several reports of a ghostly woman dressed in purple, which has been spied in a gulley.

And, of course, the cemetery is said to have its share of ghosts as well. The still-active military cemetery houses regular soldiers of the fort and those who were killed in the Battle of Bear River and German, Italian and Japanese prisoners of war. Here, visitors have reported hearing the footsteps of someone or something that isn’t there.

The fort is located on the University of Utah campus at the northeastern edge of Salt Lake City.

Utah Forts of the Old West