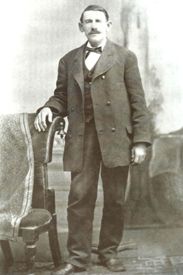 A cattle baron who moved longhorn herds from Texas into New Mexico in the mid-1800s, Chisum would work with Charles Goodnight and Oliver Loving, found one of the largest cattle ranches in the American West, and become involved in New Mexico’s Lincoln County War.

Born in Hardeman County, Tennessee, on August 15, 1824, Chisum’s family moved to Texas in 1837, where the teenager soon found work as a building contractor. Later, he would serve as the County Clerk in Lamar County.

In 1854, Chisum moved to Denton County, where he settled on Clear Creek, three miles above the town of Bolivar. He soon went to work for a prominent rancher as a cowboy and started to develop his own herd. During this time, Chisum purchased a mulatto slave girl named Jensie from some emigrants bound for California. The girl was just 15 years old and beautiful, and Chisum began a love affair with her. The couple had two daughters.

At the outbreak of the Civil War, Chisum freed all his slaves, including Jensie. He would later provide Jensie and his daughters with a home in Bonham, Texas, and financial support for their needs.

By the early 1860s, Chisum had developed his own herd of over 100,000 head of cattle and became one of the first to send his herds into New Mexico. He started a ranch in the Bosque Grande, about forty miles south of Fort Sumner. 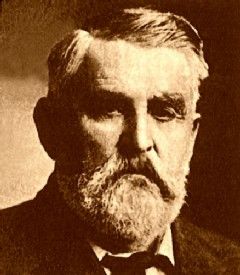 Charles Goodnight in his later years

In 1866-67, he partnered with cattlemen Charles Goodnight and Oliver Loving to drive herds of cattle to the Army in Fort Sumner and Santa Fe, New Mexico. When Loving succumbed to a Comanche arrow in 1868, Chisum continued his partnership with Goodnight, prospering over the next five years.

In 1875, he purchased the 40-acre South Spring Ranch, three miles south of Roswell, New Mexico, and made it his headquarters of a cattle ranching empire that extended for 150 miles of land along the Pecos River.

During this time, Chisum befriended Lincoln County, New Mexico lawyer Alexander McSween. McSween and John Tunstall were in a bitter feud with Lawrence Murphy and James Dolan, who owned the only store in Lincoln County and monopolized the area’s economy. Chisum backed McSween and Tunstall when they opened a rival business in 1876 and began challenging the large profits that Murphy and Dolan recognized. The feud eventually led to what is known as the Lincoln County War. Chisum does not appear to have had any direct contact in the furious gunfights and bloody battles. However, he was known to have given sanctuary and financial assistance to those fighting on the side of McSween and Tunstall.

Before the Lincoln County War was over, both McSween and Tunstall would be killed, and Billy the Kid would be a wanted fugitive. Governor Lew Wallace proclaimed an amnesty for all those involved in the bitter feud, except for Billy.

Though Billy the Kid and Chisum supported the same side in the bitter struggles of the Lincoln County War, the two would be at odds once the war was over and amnesty proclaimed for those who participated. When Billy the Kid went to see Chisum, believing that the cattle baron owed him $500, Chisum refused to pay. In retaliation, Billy and his gang of “Rustlers,” including Dave Rudabaugh, Billy Wilson, Tom O’Folliard, and Charles Bowdre, began to steal Chisum’s cattle.

In 1880, Chisum supported the election of Pat Garrett as Lincoln County Sheriff, who he believed could stop the cattle rustling problems in the area. Chisum was right.

In December 1880, Garrett shot dead Tom O’Folliard and Charles Bowdre. Soon afterward, Billy the Kid, Dave Rudabaugh, and Billy Wilson were captured. Billy the Kid was able to escape, but Garrett tracked him down to Fort Sumner, New Mexico, where he killed him on July 14, 1881.

In 1883, Chisum discovered a tumor on his neck and traveled to Kansas City for treatment the following year. His tumor was removed, and he returned to New Mexico. However, his health continued to deteriorate, and he then traveled to Eureka Springs, Arkansas, to partake of the “healing waters.” But, the tumor returned and grew larger.