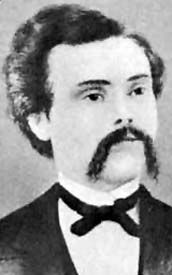 Alexander McSween was lawyer in Lincoln County, New Mexico, who, along with partner, John Tunstall, opened a rival store in Lincoln, vying for the business that had been controlled by the Murphy & Dolan Mercantile and Banking. This rivalry was the cause of the infamous Lincoln County War.

Alexander Anderson McSween was born in Canada and grew up serving for a time as a preacher. Afterward, he attended law school for one year, in St. Louis, Missouri before moving to Kansas, then to New Mexico Territory. He married Susan Hummer in 1873. After he arrived in Lincoln County, New Mexico, McSween worked for Murphy-Dolan as an attorney, then left them to work for John Tunstall, with whom he became close friends and by 1876, business partners.

Alarmed by McSween and Tunstall’s plans, Murphy and Dolan attempted to put the pair out of business, harassing them legally, and when that did not work, Dolan tried to goad Tunstall into a gunfight. However, Tunstall refused to use violence himself, but soon recruited Billy the Kid, and a half dozen other tough cowboys to protect him and his investments. In February 1878, Tunstall was killed by the rival faction, igniting the Lincoln County War.

On July 19, 1878, McSween and his supporters, including Billy the Kid, were besieged by their opponents in McSween’s house. His home was set on fire and several people were shot dead as they came out of the house, including an unarmed Alexander McSween.