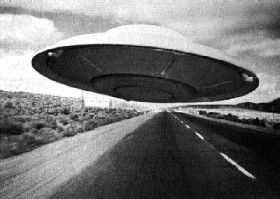 The hot summer of 1947 brought something new to Roswell, New Mexico, other than it historic contingent of Indians, Spaniards, longhorn cattle, chili farmers, and plenty of cowboys. This was something new! And, it wasn’t arriving along the usual dusty trail, but rather, from the skies above.

That was the summer that the Roswell skies, as well as the heavens all over America, were filled with unidentified flying objects – UFO’s!

The first report came in on June 24, 1947, when pilot Kenneth Arnold reported seeing a disc-shaped object flying at high speed near Mt Ranier in Washington. After this report hit the news, hundreds of other reports of “flying saucers” were reported across the country.

But, Roswell was to become home to one of these mysterious objects, disrupting its quiet pace and making it an immediate destination for all manner of researchers, military personnel, and curiosity seekers, a fate that continues to this day.

It was June 14, 1947, when William “Mack” Brazel rode out on the J.B. Foster Ranch, which Brazel operated to check the stock. Riding along with him was his neighbor’s, Floyd and Loretta Proctor, son. The pair soon came upon a large amount of strange debris spread throughout an area of about 200 yards. 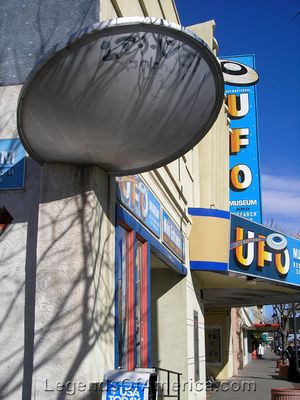 Comprised of brightly glittering tinfoil type material, dark grey rubber-like strips, and bits of what looked like thick paper, Brazel didn’t know what to think of it. Further inspecting the area, Brazel also found a shallow trench, several hundred feet long that had been gouged in the land. But, he had a job to do and ignoring the strange fragments, he went on about making his rounds of the ranch.

However, when he returned home from work, he told his wife about it and a couple of weeks later on July 4, 1847, they, along with their 14-year-old daughter, Betty, returned to the spot, gathering up quite a bit of the rubble and taking it home.

The very next day, he took some of the properties over to the neighboring Proctors to show them. It was the first time he heard about the many “flying saucers” that locals had reportedly seen in the area when Mrs. Proctor suggested it might be a piece of one of these strange objects.

The next Monday, July 7, when he went to town to do some business, he stopped in to see Sheriff George Wilcox, telling him of the find. Wilcox, in turn, contacted the Roswell Army Air Field, who sent head Intelligence Officer, Major Jesse Marcel, and head of the Roswell Army Counterintelligence Corps, Sheridan Cavitt, to investigate. The pair accompanied Brazel back to the ranch where they retrieved some of the material before returning with it to the Roswell base. The Army also cordoned off the site until all of the wreckage could be cleared.

The next afternoon, Lieutenant Walter Haut, Public Information Officer for the Roswell Airfield, under orders from base commander Colonel Blanchard, issued a press release reporting that a “flying disk” had been found “sometime last week” by a local rancher and that remains of it had been recovered by the Intelligence Office for transfer to “higher headquarters.” At about the same time, the United Press also reported that residents near the ranch had seen “a strange blue light several days ago about 3 a.m.” These two reports caused a mass reporting frenzy as phone lines to New Mexico, the Pentagon, and Washington D.C. were flooded by reporters clamoring for more details.

However, just hours after the press release went out, another was published from Brigadier General Roger Ramey, the head of the Eighth Air Force in Fort Worth, Texas, claiming the first release was untrue, and that in fact, the object retrieved was nothing more than a weather balloon with a radar target attachment. The second press release appeared in the press on July 9th.  Later, he would add that the balloon was a foil-covered box kite with no identification markings or instruments.

To this, Brazel was astounded. He had previously found two weather balloons on the ranch, but neither looked anything like the debris that he found in June 1947. Afterward, Brazel stated that he wished he had never reported the finding and short of a bomb, would never do so again.

In the meantime, other strange things were happening in Roswell. One afternoon the Ballard Funeral Home received several curious phone calls from the Army Base. Taking the calls from the Mortuary Officer at the base, was a young mortician named Glenn Dennis. The soldier asked Dennis how he could get some small hermetically sealed coffins. He also asked questions about how to preserve bodies that had been exposed to the elements for a few days, without contaminating the tissue.

Dennis, obviously curious, drove out to the base hospital that evening where he saw several large pieces of the wreckage that included odd engravings sticking out of the back of a military ambulance. He then went to the hospital and began to visit with a nurse he knew until suddenly he was threatened by military police and forced to leave the premises.

Undaunted, Dennis made plans to meet with the nurse the next day who told him that several strange little bodies had been found and drew pictures for him. Just a few days later, the nurse was allegedly transferred to England and even today, her whereabouts remain unknown.

Other strange things were also happening. When Bud Payne, a rancher at Corona was trying to round up a stray in the area where Brazel had found the debris, he was spotted by military personnel and escorted away. Other locals who tried to approach the debris field were also forcibly turned away.

The shrouded mystery and accompanying controversy began almost immediately which has ultimately led to a number of investigations by private citizens, reporters, and ultimately the Air Force, in 1994. 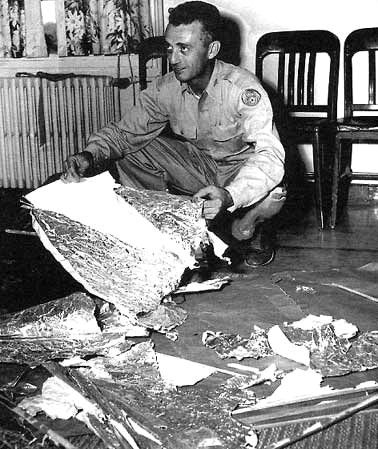 Major Marcel at Fort Worth, Texas with balloon debris. Though this “staged” picture of Marcel with weather balloon material was widely published, Marcel would say later the material he picked up at Brazel’s ranch was not part of any kind of weather balloon or experimental balloon.

One report alleged that the military had been watching an unidentified flying object on the radar for four days in southern New Mexico, when they detected that the object was on the ground on July 4, 1947.

An eyewitness William Woody, who lived east of Roswell, backed this report up when he stated having seen a brilliant object plunge to the ground on the same evening. When he had his father tried to find the crash site, they were stopped by military personnel, who had cordoned off the area.

Major Jesse Marcel, the head of Roswell’s Army Counterintelligence Corps, who was sent to investigate Mack Brazel’s story would later remark that “something must have exploded above the ground and fell.” He also described the debris saying that the tinfoil type substance was indestructible and would describe some of the material thusly: “I didn’t know what we were picking up. I still don’t know what it was…it could not have been part of an aircraft, not part of any kind of weather balloon or experimental balloon…I’ve seen rockets… sent up at the White Sands Testing Grounds. It definitely was not part of an aircraft or missile or rocket.”

Another later statement made by then retired Brigadier General Thomas DuBose, the chief of staff of the Eighth Air Force said, “[It] was a cover story. The whole balloon part of it. That was the part of the story we were told to give to the public and news and that was it.” General Dubose would also say that he personally received the order from Washington to start a cover-up.

The inconsistencies of the account were abundant. Beyond dispute is the number of military and civilian witnesses who gave very different versions of what they had seen, none of which supported the weather balloon description released by the Air Force base.

If these two conflicting accounts of the debris were not enough, later stories would emerge that the military had also recovered an intact alien aircraft, complete with the alien bodies. These accounts have since become known as the “Area 51 Cover-up.”

There are several theories promoted by UFO proponents including a mid-air collision between two alien spacecraft or that the craft was struck by lightning.

Though the U.S. Government continues to deny that aliens have visited our planet, much of the American public believes that the earth has been visited by aliens and Roswell is, in fact, the site of a UFO crash. 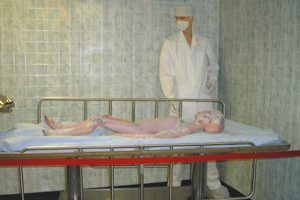 “Alien” on display in the Roswell, New Mexico UFO Museum

In any event, there is no doubt this mystery, as well as UFOs in general, is of fascinating interest to the American public and the entire world. In 1991, two of the original witnesses involved in the “Roswell Incident” decided to open a museum to inform the public of what really happened. These two men were Walter Haut, the Public Information Officer at the Army Air Field who issued the first press release, and Glenn Dennis, the mortician working at the Ballard Funeral Home that fielded the strange questions from the Army base. The two witnesses then called upon Max Littell, a local real estate developer for assistance, and three men started the museum.

The International UFO Museum and Research Center welcomed nearly 150,000 visitors during its first four years of business. Dedicated to the collection and preservation of the many materials written about the 1947 Roswell Incident and other unexplained phenomena related to UFO research, the museum had grown so much by 1996, that it had become the top tourist destination of New Mexico. The next year, the museum was rededicated at a new location as the number of visitors continued to increase and interactive technologies were built into the museum.

A visit to the museum will provide visitors, not only with the history of the event but also alleged debris, allegations of the civilians being threatened by the US Army,  depictions of UFOs, books and other research material.

Roswell, New Mexico has become synonymous with UFOs and unexplained phenomena and in addition to the museum also hosts an annual UFO festival each summer. 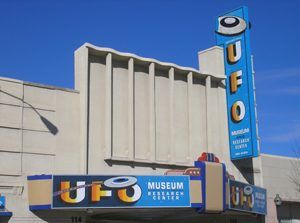