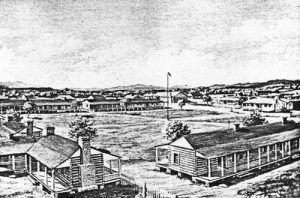 Fort Arbuckle, Oklahoma was established in April 1851 by Captain Randolph B. Marcy and Company D of the 5th U.S. Infantry. The post was named for General Matthew Arbuckle, the Commander of the Military Department of Missouri, who died of cholera on April 11, 1851. Built in the mostly unsettled Indian Territory, its purpose was to protect the “Civilized” Indians, including the Chickasaw and Choctaw, from the Kiowa and Comanche, as well as protecting emigrants making their way to the California gold fields using the trails between Fort Smith, Arkansas and Santa Fe, New Mexico.

Erected in a rectangular shape, the log buildings included barracks, a commissary, quartermaster’s quarters, and officers’ quarters. Just outside the rectangle was a hospital and sutler’s store.

When Fort Sill was established, the troops were transferred and Fort Arbuckle was abandoned in the Spring of 1870. Today, all that is left of the site is part of a chimney from the officers’ quarters. A historical marker has been erected on Oklahoma State Highway 7 in Hoover, Garvin County.