A gunfighter and founding member of the Regulators during the infamous Lincoln County War in New Mexico, Frank MacNab was of Scottish descent.

By the early 1870’s he was working as a “cattle detective” for Hunter, Evans, & Company, which was managed by Texas cattleman John Chisum. One of Frank’s primary objectives was to track down rustlers who stole Chisum’s cattle, so when Chisum moved his operation to New Mexico in 1875, MacNab followed.

During this time, Chisum befriended a Lincoln County, New Mexico, lawyer by the name of Alexander McSween. McSween, along with John Tunstall, was in a bitter feud with Lawrence Murphy and James Dolan, who owned the only store in Lincoln County and monopolized the area’s economy.

Chisum backed McSween and Tunstall when they opened a rival business in 1876 and began challenging the large profits that Murphy and Dolan recognized. Aligned with Chisum, MacNab also backed the new McSween-Tunstall operation and would soon find himself embroiled in the Lincoln County War. When John Tunstall was shot and killed, a group called the Regulators was formed to serve warrants upon Tunstall’s murderers. MacNab took a prominent role as second in command under Richard Brewer of the Regulator group.

On March 9, 1878, the group was pursuing two men named Frank Baker and William Morton, who were allegedly the men who had killed Tunstall. When the Regulators caught up with the two men; however, they had other ideas rather than to bring them in and planned to kill them. However, a minor Regulator, who was also thought to have been a Murphy/Dolan partisan, William McCloskey, objected to the killing. MacNab then shot and killed McCloskey while Baker and Morton fled. However, as the two tried to escape, they were gunned down, allegedly by Billy the Kid.

Less than a month later, the Regulators were involved in a shootout with law enforcement in front of the Lincoln County Courthouse on April 1, 1878. MacNab, along with Billy the Kid and several others, fired shots upon Sheriff William Brady, and his deputies, George Hindman, Billy Matthews, John Long, and George Peppin. When the smoke cleared, Sheriff Brady and Deputy Hindman were dead. 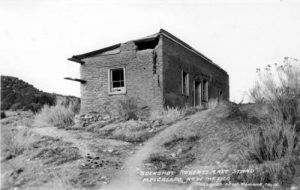 Three days later, on April 3rd, the Regulators were again involved in a gunfight at Blazer’s Mill, which resulted in the death Regulator leader, Richard Brewer. MacNab then assumed command of the Regulators but would not hold the position for long.

On April 29, 1878, when MacNab, along with Regulators, Ab Saunders and Frank Coe, were riding south of Lincoln, they were ambushed by the Seven Rivers Warriors. In yet another gunfight, MacNab was killed, Saunders was wounded, and Coe surrendered.

After MacNab’s death, Josiah “Doc” Scurlock then took the leadership role of the Regulators and vowed to avenge Frank’s death. Several weeks later, on May 15th, they invaded the Seven Rivers Warriors camp and killed Manuel Segovia, who had been the shooter in MacNab’s killing.

The Lincoln County War continued to rage until the governor threatened to declare martial law in the county in November 1878. In the end, all but Billy the Kid were given amnesty for their participation in the bloody battles, which claimed the lives of some 19 men