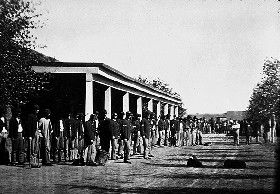 On October 31, 1862, Congress authorized the establishment of the military Fort Sumner at Bosque Redondo, to protect a new Indian Reservation situated on 40 square miles of land. The post was named for General Edwin Vose Sumner who died as the new fort was being built.

Though some officers discouraged the selection of Bosque Redondo as a site because of its poor water and minimal provisions of firewood, it was established anyway. It was to be the first Indian reservation west of Indian Territory (Oklahoma,) with plans to turn the Apache and Navajo Indians into farmers with irrigation from the Pecos River. They were also to be “civilized” by going to school and practicing Christianity.

To accomplish their plan, the U.S. Army made war on the Mescalero Apache and Navajo Indian tribes, destroying their fields, orchards, houses, and livestock. The Apache and Navajo, who had survived the army attacks, were then starved into submission. During a final standoff at Canyon de Chelly in Arizona, the Navajo surrendered to Kit Carson and his troops in January 1864. Carson ordered the destruction of their property and organized the Long Walk to the Bosque Redondo reservation, already occupied by Mescalero Apache.

Before long, a small settlement grew up around the military post that was populated not only by soldiers but also by ranchers, stockmen, and businesses supporting the fort.

However, from the beginning, the reservation was unsuccessful due to poor planning on the part of the government, as the Navajo and Apache had a long history of warfare. Once the Navajo were placed with the Apache on the same reservation, one can only imagine the conflicts that arose between the two tribes. 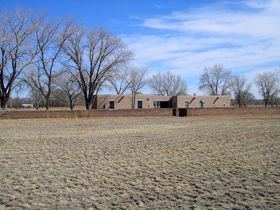 The ill-planned site, named for a grove of cottonwoods by the river, turned into a virtual prison camp for the Indians. The brackish Pecos water caused severe intestinal problems in the tribes and disease ran rampant. Armyworm destroyed the corn crop, and the wood supply at the Bosque Redondo was soon depleted. Most of the Mescalero Apache eluded their military guards and abandoned the reservation on November 3, 1865; but, for the Navajo, another three years passed before the United States Government recognized that their plan for Americanizing the Indians had failed. On June 1, 1868, the  Indians were allowed to return to their former homes and shortly thereafter, Fort Sumner closed forever.

In 1870 the old Fort Sumner buildings were sold to Lucien B. Maxwell, the former owner of the largest land grant in U.S. History. After paying some $5,000 for portions of the surrounding land and its buildings, Maxwell relocated his family from northeast New Mexico and refurbished the buildings into proper housing.

Lucien Maxwell soon turned over his affairs to his son Peter and passed away a few years later. When Billy the Kid arrived on the scene, Peter Maxwell and Billy became friends. On July 14, 1881, Sheriff Pat Garrett found Billy the Kid in a bedroom of the Maxwell home, ending the life of the teenage outlaw. 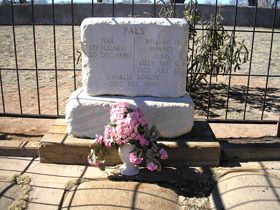 Billy the Kid was buried in the military cemetery at Fort Sumner along with two of his outlaw friends – Charlie Bowdre and Tom O’Folliard.

By 1884, Mrs. Lucien B. Maxwell and her son Peter had disposed of their old fort holdings.

When the railroad began to be built in the area in 1905, the 150 residents of Fort Sumner began to move their businesses and buildings some seven miles to the northwest to where the settlement of Sunnyside already existed.

In the beginning, there were two towns, Sunnyside and Fort Sumner. However, the Sunnyside Review reported on April 17, 1909, that the two side-by-side towns had resolved their differences and merged to become one town called Fort Sumner. The Sunnyside post office, which had been in operation since 1905, was changed to the Fort Sumner post office.

By 1940, Fort Sumner had reached a population of almost 2,000 residents with its chief industries being cattle and sheep ranching and farming of alfalfa, sweet potatoes, apples, grapes, and melons.

Though its population has since dropped to about 1,300 souls, Fort Sumner has a lot to offer in its history and surrounding recreational areas. While in this friendly western village, you can take a pleasant stroll along the historic Pecos River, visit the Billy the Kid Museum or see the historical WPA Murals located in the De Baca County Courthouse.

Seven miles southeast of town you will find the old Fort Sumner Museum and Cemetery, which hold’s Billy the Kid’s grave. Also there, is the Fort Sumner State Monument, including a visitor center that memorializes the Navaho’s Long Walk and the story of the Bosque Redondo  Indian Reservation. The Museum and Memorial are located four miles east on U.S. Highway 60/84 and south three miles on Billy the Kid Road.

Fort Sumner, New Mexico is located on U. S. Highway 60 halfway between Albuquerque and Lubbock, Texas, 160 miles each way. 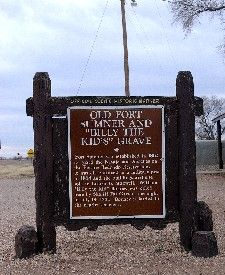 The Navajo Long Walk to the Bosque Redondo