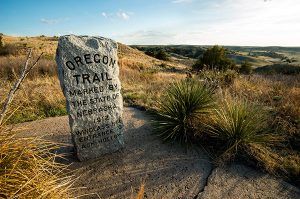 After negotiating the climb up California Hill, the emigrants along the Oregon-California Trail traveled 18 miles across the high tableland between the South and North Platte Rivers before descending Windlass Hill into the North Platte River Valley.

This was a favorite campsite for emigrants because it offered wood, pure water, and grass for the stock. Wagons descended the 25-degree slope of Windlass Hill for about 300 feet; subsequent erosion of the tracks worn by rough-locking the wheels has left at least five scars of trail ruts run down its side. From the top of the hill, trail ruts can be followed south until they disappear into a wheat field at the top of the plateau.

The source of the name is unknown as emigrants were not known to have referred to it as Windlass Hill. One pioneer named Howard Stansbury, who passed through Ash Hollow on July 3, 1852, commented:

“Here we were obliged, from the steepness of the road, to let the wagons down by ropes… The bottom of Ash Creek is tolerably well wooded, principally with ash and some dwarf cedars… traces of the great tide of emigration… plainly visible in remains of campfires, in blazed trees covered with innumerable names… total absence of all herbage.”

The site became a Nebraska state park in 1962. Another historic site, located about 2 ½ miles from Windlass Hill is also contained within the park. Ash Hollow Cave was created by a spring long ago and became an attractive site for human habitation. At least four distinct cultures used the cave as a base camp for hunting and food collecting for more than 1,500 years. Archaeological explorations have revealed that indigenous people used the cave as early as 1000 B.C. in the Late Archaic Period to about 1675-1725 when it was used by the Apache tribe.

The State Historic Park also includes the grave of Rachel Pattison, an 18-year-old newlywed who lost her life on the trail. A Visitor Center overlooking the canyon contains interpretive exhibits. The 40-acre Ash Hollow site also looks over the site of the Battle of Ash Hollow which took place in August 1855 between U.S. Soldiers and the Sioux Indians. 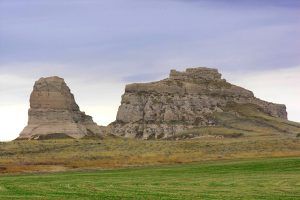 Courthouse and Jail Rocks on the Oregon Trail in Nebraska

Located near present-day Bridgeport, Nebraska, Courthouse and Jail Rocks are the erosional remnants of an ancient plateau that bisected the North Platte River. The rocks sit at over 4,050 feet above sea level and rise more than 240 feet above nearby Pumpkin Creek. Like Chimney Rock, these rock structures have long been recognized by pioneers as prominent landmarks on the transcontinental journey west. These sites were the first monumental rock features that emigrants would encounter heading west. The rocks also served as an important crossroads, where two major trunks of the Oregon and California Trails merged.

Apart from their historical significance as landmarks on overland trails during the 19th century, the northwest side of the rock complex boasts a Dismal River archeological site. Dismal River archeological sites have been found throughout western Nebraska. Artifacts obtained from the sites have helped archeologists document American Indians who are believed to have migrated into western Nebraska in about 1675. The remains of the Courthouse Pony Express Station, the first station west of Mud Springs, lie on the southwest corner. 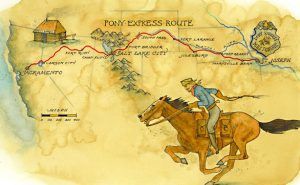 Mud Springs Station, a Pony Express site from 1860 to 1861, was located near present-day Dalton in Cheyenne County, Nebraska. Archeological evidence found at Mud Springs and the surrounding area suggests that Native Americans have occupied the region for centuries. It derived its name from the springs that come to the surface at the mouth of a long canyon between the Lodgepole Creek and North Platte River Valleys. When the pioneers arrived at these springs after a long drive over the high, dusty plateau they often found the springs muddy from the trampling feet of buffalo.

First surveyed in 1856, the town served overland travelers on the Julesburg cutoff by connecting Lodgepole Creek to the Oregon Trail. The springs represented the first significant opportunity for obtaining water in a 24-mile stretch of barren overland trail.

Buildings at Mud Springs were erected of sod in 1859, the roofs constructed of poles, brush, and earth with a layer of coarse gravel sprinkled overall to keep the wind from blowing the earth and brush away. In 1860, the Pony Express established a line along the Jules cutoff and created a station at Mud Springs. The place also had a stage station for coaches carrying passengers, freight, and mail. A stage passenger in the 1860s referred to the place as a “dirty hovel, serving tough antelope steaks, fried on a filthy stove, with wooden boxes serving as chairs at a bench like table.” In 1861, shortly before the Pony Express operations ended, a transcontinental telegraph station was positioned at Mud Springs, along with a daily stagecoach service.

In 1865, Sioux and Cheyenne Indians attacked the Mud Springs station. Having recently laid siege to the small town of Julesburg, Colorado to the south in retaliation for a massacre of Cheyenne at Sand Creek, Colorado, the Indians intended to deliver the same fate to Mud Springs. A quick-thinking telegrapher, however, sent a distress signal to Fort Mitchell, Nebraska and Fort Laramie, Wyoming. Within a day, U.S. troops were in place at Mud Springs to stave off any further attacks.

The Mud Springs Telegraph Station continued operations until the 1876 rerouting of telegraph lines that made the Mud Springs Station unnecessary. The area has had a vibrant history intimately tied to the Old West—as a station of the Pony Express, as a road ranch for weary westward travelers, and, finally, as a telegraph station.

No buildings or structures are still standing at the site, which a private owner donated to the Nebraska State Historical Society in 1939. A stone marker and signpost have been erected at the site to commemorate the station. The native-stone monument at the site has a bronze Pony Express symbol and plaque.