In September of 2009, we found ourselves on the Oregon Trail through Wyoming and found this historic landmark along the way. 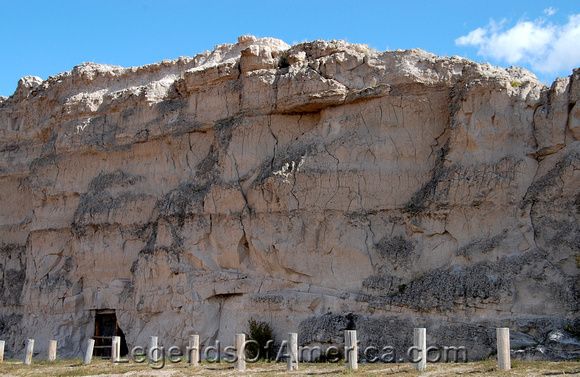 A large sandstone cliff located near Guernsey, Wyoming, Register Cliff is a chalk-like outcropping that rises some 100 feet above the floor of the North Platte River Valley. Also called Register Rock and Sand Point Station, thousands of pioneers camped here and inscribed their names upon the sandstone while traveling along the Oregon, California and Mormon Trails.

The horizontal precipice was created thousands of years ago by the erosive action of the North Platte River cutting through layers of soft sedimentary deposits.

Some of the first men to take advantage of the broad river bottoms which provided pleasing campsites were the early fur traders.

One of the first inscriptions on the rock was in 1829. Later, when westward expansion began in earnest, thousands of immigrants traveling along the Oregon, California and Mormon Trails, stopped to camp at Register Cliff to rest their livestock in the lush pastures near the river. Here, as well as at other “register rocks” all along the trails, the travelers inscribed their names upon the rocks.

In many cases, they simply wanted to make a statement that they had passed by, others left their signatures and messages to signal family and friends behind them, the date at which they had reached this point. Some left behind the names of those that they had lost during the hazardous journey. 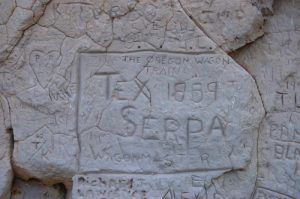 Register Cliff was the first camp west after leaving Fort Laramie and the pioneers often rested for a day or two here, giving them ample opportunity to carve their names and messages. Though many of the names and dates relate to the peak years of travel along the trail, during the 1840s and 1850s, others date further back to the days when only the trappers and traders ventured into this region. Unfortunately, there are also a number of 20th Century carvings that were made before Register Cliff came under protection as a historic site.

Several signatures have been tracked down by their descendants, including A.A. Withrow, who is thought to have been Abel “Abe” Alderson Withrow (1832-1911), a saddler from Indiana who moved to California. During the Civil War, he was a part of the “Fighting Californians” assigned to the 2nd Massachusetts Cavalry.

One of the most poignant signatures belongs to Alvah Hunt Unthank (A.H.). The 19-year-old, headed for the goldfields of California, carved his name into the sandstone on June 23, 1850. A week later he died of cholera on July 2, 1850, and was buried in a marked grave outside Glenrock, Wyoming. His gravesite is still intact sitting silently on a hill about five miles east southeast of Glenrock opposite the Dave Johnson Power Plant. Later, Alvah’s relatives would travel the same path. His cousin, O.N. Unthank [Oliver Nixon Unthank], signed the rock beneath his name in 1869, and Oliver’s son, O. B. Unthank, [Oliver Brandon Unthank], signed again in 1931.

At one time a small trading post was located near the cliff, which became a Pony Express stop in 1861, and later a stage station. The old Oregon Trail is visible a few yards below the cliff. 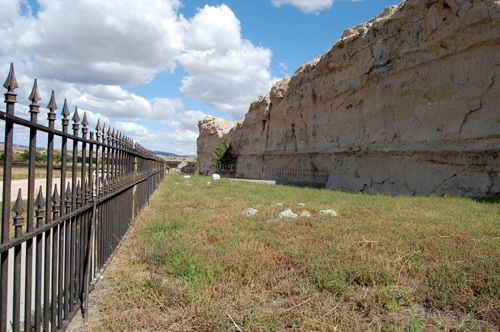 Hardship and illness were inevitable along the trail. Of the approximate 55,000 emigrants who traveled these trails during the peak years, some 5,000 died en route. Graves are scattered along the route, three of which sit below Register Cliff. These unknown immigrant graves are now protected by an iron fence.

Charles A. Guernsey, a pioneer cattleman after whom the nearby town of Guernsey, Wyoming is named, established his ranch buildings a short distance from Register Cliff in the 1890s. Guernsey continued to operate the ranch until 1926 when it was sold to the Henry Frederick family. Frederick began another ranching operation that continues to this day. The cave at the base of the cliff face was initially blasted to use for potatoes raised on the ranch, as the stone walls insulated the produce to keep it from freezing in the winter. Later, it was used for machinery storage.

Frederick gifted a portion of the Register Cliff Historic Site to the State of Wyoming in 1932 to be preserved as a memorial to the spirit and accomplishments of the pioneers. It was listed on the National Register of Historic Places in 1970.

Despite erosion by wind and water and later, effacement by vandals and tourists, much remains of the inscriptions left by the emigrants along the Oregon Trail. A Wyoming State Park today, a walkway and informative signs at the base of the cliff enable the visitor to learn more about this historic site.

Just a few miles to the west, just south of Guernsey is another Oregon Trail historic site called Deep Rut Hill at the Guernsey State Park. Here are the deepest ruts to be found on the old trail.

The California Trail –  Rush to Gold