When the beautiful Pennsylvania Station began to be demolished in 1963, it caused international outrage. Photo by Cervin Robinson, 1962.

Since America began to be populated by Europeans, numerous buildings and important sites were established. In these early years, the colonists were more interested in survival and later, in forming their own nation, to be too involved in preserving historic buildings. However, many did survive including those in the Independence National Historical Park in Philadelphia, Pennsylvania, and in the earliest Spanish settlements of St. Augustine, Florida, and Santa Fe, New Mexico. Spanish missions across the Southwest and California also still stand, as well as 17th-century buildings in New England.

But, over the years, a number of important and interesting sites have been lost, many due to the urbanization of cities and others to decay. The years between 1880 and 1920 changed American cities as they went through a period of industrial progress, and to make room for more important buildings, many of the old ones wore torn down. After World War II, many structures that represented first-of-a-kind technical achievements just years before became outdated and were demolished.

Over the next decades, more buildings were torn down as cities continued to grow. Many of these were demolished due to neglect, others due to health and safety reasons, some due to maintenance and upgrade costs, and more to the expansion and redevelopment of cities and roads.

But still, many historic buildings remained. In 1949, the US National Trust for Historic Preservation, a privately funded non-profit organization began and 28 states joined the organization. In New York City, the destruction of Pennsylvania Station in 1964 shocked many nationwide into supporting preservation. Soon, new laws began to protect buildings and entire districts. In 1966, the National Register of Historic Places was established, providing some protection to historic properties. However, this designation doesn’t prevent the demolition of a historic property if the site is a threat to society due to fire damage, asbestos, and/or neglect.

More recently, there has been a surge in interest in revitalizing historic downtowns that suffered in the last several decades due to the expansion of suburbs. Today, many people are responding to those revitalizations by revisiting downtown spaces for entertainment and buying and renting these character-rich spaces.

Our Vanished Sites Photo Gallery includes many historic landmarks that have been lost over the years, as well as other sites that were popular destinations for visitors and travelers in the last decades. These include many sites on old Route 66, as well as many other destinations that display former lodging facilities, diners, and roadside attractions. 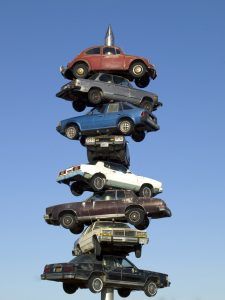 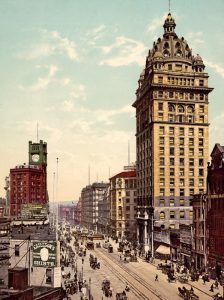 The ornate Call Building in San Francisco was built in 1898. But, over the years, its
decoratives friezes and arched windows were replaced in favor of an unadorned concrete tower. Even the dome at the top of the building was removed in an effort to modernize the building for the twentieth century. Today, it is painted in different shades of brown and tan, disappearing into the ever-rising skyline.